On Guns, Tim Kaine Appears to Blow With The Political Wind 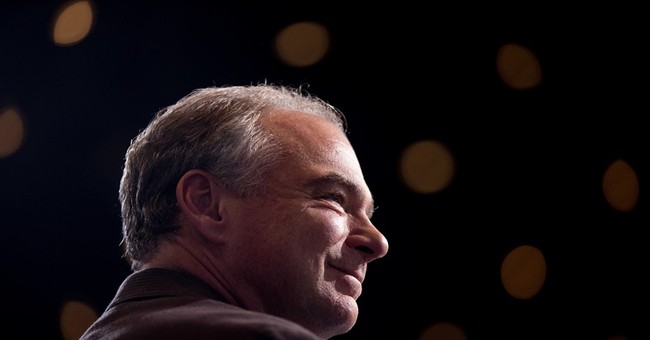 Sen. Tim Kaine (D-VA), Hillary Clinton’s choice for vice president, had to do a 180-degree turn on trade, and had to push back on allegations that he was switching his position on taxpayer-funded abortion; Kaine is supposedly a die-hard Catholic. He claims that his position on the Hyde Amendment hasn’t changed. That’s fine. But he also made similar promises on gun control in which it was explicitly obvious that the man blows with the political wind. As expected, sure, but still worth noting, especially if you’re in the pro-life camp—and that included the 30 percent of Democrats who describe themselves as such.

The Washington Post  documented the waffled path Kaine has taken on Second Amendment issues, from promising not to enact new gun laws, to pushing new gun laws. To saying he’s a strong Second Amendment supporter to voting for a slate of pro-gun control bill as a U.S. senator. Mr. Kaine, like most Democrats, has a complicated relationship with this fundamental human right:

When Kaine entered politics in Richmond in 1994, first as a city council member and then as mayor, the city was in the throes of a crack cocaine epidemic and had the second-highest homicide rate in the country. His support for gun control was popular.

The next year, when Kaine was running for lieutenant governor, he needed to convince rural Virginia voters that he wasn’t too liberal. He rebranded himself as an outdoorsman who supports the Second Amendment and appreciates guns used for sport.

In 2005, when Kaine ran for governor, his website simply declared: “Tim Kaine strongly supports the Second Amendment. As the next governor of Virginia, he will not propose any new gun laws.”

In the aftermath of the carnage [Virginia Tech Shooting], a Washington Post poll found that 58 percent of Virginians favored stronger gun control.

Kaine walked away from the pledge he had made as a candidate. He pushed unsuccessfully for a new state law that would require background checks on sales at gun shows. The bill drew fierce opposition from the NRA, which argued that the restriction would not have stopped the massacre at Virginia Tech because the shooter had bought his two semiautomatic handguns from licensed dealers. The bill died in committee.

By the time Kaine sought election to the U.S. Senate in 2012, Virginia was undergoing some profound demographic shifts that reset old assumptions… Yet he steered clear of gun issues in his race against former governor George Allen, a Republican and vocal gun rights advocate with an “A” rating from the NRA.

The Post added that Kaine, with Obama at the top of the ticket, was able to ride through to victory, thanks to the urban areas. He then became a surefire vote for any gun control legislation. Now, some could point to Kaine’s good work as governor to address mental heath issues post-Virginia Tech. Yet, like Clinton, Kaine seems to drift to what he really thinks when the polling looks more favorable. No wonder why he and Clinton are such a good pair.