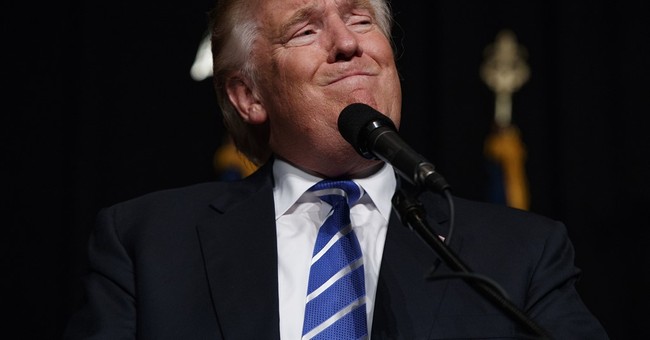 It’s a bit of older news, though something not entirely out of the ordinary coming from Donald Trump. After the conclusion of the Republican National Convention, he’s reportedly going to bankroll super PACs to go after Sen. Ted Cruz (R-TX), Ohio Gov. John Kasich, and another “small person” who the billionaire refused to name (via Bloomberg):

Donald Trump plans to create and fund super-PACs specifically aimed at ending the political careers of Ted Cruz and John Kasich should either run for office again, after both snubbed the Republican nominee during his party's convention this week, a person familiar with Trump’s thinking told Bloomberg Politics on Friday.

Donald Trump confirmed his plans during an interview with NBC's "Meet the Press" broadcast on Sunday, saying "I'll probably do a super-PAC, you know, when they run - against Kasich for $10 million, to $20 million against Ted Cruz."

Trump added that there may be "one other person that [he's] thinking about" starting an outside group against, but that unnamed individual is "such a small person" that he "hates to give him the publicity."

Former nomination rival Jeb Bush is apparently not the third person being eyed by Trump, even after skipping the convention and refusing to back the Republican nominee. On Friday Trump said he “does not care” about targeting Bush because the former Florida governor is already “destroyed.”

Is her referring to “little Marco”? I’m not so sure, given that Trump joined the McConnell’s incessant campaign, which in the end turned out to be successful, in coaxing the former presidential candidate to run for re-election for his Florida senate seat that boosted the GOP chances to retaining the Senate. Could it be Rand Paul? Carly Fiorina? How about Lindsey Graham? There are a multitude of candidates that I’m sure drove Trump’s blood pressure to rise over remarks about him and his business record, among other things. Yet, is this the time to even think about settling old scores?

After all, I would think he would take sober satisfaction in the fact that he handily beat both candidates in the primaries. He’s the nominee. It’s over. Now, can we focus on Clinton, who will have a mean fighting machine waiting to take him on in the general? As Mark Schnur, former communications director for the McCain campaign, wrote in The Wall Street Journal, the campaign isn’t like the primaries anymore:

But Donald Trump is no longer running in a Republican primary, where the winner is the candidate who can say the meanest things about Barack Obama and Hillary Clinton. Reaching out to new voters will require a new approach, and without that new approach, Mr. Trump’s uphill fight for the presidency becomes even more improbable.

There’s no doubt that Trump will do outreach efforts. He’s already doing them with Bernie supporters over trade. But these instances where he casually tells the media that he’s out for blood probably isn’t the best idea while he's doing this. Regardless, he’s a different candidate, he’s a master of nabbing media attention, and he will certainly not shift his strategy of tearing down his opponents during the debates. After all, it worked wonders for him in the primaries, but we shall see if it could yield a boost in the polls against Hillary.

Female City Workers in Kabul Ordered by the Taliban to Stay at Home
Landon Mion
Ford's Theatre Takes a Shot at Lincoln's Character
Spencer Brown
Is This Why Kamala Was AWOL When Biden Addressed the Collapse of Afghanistan?
Matt Vespa