DNC To Sanders Campaign: We're Sorry About Those Emails, But Let's Unite To Defeat Trump 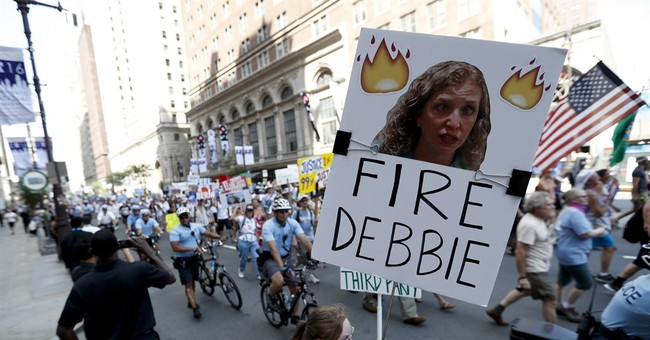 With the Democratic National Convention underway, the Democratic National Committee issued a formal apology to Sen. Bernie Sanders, his supporters, and the entire party as a whole over the controversy that’s erupted over leaked emails from the DNC, showing that staffers worked behind the scenes to undermine Sanders. It confirms what many have suspected, which is that the DNC was putting its finger on the scale in favor of Hillary Clinton. The revelation of these emails, days before the convention, has intensified Sanders supporters’ distrust (and disgust) of Clinton in Philadelphia. Earlier this afternoon, Sen. Sanders was booed by his supporters when he suggested that they vote for the Clinton/Kaine ticket.

It’s been a day highlighting the deep divisions present within the Democratic Party that have not healed since the end of the primaries. Nevertheless, this move by the DNC, and its incoming interim chair Donna Brazile, aims to smooth over those tensions and call (once again) for unity.

“These comments do not reflect the values of the DNC or our steadfast commitment to neutrality during the nominating process. The DNC does not–and will not–tolerate disrespectful language exhibited toward our candidates. Individual staffers have also rightfully apologized for their comments, and the DNC is taking appropriate action to ensure it never happens again,” read the statement.

So, it sounds that no one is going to be fired or forced to resign over this fiasco. All you need to do is just offer a half-hearted apology.

NEW: DNC statement APOLOGIZES to Sanders and his supporters pic.twitter.com/o1dsdDlZ0L

At the same time, isn't Brazile also another anti-Sanders Democrat. It sure seems so, thanks to the emails obtained by Wikileaks.

Did the #DNC seriously just swap the Chair fired for anti-Sanders bias with a different anti-Sanders official? pic.twitter.com/kTAntcz4NM