$50 Million Is Being Spent On Security In Cleveland. Where's It All Going? 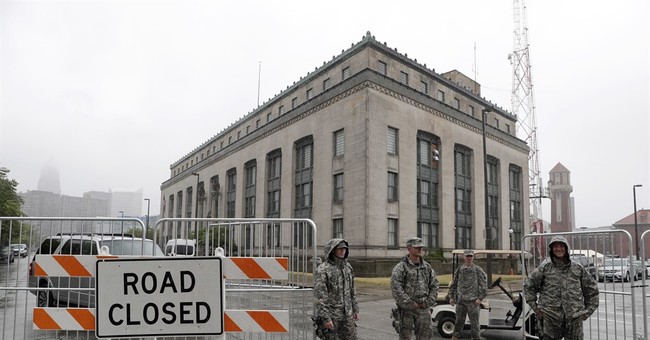 CLEVELAND, OHIO – The Republican National Convention is in full swing—and security is one of the things on the minds of many attending the convention. We’ve had a string of shootings targeting law enforcement and terrorist attacks leading up to the convention, so the city of Cleveland is going to use the $50 million it got from the government on everything from assault rifles, body cameras—one for every Cleveland police officer—additional police, federal officers, the national guard, bomb-diffusing robots, armored vehicles, and riot gear (via CNN Money):

Expect agents from ATF, FBI, FEMA and elsewhere. There will be 3,000 agents from Secret Service, TSA, Customs and Border Protection, and other agencies -- plus another 1,000 "U.S. government personnel."

Cleveland police has 550 officers -- a third of the department -- guarding the RNC. The rest are coming in from outside police departments.

The Department of Defense told CNNMoney that specialized teams of the Ohio National Guard will wait quietly in the background ready to respond if there are suspicions of radioactive and biological weapons in the area.

There’s also a no drone zone around the Quicken Loans Arena—the signs are near the security checkpoints. The news organization added that Philadelphia would be spending close to a similar amount—$43 million—on security for their upcoming convention next week. Granted, these aren’t extraordinarily high costs for security. In 2004, the government gave the Democrats and Republicans a total of $100 million to spend beefing up protective measures for their conventions that election year. At the same time, we never had horrific back-to-back shootings, where law enforcement was deliberately targeted.