Giuliani: Hey, Radical Islamic Terrorists–We're Coming to Get You 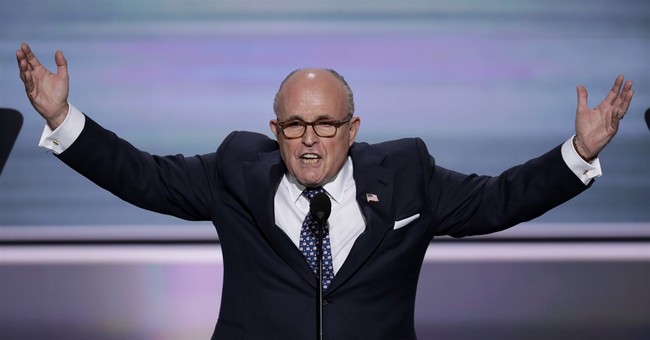 CLEVELAND,OHIO- Former New York City Mayor Rudy Giuliani (after taking what could possibly have been 10 red bulls) took the stage to address the delegates at the Republican National Convention in Cleveland. He started off by touching on the recent violence against law enforcement, and thanked the Cleveland Police Department for providing security at this event.

He added, “Police don’t care if you’re black or white.” They will come to save you regardless of race, gender, or sexual orientation.

He said that such unity could be achieved. He’s seen it. And he’s been there when it did happen when he served as the mayor of New York City.

“What I did for New York, Donald Trump will do for America,” he proclaimed.

As for the threats we face, Giuliani said that we must not be afraid to define our enemy. In the past several months, We’ve had five terrorist attacks executed against our allies and us. We know who the enemy is: radical Islamic extremism. Channeling his inner Trump, Giuliani said, “I did not say all of Islam. I did not say most of Islam. I said radical Islamic terrorism.” He prefaced this by saying he’s saying that for the cameras. To defeat them, we must put them on defense and commit ourselves to unconditional victory against them.

Giuliani added that Trump is a leader, whereas Clinton lied to the victims of the families about the circumstances of their death following a terrorist attack—a jab at Hillary over her statements made after the 2012 Benghazi attack. He added that we couldn’t trust Clinton to protect us.

Oh, and Rudy had one last thing he had to say to the terrorists: “We’re coming to get you.”