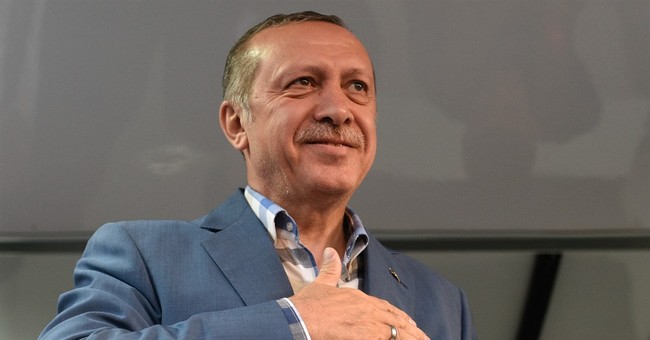 The attempted military coup is over—and President Tayyip Erdogan and his government have survived. Turkey is reeling from a tumultuous Friday evening, where some members of the military tried to usurp Erdogan from power. As dawn broke, it had become clear that the coup would fail. Now, over 2,700 judges have been fired, almost 3,000 military personnel arrested, and a cleansing promised for members of the military who were involved in this action. Yet, Erdogan wants one more thing: cleric Fethullah Gülen—who Erdogan blames for the coup. Gülen has been living in Pennsylvania in self-imposed exile. Erdogan made this plea to the United States (via CNN):

Erdogan's call for U.S. involvement in punishing his rival comes after Turkish authorities closed the airspace around Turkey's Incirlik Air Base, where his government allows the American military to launch operations in the air campaign against ISIS in Syria and Iraq.

"This country suffered a lot in the hands of the Gulen Movement," Erdogan told throngs of supporters near his home in Istanbul.

"I call on the United States and President Barack Obama ... (to) either arrest Fethullah Gulen or return him to Turkey," he added. "If we are strategic partners or model partners, do what is necessary."

At the heart of Erdogan's rivalry with Gulen is a fundamental division in Turkish society between secularists -- some within the country's top military brass -- and Islamists, including the president's AKP party.

That’s quite the demand based on zero evidence that Gülen is even involved in the coup. On top of that, Turkeys foreign minister blamed the U.S. for the chaos on Friday. It matters since a) Turkey is the only functioning secular Islamic democracy; b)they’re a NATO member, and c) they’re key to our anti-ISIS operations in the region—all of which was placed in jeopardy on Friday and remains so in the Erdogan government’s efforts to find who is responsible for the coup (via AP):

"Public insinuations or claims about any role by the United States in the failed coup attempt are utterly false and harmful to our bilateral relations," U.S. Secretary of State John Kerry told his Turkish counterpart, according to the State Department's readout of their telephone call.

The back-and-forth occurred against the backdrop of Turkey closing its airspace, effectively grounding U.S. warplanes that had been targeting Islamic State forces in neighboring Syria and Iraq.

At the center of the controversy stood Fethullah Gulen, who lives in exile in Pennsylvania and promotes a philosophy that blends a mystical form of Islam with staunch advocacy of democracy, education, science and interfaith dialogue.

Although he didn't outline any threat, Erdogan's emphasis on U.S.-Turkish counterterrorism cooperation raised the prospect of a prolonged closure of the Incirlik air base in southern Turkey if he didn't get his way. The Pentagon said it was trying to get permission to resume air operations from the base, while adjusting mission operations in the meantime.

In the meantime, Gülen told The Guardian that he feels the coup was “staged,” and that he has been against all military interventions. As for retuning to Turkey, he admitted that he misses his home country, but values freedom to live his life, which is guaranteed in the U.S. Secretary of State John Kerry added that no formal extradition for Gülen has been submitted by Erdogan:

In a rare and brief interview on Saturday with a small group of journalists at his residence in Saylorsburg, Pennsylvania, Gülen rejected all accusations that he was behind the coup attempt.

“I don’t believe that the world believes the accusations made by President Erdogan,” Gülen said. “There is a possibility that it could be a staged coup and it could be meant for further accusations [against the Gülenists].”

Gülen, who leads from exile a popular movement called Hizmet and split from Erdogan over a corruption scandal in 2013, spoke in a small prayer room, lined with woven rugs and decorated with Islamic calligraphy and leather-bound religious books. Reporters were served Turkish tea and sweet dry figs at his Pennsylvania compound, which he moved into after arriving in the US in 1999.

He said he rejected all military interventions, and said he had personally suffered after the coups of the 1990s.

No official extradition request had been made, according to the US secretary of state, John Kerry, who spoke to reporters in Luxembourg. “We fully anticipate that there will be questions raised about Mr Gülen,” he said.