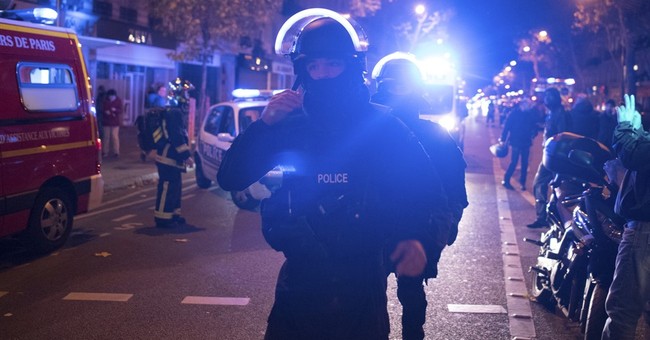 New information from a French government committee about the Paris Attacks has been released—and it’s ghastly. The Islamic State launched a horrific multi-faceted terrorist attack in the city, using a combination of explosives and assault rifles that left at least 120 people dead. One target was the Bataclan Theater, which was site where most of the victims were murdered. We heard gunfire and explosives caused most of the carnage, but now it appear torture and mutilation occurred during this horrific night. Louise Mensch at Heat Street wrote about the grisly details, which include women being stabbed in the vagina, eyes being gouged out, people disemboweled, castrated, and beheaded. And all of this was reportedly videotaped for propaganda purposes by the terrorists. Until now, this information had been suppressed by the French government (via Heat Street):

The chief police witness in Parliament said that an investigating officer, tears streaming down his face, rushed out of the Bataclan and vomited in front of him just after seeing the disfigured bodies.

According to this testimony, Wahhabist killers apparently gouged out eyes, castrated victims, and shoved their testicles in their mouths. They may also have disemboweled some poor souls. Women were stabbed in the genitals – and the torture was, victims told police, filmed for Daesh or Islamic State propaganda. For that reason, medics did not release the bodies of torture victims to the families, investigators said.

But prosecutors claimed these reports of torture were “a rumor” on the grounds that sharp knives were not found at the scene. They also claimed that maybe shrapnel had caused the injuries.

Q. For the information of the Commission of Inquiry….can you tell us how you learned that there had been acts of barbarism within the Bataclan: beheadings, evisceration, eyes gouged out …?

Investigator: After the assault, we were with colleagues at the passage Saint-Pierre Amelot when I saw weeping from one of our colleagues who came outside to vomit. He told us what he had seen.

Q. Acts of torture happened on the second floor?

A. Bodies have not been presented to families because there were beheaded people there, the murdered people, people who have been disemboweled . There are women who had their genitals stabbed.

Q. All this would have been videotaped for Daesh!

A. I believe so. Survivors have said so.

Mensch added that one of the prosecutors wanted to clarify these statements, noting that perhaps these horrific injuries were caused by the gunfire and explosives used in the attack—adding that no knives were found in the crime scene. The chairperson of the committee then asked how a victim’s genitals could end up in his mouth. The prosecutor had no answer.