Oh, The House GOP Tax Plan Will Increase The Economy By How Much, Again? 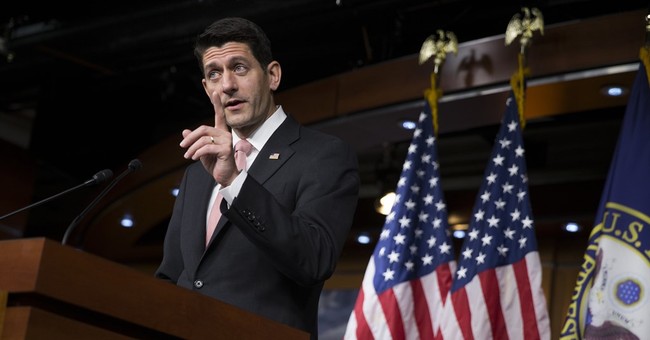 Hillary Clinton and President Barack Obama slam Republicans with either having no ideas or policies that don’t work. It’s going to be the Democrats’ go-to attack ever since the 2008 financial crisis, which wasn’t due to Reaganomics or George Bush’s tax cuts (that produced 52 months of uninterrupted economic growth)—but that’s a whole other matter. The fact is that the Tax Foundation has graded the House GOP tax plan, which would increase the economy, add 1 million+ jobs, and increase wages (via The Hill):

The House Republicans' tax-reform blueprint would increase the size of the economy in the long run by 9.1 percent and lead to an additional 1.7 million full-time equivalent jobs, an analysis released Tuesday by the conservative-leaning Tax Foundation found.

It said the wage rate would increase by 7.7 percent and capital investment would go up by 28.3 percent if the GOP tax plan became law.

The House GOP tax plan, one of six parts of Speaker Paul Ryan’s (Wis.) “Better Way” agenda, would lower the top individual tax rate to 33 percent and the corporate tax rate to 20 percent.

It would move the U.S. toward a consumption-based tax system, in part by allowing businesses to immediately write off the full costs of their capital investments. It also would eliminate a number of deductions and credits.

“The larger economy and higher wages are due chiefly to the significantly lower cost of capital under the proposal, which is due to the lower corporate income tax rate and the full expensing of capital investment,” wrote the Tax Foundation, which backs a simple, transparent and stable tax code.

Here’s the Tax Foundation’s conclusion in their analysis, which you can read here:

The House Republican tax plan would reform both the individual income tax and convert the corporate income tax into a destination-based cash flow tax. This plan would significantly reduce the cost of capital and reduce the marginal tax rate on labor. These changes in the incentives to work and invest would greatly increase the U.S. economy’s size in the long run, boost wages, and result in more full-time equivalent jobs. On a static basis, the plan would reduce federal revenue by $2.4 trillion, most of the revenue loss being from one-time transitional costs. However, due to the larger economy and the significantly broader tax base, the plan would reduce revenue by $191 billion over the next decade.

And just so we’re completely honest since the balance on those assets from the Clinton campaign will forever be at zero, she doesn’t really have an economic message of her own. In fact, that’s one of the debates among Democrats is whether she should lay down a concrete vision of her future agenda, or just attack Trump. They seem to be adhering to the latter in what appears to be a rehash of the “Kill Romney” strategy the Obama team used in 2012.

Nevertheless, there you have it. The Republicans have a plan that will boost jobs, wages, and economic growth, while Obama fights for one of the most dishonest presidential candidates in years, who is running on “I’m not nearly as bad as Trump.”