WaPo: Democrats Serving Up Some Whoppers About Guns 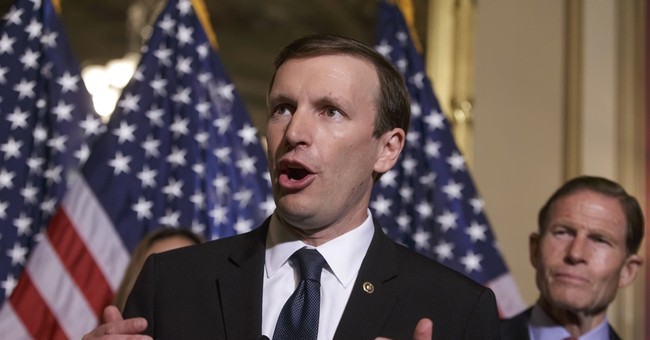 The Democratic filibuster in the U.S. Senate this week ended with an agreement with Republicans to vote on two pro-gun control amendments relating to expanded background checks and keeping those on terror watch lists from buying guns. On June 15, Sen. Chris Murphy delayed a spending bill that would fund the Department of Justice over the legislative body’s inaction to do anything on gun violence. It lasted over 14 hours. Yet, Democrats made some whoppers on the Senate floor—and The Washington Post was there

“What we know is that in States that have imposed those reasonable limitations, there are less gun crimes. There are less homicides.”

The data used in the National Journal chart calculates the number of gun-related deaths per 100,000 people by including all gun deaths, including homicides, suicides, accidental gun deaths and legal intervention involving firearms. We removed suicides from the totals and reran the numbers — and in some cases, it made a huge difference. Half of the 10 states with the lowest gun-death rates turn out to be states with less-restrictive gun laws.

Moreover, the counting of gun laws is certainly open to interpretation, so that also affects the outcome. It’s not enough to count laws to figure out the reasons gun deaths are lower in one state than another. One would need to specifically determine whether certain laws had an effect, over time, on the gun-death rate in a state.

So, in this instance, Murphy’s claim is worthy of Three Pinocchios because he specifically referred to homicides, rather gun deaths.

“AR-15-style weapons weren’t legal in the United States until 2004 after being banned for 10 years. It is not coincidental that there was a massive increase in mass shootings in this country after 2004.”

A 2004 study for the Justice Department found that the ban’s impact on gun violence was mixed, at best; if the ban were renewed, the “likely effects on gun violence are likely to be small at best and perhaps too small for reliable measurement.” The report said that assault weapons were “rarely used” in gun crimes.

A 2016 study published in Applied Economics by Benjamin M. Blau of Utah State University and colleagues also looked at whether state and federal laws on assault rifles affected whether the weapon was used in public shootings between 1982 and 2014.

the data shows that the ban was not particularly effective in the first place — and that mass shootings have not increased significantly since then [Murphy got three Pinocchios for this claim].

America is absolutely awash with easily obtainable firearms. You can go down to a gun show at the local convention center and come away with a fully automatic assault rifle, without a background check, and most likely without having to show an identification card. So what are you waiting for?”

It may not make sense to award Pinocchios to a dead al-Qaeda operative. In this case, Reid should have more clearly stated that Gadahn was not correct, even if he believes that his quote makes a noteworthy point.

Gadahn was killed in a drone strike in 2015. So, for lack of a better term, this filibuster was loaded with half-truths if not outright lies about gun statistics, laws, and regulations. Okay—maybe that's a bit much, but they were certainly inaccurate, with Democrats falling into the usual traps, like combining gun homicides with suicides to increase the kill rate, or mixing them up as in Murphy’s case. And after all of this, it’s dubious whether enough Republicans will sign off on these amendments. Sens. Susan Collins (R-ME), Mark Kirk (R-IL), and Pat Toomey (R-PA) might join the Democratic chorus, but I doubt others will. This was a likely act of terrorism, not domestic gun violence. Nevertheless, the filibuster itself shows the deep partisan divide concerning how Democrats and Republicans view this attack. Nevertheless, at least Murphy will be able to go to sleep at night knowing he tried to do something that in all likelihood is going to fail. So, if that’s the benchmark for Democratic action on gun control—bravo, sir. Oh, and even liberals think that combining terror watch lists and gun control isn’t the best idea. There are still quite a few of us who believe in due process of law. Call me an extremist, but you should only lose your gun rights after being convicted of a violent crime, not for mere suspicion of being a terrorist.

Oh, and for expanded background checks—the Orlando shooter had no criminal history. He still would’ve been able to legally buy firearms.