Liberal Blogger: Senate Democrats Forced Me To Side With The NRA 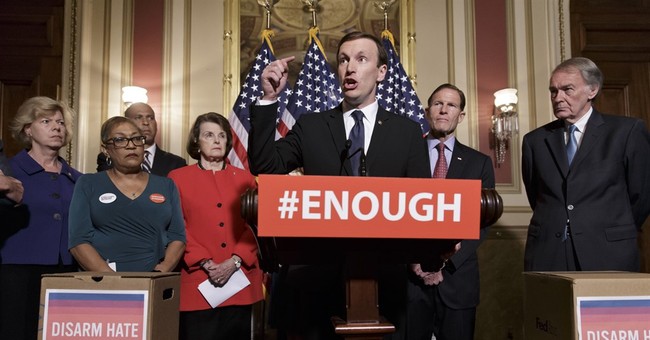 Kevin Drum, a liberal blogger at Mother Jones, said that Senate Democrats forced him to make a terrible decision: siding with the National Rifle Association. The latest push from the anti-gun Left of barring anyone on terror watch lists, lists (and I know I’ve written this ad nauseum) that are secretive and lack due process. The criteria concerning how one catches the attention of the FBI who maintains the database isn’t really known. It doesn’t seem to be specific, as a cub scout was considered to be suspicious of terrorist activities back in 2010. The point is the kid, Mikey Hicks, is innocent. I’m sure there are many more Americans wrongfully placed on these lists, but with no due process—it’s difficult to get your name cleared. Nevertheless, damn due process if it means restricting gun rights, am I right Democrats?

Now, Drum is in favor of other gun control initiatives, like a ban on high-capacity magazine, but he gives a forceful "no thanks" concerning stripping an American's gun rights if they happen to catch the eye of the FBI. [bold text indicates Sargent’s post]

Here's how it would work. The FBI would be notified anytime that someone on a "known or suspected terrorist" list tries to buy a gun. That's nothing new. But they'd also be notified of attempted purchases by anyone who has been investigated for terrorist links or activities within the past five years. That's new. But what's really new is that the Attorney General could then block the purchase. Could. [The Washington Post’s] Greg Sargent explains:

The crux of the proposal is that it would not automatically result in anyone being denied the right to buy a firearm based on suspicion of terror-related behavior. Rather, it would give the Attorney General the discretion to block a sale to a given individual suspected of involvement of some kind in terrorism.

That's the theory, anyway. In real life, no AG would dare approve a gun sale after being notified of a purchaser's potential terrorist links.

There are plenty of gun-control measures I'd support. Banning high-cap magazines, for one. But banning gun sales to anyone who's ever caught the FBI's attention? No thanks. Senate Democrats have finally put me in the position of agreeing with the NRA. Nice work, folks.

Drum isn’t alone. Even the LA Times noted that government shouldn’t ban people on the no-fly list from buying firearms for similar reasons that Drum details. Moreover, he’s also not one to shy away for criticizing Democrats when they act ridiculous. Besides their latest anti-gun push, Drum criticized liberals (and the Obama administration) last November for mocking Republicans over the security concerns presented to us by Syrian refugees. He described their antics as “absurdly out of touch,” and one that could present problems for the Democratic Party (optics-wise) for making them look soft on national security. This was after the horrific ISIS-led Paris attacks that killed over 100 people.

So, Democrats, pushing a gun control measure that lacks due process of law is a bad idea. In fact, any bill that lacks these protections should be killed. I’m not so sure this is a hill to die on. At the same time, I'm not going to stop you from walking into defeat.