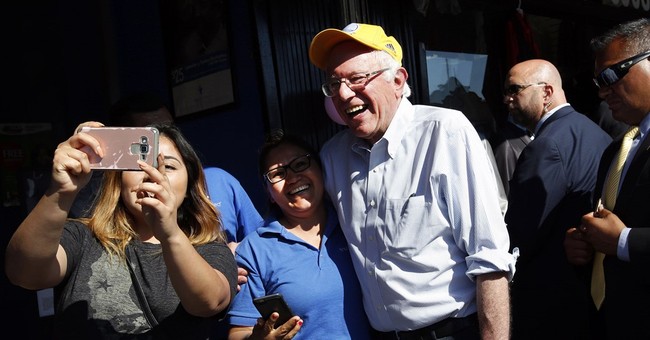 Who is feeding Vermont Sen. Bernie Sanders’ campaign? Who are these people who have managed to spike the blood pressure of the Clinton political machine? For most, the areas in which Sanders’ small donors live won’t surprise anyone. They live in some of the most liberal parts of the country and in zip codes where the proportion of college graduates is high. It’s these people who have fed the self-described Democratic socialist’s army, filling his war chests in the hopes that he can accomplish the political revolution he clamors about on the stump. Many of them are not working, though some are retirees or have decided to leave the workforce to spend more time with their family. But the unemployed are surely in this group feeling the Bern.

The Los Angeles Times was able to analyze these people since the Sander campaign uses ActBlue, a fundraising tool (required by federal law) that discloses donors no matter how small their donation. Lastly, the Times noted that many in Sanders’ army view him as authentic, trustworthy, dependable, and straightforward—characteristics that Hillary Clinton has failed miserably in trying to convey to the masses, especially as her email fiasco gets worse. It also doesn’t help that she refuses to release the transcripts of speeches she made to Wall Street banks, but we digress. Here are the folks who have given Sanders over $200 million in small donations this cycle:

Now, a Times analysis of nearly 7 million individual contributions has provided unprecedented detail about the army of people behind the $27 donations Sanders mentions at virtually every campaign stop.

Many resemble Emily Condit, 40 of Sylmar, who has contributed three times — $5 each — to the Vermont senator’s campaign.

Small-dollar donors such as Condit have allowed Sanders to out-raise his rival, former Secretary of State Hillary Clinton, in the Democratic primary. Clinton had received $190 million through the end of April. (A separate super PAC backing her bid raised an additional $76 million.)

Californians contributed more than $36 million to Sanders’ campaign, the most money from any state in the nation, according to financial disclosure reports that cover fundraising through the end of April, the most recent available. Sanders has raised the majority of his money here in wealthy, coastal areas that are predominately white. Nine of the top 10 ZIP Codes with the highest rate of giving are north of San Jose, with concentrations in the Berkeley Hills and in scenic enclaves north of the Golden Gate Bridge.

The Times combined federal reports from ActBlue and Sanders’ campaign to conduct an unprecedented analysis of Sanders’ contributors, including identifying people who had given multiple times.

This provided a window into the more than 1 million small-dollar contributors who gave nearly two-thirds of his money. These donors are typically invisible because election law only requires campaigns to disclose the identities of people who contribute more than $200.

Sanders donors tend to live in the most liberal parts of the United States — New England, the Pacific Northwest and California — and in the ZIP Codes with a high proportion of college graduates. With the exception of urban areas such as Austin, Texas, and Santa Fe, N.M., he draws far fewer donations in the redder parts of the nation — the South, the Sunbelt and the Midwest.

The Times added that small donors only comprise about 20 percent of her total campaign haul. It’s people power. The same sort of grassroots momentum that catapulted Sen. Ted Cruz and some other Tea Party stalwarts into Congress, albeit for totally different political agendas. But it does undercut the claim that large sums of money automatically equal a political win. Former House Majority Leader Eric Cantor has a huge war chest, and lost badly to primary challenger (and current congressman) David Brat. Clinton will win the Democratic nomination, but she’s going to be bloodied, while Sanders probably never expected to do this well, or get this far, in the primaries. It was a tough slog for her.

In many ways, Sanders already accomplished what he set out to do. Articulate his far left vision for America in the hopes it’ll catch on—he has done that with Democrats who have given him a third of the platform committee seats. It shouldn’t shock us in the slightest if this year’s Democratic platform is one of the most left wing in recent memory. Never underestimate a band of committed and passionate people in politics. At the same time, when these devoted masses see their candidate win a series of primaries against someone from the political establishment, only to see him continually trail said candidate in the delegates count due to perceived party rules (and the superdelegate system), tensions will rise. We saw that at the Nevada Democratic Convention in Las Vegas. It was a trainwreck. Right now, Democrats have to hope and pray that when they head into Philadelphia to officially declare Hillary Clinton the 2016 nominee, riots don’t break out from Sanders supporters. They’re not going away, and neither is he in this primary fight—even in the face of defeat.