Break In The Levee? Study Finds Young Voters Like Democrats, But Are Skeptical Of Big Government Policies 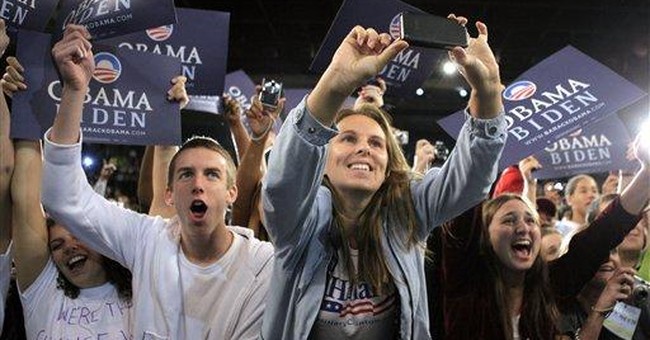 We all know that young voters are more likely to be liberal and vote Democratic. They make up part of the core of Obama’s coalition. But after eight years of President Obama, there appears to be an opportunity for Republicans to make inroads. It’s going to be a long tedious process since Millennials political views rarely make sense. The Atlantic’s Derek Thompson wrote in 2014 about how this voter demographic seems to be lost—literally—based on Pew Research surveys. The most glaring finding is that they overwhelming backed Obama in 2008 and 2012, support universal health care, but are opposed to the Affordable Care Act.

The parties more or less break even on the question of which party cares more about making sure the U.S. is a strong leader in the world, with 47% favoring Democrats and 45% siding with the GOP.

–Republicans have a narrow edge on which party cares more about getting the U.S. debt under control, 49% to 45%.

The best news for Republicans is that these younger Americans seem to favor more market-based approaches to a number of policy issues about which they care the most, according to the survey of 800 18- to 29-year-old adults conducted by YouGov April 19-29:

–On teacher tenure, 73% favored “new approaches in the classroom that can give all students equal access to good teachers,” compared with the 21% who think teachers should be rewarded for their experience.

–Some 63% of these younger Americans favor policies that “encourage bottom-up growth and innovation in communities across the country,” compared with the 32% who think Washington needs “to do more to protect consumers and regulate the banks.”

–Two-thirds of these millennials want health insurance to be “more flexible and customizable…so that patients and doctors can do what makes most sense for them,” while 27% wants “leaders in Washington to set standards for how health insurance should work across the country to ensure everyone gets quality care.”

“Young voters aren’t sure that hard work is what gets you ahead in America anymore, and they think there are serious barriers to opportunity for all,” said Kristen Soltis Anderson, the Republican who conducted this research. “However, these voters aren’t convinced that policy mandates and programs from Washington are the best way to eliminate those barriers.”

[Image Courtesy of The American Federation For Children]

Hard work doesn’t pay off? Just tell that to Kevuntez King of Memphis, Tennessee, who made $200 a week, every week for the past five years to pay for his entire college education. King is a straight-A student, who also participates in a variety of extracurricular activities. He was accepted at Tennessee State University and doesn’t have to take out any student loans.

Still, the GOP may have to go into this messaging war devoid of the social issue angle. We’re Republicans, people already know where we stand on most cultural issues. This social issue agnosticism could allow the GOP to focus solely on education reform, such as school choice and teacher tenure as stated above, which has an added bonus of possibly bringing Hispanic and black voters into the fold. It’s a popular position in these communities, who want their kids to have good educations. Poll after poll, shows that school choice is a popular initiative, one that can drive a wedge into urban Democratic bastions that dot the country.

As for Obamacare, it’s not “more flexible and customizable.” Just looking at Medicaid expansion, a key part of the Affordable Care Act, the Foundation for Government Accountability showed how requests for “flexibility” with Pennsylvania and Iowa’s respective programs were denied by the Obama administration.

The GOP has some work ahead with reaching these voters who seem to like Democrats, but are not too enthralled wit how they execute policy. Republicans will have to look at where they’re viewed as lacking empathy, warranted or not, and avoid straying into the issues that typically turn off young voters. It’s a prolonged targeted engagement that can be successful if Republican can sharpen its messaging skills that have been lackluster to appalling over the past two cycles.

Hit Democrats on how they’re committed to keeping inner city schools in a poor state to keep teachers union bosses happy. There are some Democrats who will ally with us on charter schools and school choice, we shouldn’t shut them out, or view them as an enemy. Show how Obamacare is one giant mandate, how it hasn’t cut costs, how it isn’t flexible, and how more Americans are opting to pay the penalty to remain uninsured because it’s cheaper, which is exactly the opposite of what this law was intended to do. As for jobs and the economy, young voters seem to support entrepreneurism. By far, the best shot for the GOP to make inroads with Millennials, and in the cities, is education.  The Republican State Leadership Committee, the folks who make sure the GOP bench for higher offices will be filled by cultivating leaders from the state and local level, already know the implications of this study. RSLC President Matt Walter said:

“The findings in this report indicate that young voters overwhelmingly support conservative solutions that drive openness, disruption, and create choice—but while our ideas resonate with Millennials, our messaging too often does not. Millennials want viable and compassionate solutions—not simply a message of reassurance. As the leading organization that prioritizes building the Republican bench for generations to come, the findings in this report will be critical in helping our candidates discuss their ideas—ideas that this sector of the American electorate already embrace—in new, fresh, appealing ways.”

There’s a silver lining here. Let’s not waste it.