Yes, Dropping Atomic Bombs On Japan Was A Good Thing 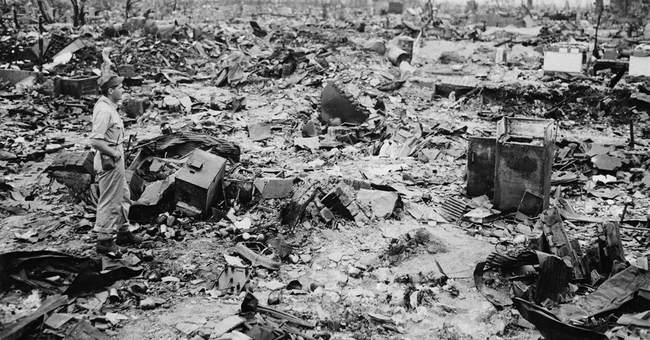 Today, President Obama visited Hiroshima. It was the first time a sitting president has done so. Of course, we’ve entered another arena of liberal debate: were the atomic bombings of Hiroshima and Nagasaki ethical/justified/moral? The answer is yes to all three. First, let’s delve into something a bit disconcerting, which is that an increasing number of Americans feel that the bombing was wrong (via WaPo):

In the first Gallup poll from 1945 just after the bombings, a huge 85 percent of Americans approved the bombings. However, figures from 2005 show a significant decline to 57 percent. Meanwhile, another poll conducted by the Detroit Free Press in the United States and Japan in 1991 found that 63 percent of Americans thought that the bombings were justified in a bid to end the war, while just 29 percent of Japanese did.

This change may have contributed to a generational shift seen in Pew's research: Just 47 percent of Americans 18 to 29 years old said the use of atomic weapons was justified when asked last year, compared to 70 percent of those 65 or older.

We nuked the Japanese, so you can bet that approval for these bombings weren’t going to reach high points. Granted, the majority of Americans still approve of the bombings and think it was justified. For my generation who appears to be confused (and it’s not just this issue), I suggest watching Ken Burns’ The War, or read any history book that deals with the Pacific theater or World War II—specifically the twilight months of the war. The Battle of Okinawa saw the entire 100,000+ Japanese garrison annihilated, with American casualties soaring over 70,000 in 82 days of combat. If the bombs weren’t dropped, total American casualties were expected to be at least 500,000, while the Japanese were projected to be at least a million maybe more.

Just looking at Japan’s southern most home island, Kyushu, the casualty rate alone was estimated to be over 100,000, according to the Joint War Plans Committee (via

On 15 June 1945, the Joint War Plans Committee submitted its draft of the requested paper to the Joint Planning Staff. (24) The paper presented essentially the same case for an invasion of Kyushu that had been made in the earlier debates preceding the operational directive of 25 May. It also incorporated the same forecast of Japanese forces (six combat divisions, two depot divisions, 350,000 men) that had been presented in intelligence estimates going back to mid-1944.

In response to the presidential request for casualty estimates, the Joint War Plans Committee report laid down strong caveats on uncertainty and emphasized that the level of opposition and the time required to complete the operation could result in major variations. The report then offered the following figures as an "educated guess"

The JWPC assessment did not give a specific breakdown for each area individually, but a nominal breakdown can be derived by comparing the component figures given for each scenario. For example, the differences between the second and third scenarios for total casualties and numbers killed are 87,500 and 21,000, respectively. The operational difference between these two scenarios is the inclusion or absence of an attack on the Tokyo Plain. Thus, an interpretation could be made that the estimated casualty total for the attack on the Tokyo Plain was 87,500, including 21,000 killed. Subtracting these figures from the first scenario would yield figures for southern Kyushu of 106,000 total casualties and 19,000 killed, and a similar calculation shows 26,500 total casualties and 6,000 killed for northwestern Kyushu.

Attacking Kyushu would have meant invading an island many times larger than Okinawa; southern Kyushu alone is well over twice Okinawa's size in square miles. Kyushu was initially expected to be garrisoned by Japanese ground combat forces roughly three-and-one-half times the size of the forces on Okinawa. (82) Kyushu also had a civilian augmentation potential many times greater than Okinawa's. The initial estimates by the Joint War Plans Committee and MacArthur's staff of casualties that would be incurred in capturing southern Kyushu (105,000-106,000) were a little more than twice the Okinawa total.

By the first week in August, the estimated total of Japanese Army and naval ground combat troops on Kyushu was more than six times what it had been on Okinawa. Intercepted communications had been showing Japanese preparations to employ the same kinds of suicide attacks and other unconventional tactics and devices that had caused so many casualties in the Okinawa operation. The number of US Army and Marine troops to be committed in the landing was about three times the force that had been launched against Okinawa.

These figures are insanely high, and the Japanese were ready to fight to the death if Operation Downfall went into effect before President Harry Truman decided to use atomic weapons. PBS noted that Kyushu’s invasion plan–codename Olympic–had a casualty rate range of 31,000 for the first 30 days to 280,000 total. This does not include the Coronet phase­–the invasion of the largest island, Honshu, which includes Tokyo, which Truman did not sign off. Given what we know, more people would have been killed, Japanese and American combined, if we hadn’t used nuclear weapons against Japan. It was the right thing to do. It was the moral thing to do. Between the two bombings, 262,020 people were killed. This includes Japanese civilians who were instantly killed by the bombs and the radiation fallout that ensued.

Subtract the very conservative casualty rate (on both sides) of 1.5 million with that of those atomized in August of 1945, and you get 1,237,980. That’s a lot of saved lives—and that figure is probably higher since the Japanese casualty rate would certainly be in the millions. The atomic bombings saved lives and ended mankind’s most destructive war. Prolonging this theater of carnage would be immoral. Losing over 100,000 for an island that was to be used as a staging ground for the main island assault is ridiculously high. By these figures, more people (on both sides) would’ve died on Kyushu and those Japanese vaporized in Nagasaki. Is it because the two bombs were atomic?

If so, that’s a very silly reason. For months prior to the atomic bombings, Americans were bombing whole slates of Japanese cities, destroying at least 25 percent of its urban areas. In some instances, whole cities would be bombed back to the Stone Age. In one night, the United States killed over 100,000 civilians when we firebombed Tokyo in March of 1945. Where’s the outcry over that act, which went into the books as the most destructive air raid in history.

The late former Secretary of Defense Robert McNamara gave a good counterpoint to the atomic bombings when he doled out how much of each Japanese city was destroyed by American airpower in the 2003 documentary The Fog Of War. He was trying to explain how proportionality should be a guideline in war. And that the destruction of the country’s cities through our serial air raids should’ve been taken into account when we dropped the atomic bombs. I still disagree due to the fact that the Japanese weren’t going to surrender, and (again) it would’ve saved millions of lives looking at the total butcher’s bill from the operation.

The atomic bombings weren’t pleasant. In fact, they were horrible. But so would’ve been sending millions of Japanese and hundreds of thousands of American troops into the meat grinder when two bombs ended up being the closing chapter in this brutal fight. Yes, there’s the argument that Truman wanted to scare the Russians. Yes, we sort of lucked out since the Japanese thought we had more atomic bombs—we didn’t. Nevertheless, they surrendered, and countless lives were saved. That’s rather righteous.