No HuffPo, Jesus Christ Was Not Transgendered 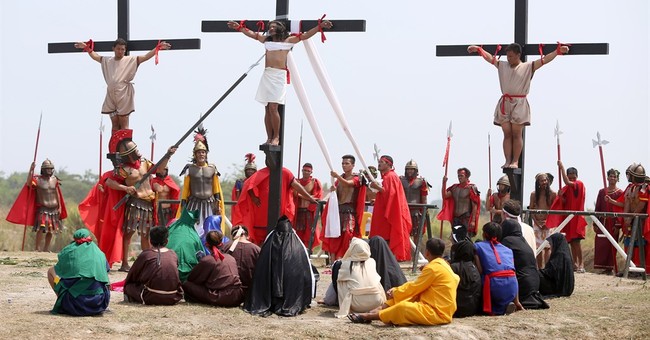 The Huffington Post seems to have become a cesspool of nonsense lately. I don’t mean their reporting—we know it has a left leaning tilt, but that actually is (at times) worth reading. I’m talking about their blogging community, which has veered into insanity land. First, we have a blogger saying that the Second Amendment should be revised, and that self-defense somehow perverts the right to a fair trial:

The main problem with the notion of self-defense is it imposes on justice, for everyone has the right to a fair trial. Therefore, using a firearm to defend oneself is not legal because if the attacker is killed, he or she is devoid of his or her rights.

Now, we have this rather absurd notion that Jesus Christ was transgendered. No, I’m not kidding, folks—someone actually wrote this in response to the latest entrée of debate served to us by the left regarding bathroom laws that they feel unfairly target transgendered Americans:

The worst offenders are the Christian’s who claim to take the Bible literally. Of course they don’t actually do that; they impose their own filters on stories and phrases to fit their particular ideology. If they really did as they claim to do, they would quickly see that Jesus must be, by their own exegetical rules, the first transgender male.

The teaching of the church from ancient days through today is that Jesus received his fleshly self from Mary. The church also teaches that Jesus is the new Adam, born of the new Eve.

Now Eve is a fascinating creature for many reasons. The Bible tells us she is the first example of human cloning, which I touched on in this post. But the fun doesn’t stop there. If we take the Genesis account in it’s literal meaning, as conservative Christians demand that we do, she is also the first case of a transgender woman. God reached into Adam, pulled out a bit of rib bone, and grew Eve from that XY DNA into Adam’s companion. She was created genetically male, and yet trans-formed into woman.

Then along comes Jesus and the whole pattern is both repeated and reversed. The first couple’s refusal to cooperate is turned around by Mary’s yes, and the second act of cloning occurs. The Holy Spirit comes upon the second Eve, and the child takes flesh from her and is born. Born of her flesh. Born with XX chromosome pairing. Born genetically female, and yet trans-formed into man.

A quick look at the dictionary for the prefix “trans” tells us that it means “across,” “beyond,” “through,” and “changing thoroughly,” all of which are great terms for the person of Christ. He cuts across all boundaries. He is beyond our understanding. He is through all and in all. He changes us thoroughly into new creations.

Brandon Morse over at our sister site RedState had a good response to this:

The asininity is astounding, and I’ll clear this up quick. Jesus is NOT trans. As I said before, the universal principles that govern nature – that He set – are pretty absolute. In order for a woman to give birth, she first needs the seed of a male to impregnate her. Hall completely dismisses that the Holy Spirit was that seed in this scenario, and says simply that he “came upon her,” and that an “act of cloning” occurred.

Jesus is not a clone of Mary, just as any child is not a clone of their parent. Christ is the offspring of Mary, and God. While the impregnation wasn’t sexual, the laws of nature were still followed. There was a seed given to Mary who bore Christ in her womb, gave birth, and raised Him as her son. One thing led to another, and the man changed universal law at his Father’s behest.

The best part about the “Jesus is trans” post is that the author seems to place her own filter on biblical interpretation, while criticizing Christians for allegedly doing the same.

I’m not the most religious person, but this seems to be a stretch. There are many ways to argue for and against the recent spat over laws that dictate which bathrooms transgender Americans can use in public—trying to say Jesus was trans is probably not the most effective talking point in this debate.