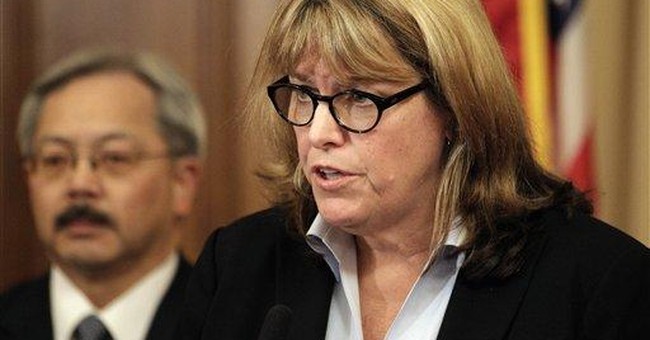 The death of Kate Steinle shocked the nation. It should have been so profound as to lead a chorus of legislators to enact legislation to strengthen our immigration laws, or at least do something to address the numerous sanctuary cities we have in this country. Francisco Sanchez, an illegal alien who had been deported five times before, shot Steinle on a pier in San Francisco in July of 2015. Sanchez picked the California city because he knew authorities would not pursue him. It’s based on a 1989 law that made Frisco a sanctuary city for illegal immigrants, which is trying to be reformed by the city board of supervisors, but no real progress has been made (via Associated Press):

San Francisco officials plan to take another run at clarifying the progressive city's protections for people in the country illegally, a policy that led to national criticism last year when a Mexican man was accused of shooting and killing a woman walking along a waterfront pier.

The Board of Supervisors will consider a proposal Tuesday that says law enforcement can only turn over criminal suspects to federal immigration authorities if they are charged with a violent crime and have been convicted of a violent crime within the last seven years. That would be the only time city workers, including police officers, could disclose immigration status.

But San Francisco's sheriff has resisted the limitation, saying she wants greater discretion over what is a relatively small pool of detainees. The sheriff, as a constitutionally elected official, does not have to follow the board's orders.

The measure's chief sponsor postponed a vote on the ordinance earlier this month, saying that he wanted everyone on the same page. Supervisor John Avalos said the sides have been trying to reach a compromise, but he was prepared to vote Tuesday regardless.

Sheriff Vicki Hennessey has said that the office receives about five requests a week to notify Immigration and Customs Enforcement of a detainee's status. She has not notified ICE in any of those cases, she said.

Hennessey also said that, like her predecessor, she may have ignored ICE's request for notification about Lopez-Sanchez, but at least she would have reviewed his case.

Hennessey’s predecessor, Ross Mirkarimi, said that the city’s sanctuary status made is “safer.” Hennessey beat him in a landslide last November. Still, Democrats’ unwillingness to establish common sense immigration enforcement measures is nothing short of stunning, even in the deep-blue bastion of San Francisco. Even more appalling was the White House response to this horrific event. At the time, they wouldn’t comment. Now, we have a new sheriff that says she would pretty much be like her predecessor on immigration law—action that has left people’s lives shattered. So, yeah, the city might be trying to reform its 1989 law, but it seems to be a clown show.

Steinle’s last words to her father, who was with her on the pier, were “help me, Dad.” Sadly, no one in the city seems to care enough to prevent this from happening to another family.