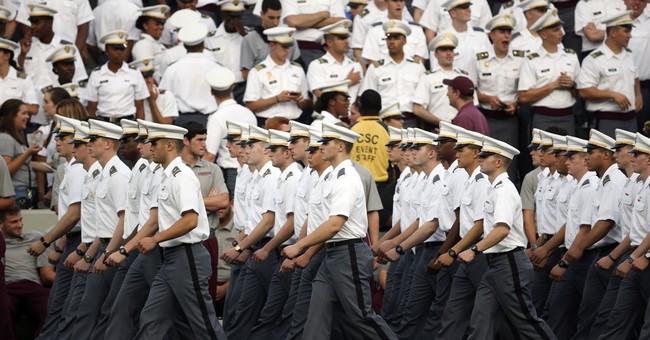 When it comes to our men and women in uniform, the answer is quite clear as to who they want to see in the White House. By a two-to-one margin, our troops favor Donald Trump over Hillary Clinton, according to a Military Times survey:

The results, while not a scientific sampling of military voting patterns (see our methodology below), show strong support for Trump among troops despite critics' attacks that he lacks foreign policy or national security experience.

Independent Vermont Sen. Bernie Sanders fared slightly better than Clinton in a similar head-to-head matchup with Trump, but still trailed the reality TV star and business mogul by a 51 percent to 38 percent margin. About one in 10 military members said they would not vote at all given those two candidates.

Military personnel also demonstrated strong support for Trump in a Military Times reader survey conducted in March. Trump was the most popular candidate among the six presidential candidates remaining then, and the clear choice among Republican service members.

Officers were more likely to back Clinton, though still said they’d vote for Trump by a 46 percent to 32 percent tally. Enlisted respondents broke 58 percent to 21 percent for Trump.

Yet, there are a significant number of servicemen and women who wouldn’t vote for either Trump or Clinton. Around 20 percent of those serving in the Navy, Army, Marine, and Air Force would sit out this election. Comments on the survey noted how weak the field was this year. Other voiced their disgust, while others noted that it's “a lose/lose situation no matter what.”

“They all suck,” wrote another member.

It’s no shocker that Trump and Hillary both have rehabilitation projects of their own. They’re two of the most unpopular people running for the presidency. Trump may do well with male voters, some union households, and the military—but the number of people who are willing to sit it out if he’s battling Clinton is high. He has a lot of time, however, to convince people to join his effort to Make America Great Again.