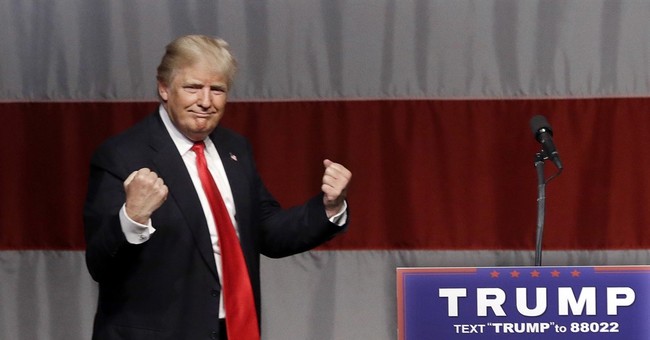 In April, radio host and commentator Hugh Hewitt noted that he doesn’t see how GOP frontrunner Donald Trump could get to 1,237 delegates by the time the Republican Party has their nominating convention in July. Speaking with MSNBC’s Steve Kornacki, Hewitt’s rosy hypothetical gave the billionaire 51 of Indiana’s 57 delegates, but added that he wouldn’t nab any in Nebraska, South Dakota, or Montana. At the time, Trump needed 392 delegates to reach 1,237. Hewitt’s projections after 14 of the remaining 15 contests placed Trump only at 273. That would mean Trump would need to clinch 119 of California’s 172 delegates, which Hewitt said he doesn’t think is possible, unless a “political asteroid” hit the Golden State. Well, from the latest poll, Mr. Trump has a whopping 34-point lead, so that asteroid might be incoming (via the Hill):

Donald Trump leads his GOP presidential rivals by 34 points in California ahead of the state's primary on June 7, according to a poll released Monday.

Trump is at 54 percent support, followed by Texas Sen. Ted Cruz at 20 percent and Ohio Gov. John Kasich at 16 percent, according to the SurveyUSA poll published by ABC7.

All three candidates spoke at the state GOP convention over the weekend, and California is the final major state with delegates needed to secure the GOP nomination up for grabs.

That’s almost insurmountable, though Hewitt said the Cruz team is organized in California, whereas Trump isn’t. Let’s see what happens. According to the RealClearPolitics average, Trump has a 26-point lead.