Anti-Semitic? Former Israeli Foreign Minister Asked Why She Is Smelly At Harvard Event 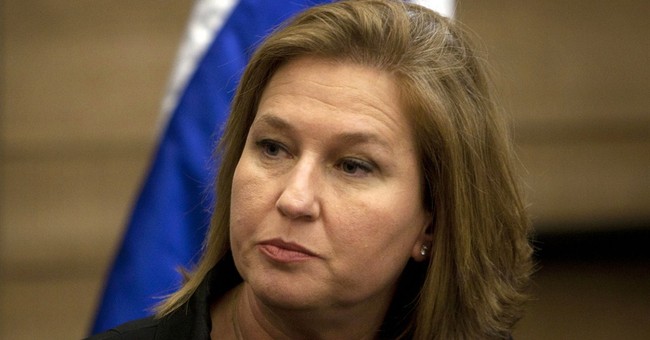 On April 14, Harvard Law School hosted an event, co-sponsored by Jewish Law Students Association and Harvard Hillel, called “The Israeli-Palestinian Conflict & the U.S.: Negotiation Lessons & Possibilities.” It featured a special guest: former Israeli foreign minister Tzipi Livni. According to The Jerusalem Post, it’s part of Harvard’s Program on Negotiation. During the Q&A portion, the program took a rather bizarre turn when an unnamed student asked Livni why she was so “smelly.” The nonsensical line of questioning was viewed as anti-Semitic (“dirty/smelly Jew”), and rightfully condemned by the administration, the student body, and in the Harvard Law Record:

Harking back to the old anti-Semitic trope of the "smelly Jew" was roundly condemned in the Harvard Law Record on Tuesday.

"Anti-Semitism is still very real today, and it just showed itself in our community at Harvard Law School," read the editorial. "The idea that Jews can be identified by a malodor is patently offensive and stereotypes Jews as an 'other' which incites further acts of discrimination."

Yair Rosenberg obtained a transcript of the bizarre exchange and wrote about it in Tablet magazine:

STUDENT: OK, my question is for Tzipi Livni, um, how is it that you are so smelly?

STUDENT: Oh, it’s regarding your odor.

MODERATOR: I’m not sure I understand the question.

Sahand Moarefy, president of the school’s Middle East Law Students Association, said, “I unequivocally and unwaveringly condemn the recent anti-Semitic remarks at Thursday’s event on the Israeli-Palestinian Conflict. As the president of an organization dedicated to representing and serving students across the Middle East, including Israel, I deplore any attack on individuals based on their race, religion, or cultural heritage.”

Rosenberg added that Harvard Law dean Martha Minow not only said that the comment was offensive, but embarrassed the institution:

It was an embarrassment to this institution and an assault upon the values we seek to uphold. The fact that speech is and should be free does not mean that hateful remarks should go unacknowledged or unanswered in a community dedicated to thoughtful discussion of complex issues and questions.

The student in question eventually released this apology:

“I am writing to apologize, as sincerely as I can via this limited form of communication, to anyone who may have felt offended by the comments I made last week. To be very clear, as there seems to be some confusion, I would never, ever, ever call anyone, under any circumstances, a “smelly Jew”. Such a comment is utterly repugnant, and I am absolutely horrified that some readers have been led to believe that I would ever say such a thing. With regards to what I actually did say, I can see now, after speaking with the authors of this article and many other members of the Jewish community at HLS, how my words could have been interpreted as a reference to an anti-Semitic stereotype, one that I was entirely unaware of prior to the publication of this article. I want to be very clear that it was never my intention to invoke a hateful stereotype, but I recognize now that, regardless of my intention, words have power, and it troubles me deeply to know that I have caused some members of the Jewish community such pain with my words. To those people I say, please reach out. Give me an opportunity to make it right. I will assure you, as I have already assured many, that had I known it was even possible that some listeners might interpret my comments as anti-Semitic, there is absolutely no chance that I would have uttered them. I trust that those that know me and have engaged with me on a personal level will not find this at all difficult to believe. Many members of the Jewish community—some of whom hold strong differences of opinion with me—have reached out to me on their own to let me know that they did not interpret my words as anti-Semitic, because they know me well enough to know that that is not at all consistent with who I am as a person. I want to thank them and any others who have given me the benefit of the doubt, and I am writing this note in the hopes that more of you will do the same. I say this, however, fully cognizant of the fact that no amount of writing can serve as a substitute for genuine human interaction. So please, if there remains any doubt at all, do take me up on my offer above and reach out so that I can make this right to you on a more personal level.”

So, you would never call someone a “smelly Jew,” but you would ask why a Jewish person is smelly–as evidenced by this rather embarrassing episode. How did this person get into Harvard Law? And good for this person that his equally idiotic colleagues, who also happen to be Jewish, reached out to say they weren’t offended. The question was either anti-Semitic or abjectly stupid. There’s no chance of coming out clean on this–no Andy Dufresne moment to be had. This whole fiasco is just a disgrace. At my alma mater, Dickinson College, former CIA agent Valerie Plame came to speak about her days in the intelligence community. She spoke about briefly about her early life and her training at the “farm” etc., but one of the questions during the Q&A came from an older man who asked why a woman as beautiful as her ended up with former Ambassador Joseph Wilson. It was cringe-worthy, just like calling a high-ranking Israeli official smelly to her face.