Bernie Sanders' Income Is Less Than One Of Clinton's Paid Speeches 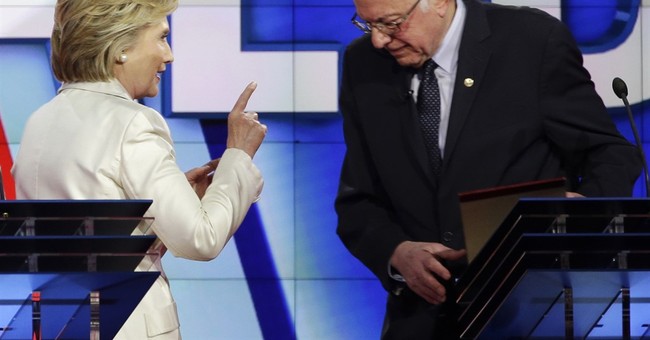 We all knew the Clintons were rolling it–I’m talking about money of course. Yes, they’re also rolling in a bunch of lies, especially when it comes to the former first lady’s completely avoidable email fiasco and Benghazi. Nevertheless, if there’s a stark difference between Clinton and her Democratic opponent, Vermont Sen. Bernie Sanders, it’s their tax returns. Sanders’ entire income for the year amounted to less than one of those luxurious paid speeches Clinton is asked to deliver at various companies and banking institutions (via Weekly Standard):

Bernie Sanders reportedly earned just over $200,000 in 2014. That same year, Hillary Clinton, Sanders's top Democratic rival, gave about 45 paid speeches, many of which paid her more in a single hour than Sanders made the entire year.

The Washington Post reports on Sanders's income. "The senator from Vermont reported income of just more than $200,000 on his 2014 returns, according to the first few pages of his federal and Vermont filings, which were shared with The Washington Post back in June. On Friday, the couple is planning to release the rest of the returns, including attached schedules," writes the paper. "The vast majority of the couple's income came from Sanders's $174,000 Senate salary and Social Security benefits that both he and his wife, Jane, a former college president, receive."

As CNN reported at the beginning of this year, "Hillary Clinton and her husband, former President Bill Clinton, combined to earn more than $153 million in paid speeches from 2001 until Hillary Clinton launched her presidential campaign last spring, a CNN analysis shows.

Again, this isn’t shocking as we all expected the Clintons to heavily outearn the disheveled democratic socialist. At the same time, this will only bolster Sanders’ supporters by reinforcing what many Democrats, who are part of the left wing of the party, already think about Clinton: she’s egregiously inauthentic. For a woman who hasn’t really lived a normal life since Bill was elected Governor of Arkansas for most of the 1980s, which only ended when he was elected president in 1992–they have a point. Moreover, can Hillary truly know what it’s like for America’s working class when she, and Bill, make in one speech what most Americans earn in their entire lifetimes? No, they don’t. To make matter worse, Cortney noted that Hillary joined a Verizon worker picket line after she had accepted $225,000 from the telecommunications company? Over 30,000 Verizon workers went on strike this week–the largest in decades. This stunt looks shamelessly opportunistic and unnatural from Clinton, further accentuating her authenticity problem with the Democratic base. Yet, to give the former Secretary of State a little cover, this is a political development on the campaign trail–she had to do something. Sadly, it was more of a Catch-22 situation.

On the other hand, let’s not let Sanders off the hook. Yes, young liberals may love him. Yes, he kills Clinton on trust and honesty regarding character traits. Yes, he says everything the far left of the party (which is growing in influence) wants to hear this cycle. But he doesn’t know how to achieve it. We saw this explicitly during Sanders’ disastrous editorial meeting with The New York Daily News editorial board. The man simply doesn’t know how to achieve any of the goals he has laid out before voters. So, Sanders is Mr. Humble regarding wealth, and Mr. Authentic compared to Mrs. Clinton, but he has no clue what the hell he’s talking about. His vision for the country lacks an action plan, which is why both candidates are awful. Then again, the Republican side isn’t much better.