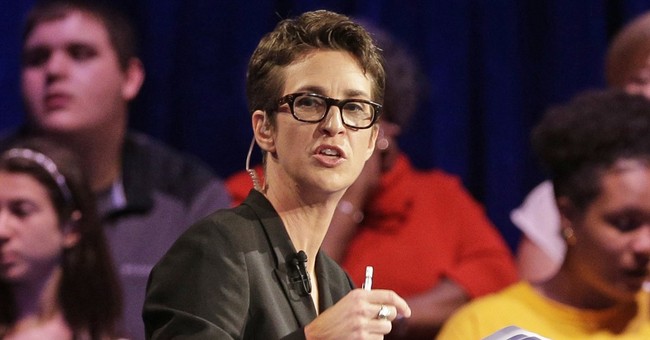 In 2008, MSNBC host pressed then-Sen. Barack Obama that he had an opening to say that conservatism has been bad for the country in response to attacks from Sen. John McCain and the GOP, and that they’ve been on the wrong side of the debate on key issues throughout our country’s history, like the creation of Social Security and the Civil Rights movement. Obama famously laughed off the notion; saying that he knew Maddow had been “crushing for a bruising” with this narrative. He added (at the time) that he was winning, so “he must be doing something right” without explicitly going after the GOP. He also mentioned that he wanted to build a working majority for change, which wasn’t possible with just members of his party. Flash-forward to today, and the Obama agenda is a disaster.

Now, as 2016 heats up, Maddow had two interviews with Sen. Bernie Sanders and Hillary Clinton, where she asked about the future of the Republican Party–and whether the two Democratic candidates are saying “good riddance,” let the GOP blow up and come back as something better.

Clinton said she does favor a strong two party system, and that there had been points in time where the GOP was stronger and more unified. At the same time, there have been periods were the Democrats were in a better political position. She did note that there is a lot of turmoil among the Republican base, their elected officials, and their party leaders, but they need to sort that out.

She also said that the three remaining candidates running, Donald Trump, Sen. Ted Cruz, and Ohio Gov. John Kasich, are closer concerning ideology than what is depicted on the campaign trail. This is mainly due to the fact that the GOP race is grounded in attitude rather than policy, and Trump’s colorful persona surely has upset the applecart on that front.

Clinton did emphatically note that she would do her best to make sure that we do not go back to the trickle down economic policies of the past, which she described as snake oil. She added that the GOP is peddling the same failed policies for the last 30 to 40 years, adding that whoever emerges as the Republican nominee is going to be on the wrong side of what this country needs to do. In the meantime, while the GOP fights each other; she’ll be discussing how she will fix the country.

Sanders said that the state of the Republican race was an embarrassment and a circus, as the GOP has sunk to attacking each other’s wives, while we have so many issues to tackle as a country. He also said that he doesn’t believe that a large portion of the GOP is going to bolt from Trump; he feels they’ll come together after the convention.

He added that the GOP has moved very far to the right. They’re way out of touch with where the American people are on the issues, noting that if the media looked at what they stand for–instead of what Trump says on the stump–you’ll see a party that supports cuts to Social Security/Medicare, denies the existence of climate change, doesn’t stand with women on pay equity, and is in communion with a corrupt campaign finance system. He called the current GOP a “fringe party” that would get only five to ten percent of the vote. I’m not so sure about that, and the notion of Sanders, a self-described Democratic socialist, calling other people fringe is deliciously ironic. Nevertheless, Sanders did say that we should have a fiscally conservative party as well, though he added that he won’t give any ideas on how the GOP should re-organize their party.

Sanders also said that it’s absolutely imperative that we make sure a Republican doesn’t succeed Obama this year. So, in a way, both Sanders and Clinton acknowledge somewhat that we need two different parties, but that the GOP primary is a circus, fraught with turmoil. For now, the Republican Party is doing a fine job beating each other up without any assistance from the liberal media or the Democratic Party.