Trump: Gee, I Hope I’m Not Creating An Atmosphere Of Violence At My Rallies 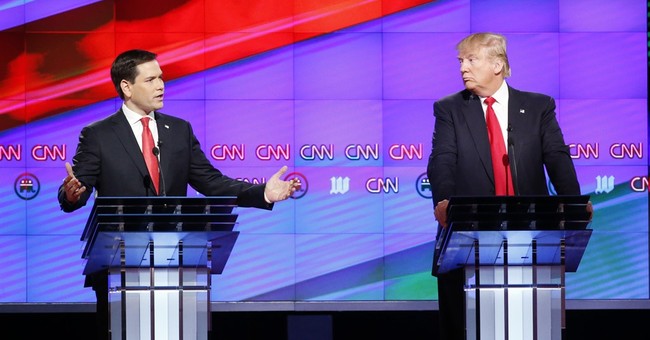 CNN’s Jake Tapper touched upon the instances of violence that seem to follow the billionaire magnate around during his campaign trips. Recently, a protestor sucker punched a protestor in the face at a Trump rally in North Carolina; the Trump supporter was later charged with assault. Then, in terms of the media, Trump campaign manager Corey Lewandowski reportedly assaulted Breitbart reporter Michelle Fields after a presser on Tuesday; that incident (which also happens to touch upon First Amendment freedoms) wasn’t mentioned tonight.

Yet, Trump’s answer was waffled. He said that these rallies have attracted tens of thousands of people; they have passion. They love their country, and they’re angry over bad trade deals, tax increases, and the loss of their jobs. Trump also said that he hopes that he’s not contributing to the alleged atmosphere of violence.

Tapper then listed what’s he’s said at pas rallies, including one on February 1, where he said of a protestor that that he should have the “crap” knocked out of him;

Feb. 23, “I like to punch him in the face,” speaking of a protestor; and Feb. 27, “in the good ole’ days they would have ripped him out of that seat so fast.” Some loud cheers emanated from the crowd.

Trump responded by saying that we have some protestors that are just “bad dudes.” They’re swinging; they’re hurting people; and they’re dangerous. And if they got to be taken out, something needs to be set in place, which is where he cited the municipal government and the police who handle the removal. Trump then pivoted towards lauding law enforcement for their efforts to keep Americans safe.

Trump: Gosh, I sure hope I haven't encouraged violence!

Tapper: Here are your quotes doing exactly that.

Trump: Those protesters were bad!

Donald Trump last month at his rally: ‘Knock the Crap Out’ of Protesters https://t.co/QiAgjezKcO pic.twitter.com/tcxOtyMfVz

GOP Rep. Makes a Prediction About Biden's Presidency
Townhall
Richard Grenell notes that Rep. Eric Swalwell is already spinning 'another right-wing/Fox News conspiracy' that's headed our way
Twitchy
Congressman Reveals What He Said and Did to Officer Who Shot Ashli Babbitt
Redstate
The Morning Briefing: It's a Good Time to Purge the 'Pelosi Republicans'
PJ Media