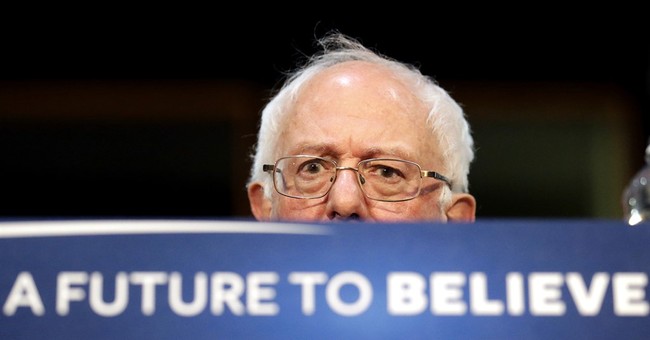 Yes, Sen. Bernie Sanders may have outright trounced Clinton (67/32) in the Kansas Democratic Caucuses, but let’s this be a friendly reminder to everyone that his economic agenda might as well be a suicide note for America. The self-described Democratic socialist has made no effort to hide that fact that he wants to tackle inequality, a corrupt campaign finance system, and provide health care for all. He has admitted that taxes for everyone would go up if he were to be elected president, but he hasn’t really mentioned how much. Maybe that’s because that figure soars into the trillions of dollars (via

Democratic presidential candidate Bernie Sanders has proposed $15.3 trillion in tax increases, according to a new report, and would raise rates on virtually everyone, including the politically all-important middle class.

Not surprisingly for a candidate who has made income inequality his central issue, Sanders’s plan would wallop the rich, an analysis released Friday by the Tax Policy Center shows.

But Sanders, going where few politicians dare, would also raise taxes on middle- and low-income families, with those in the dead center of the income spectrum facing a $4,700 tax increase. That would reduce their after-tax incomes by 8.5 percent, the report said.

The report underscores the stark choice facing Democratic primary voters when it comes to tax policy.

Rival Hillary Clinton has proposed a number of tax increases as well, but she has targeted the wealthy and on businesses, and plans a tax cut for those further down the income ladder.

“There is a very, very clear choice,” said Len Burman, head of the non-partisan Tax Policy Center. “They really couldn’t be more different.”

Sanders wants tax hikes to pay for a raft of new government benefits, including health care for everyone, free college tuition, paid family and medical leave, and increased infrastructure spending.

There is a risk that Sanders’s tax increases won’t be enough to cover all the additional spending, worsening the government’s already dire long-term budget outlook, the TPC said, though it didn’t examine that question in detail.

Oh, and there was a study done on the impact of his health care plan. It would be a nightmare for the working poor. Alas, a common theme of socialism: it looks great on paper, but it’s ultimately a total disaster.