Kasich: I'm Not Going To Be Anyone's VP Pick 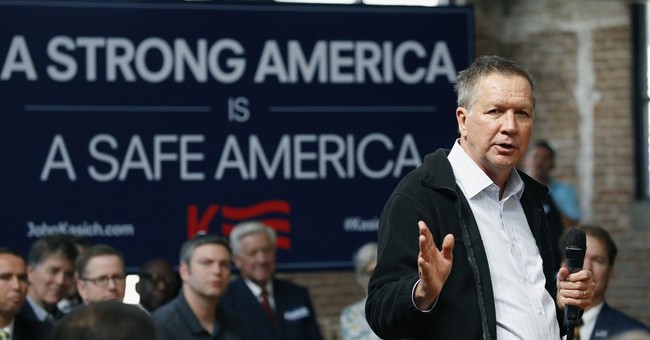 Ohio Gov. John Kasich isn’t going to be anyone’s vice president pick. Yesterday he ruled that out quite forcefully on Stuart Varney’s show on Fox Business, but didn’t rule out endorsing Donald Trump if he were to clinch the Republican nomination:

“There is zero chance I will be anybody’s Vice Presidential candidate, period, end of story,” Kasich said.

When asked whether he would endorse Trump if he were the nominee he said, “If Donald Trump were to somehow endorse David Duke, of course I wouldn’t endorse him. Let’s see where this thing goes and let’s see what happens between now and then. I don’t like to get into speculation. The people who are in the arena I have a lot of respect for.”

He also commented on the war of words between Trump, Cruz and Rubio and restoring unity within the Republican Party.

Prior to the New Hampshire primary, where Kasich came in second, the governor also ruled out being someone’s second choice, saying he would be a terrible vice president because he’s his “own man,” he told CNN’s Gloria Borger. "I don’t take orders from these people; it’s not what I do; it’s not who I am,” he added.

Kasich’s disinterest in the VP spot dates back as far as October of 2015. He reiterated his position after the South Carolina results as well. So, Kasich is in it to win it. Overall, he’s pretty much done, except for Ohio–a state that anti-Trump voters need for him to actually win since a) he’s does best there against Trump and b) if he wins, he could block the necessary delegates Trump needs to clinch the nomination.