WaPo: Maryland Democrats Need To Get A Grip, Might Have 'Hogan Derangement Syndrome' 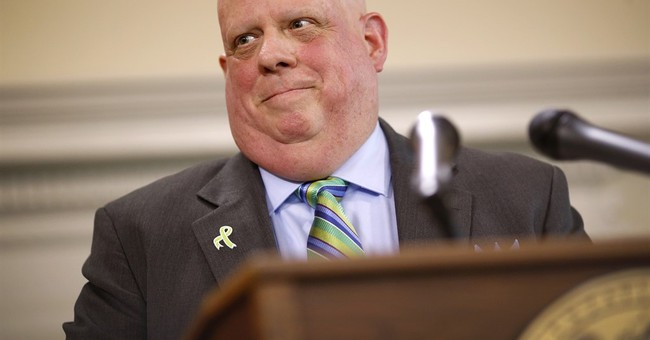 Maryland Republican Gov. Larry Hogan has beaten cancer, has phenomenal approval ratings, and has pretty much everyone liking him–both Democrat and Republican. The man knows how to get things done, and has promised to tackle the issues he campaigned on in the 2015 gubernatorial election. Yet, last week, some Maryland Democrats lobbed a rather nasty accusation against the governor concerning the building of a new jail, and other projects, that they consider to be–you guessed it–racially motivated. Even the Washington Post’s editorial board was a bit taken aback by the line of attack, saying the Maryland’s Democrats have “Hogan Derangement Syndrome”:

The latest eruption of the Democrats’ Hogan Derangement Syndrome occurred last week, when African American legislators accused him of racially motivated “assaults” on black communities. The so-called evidence included the governor’s decisions, last year, to kill a light-rail line, trim extra education funding and fund a new jail in Baltimore, while initially withholding funds for a new hospital in Prince George’s County. Both Baltimore City and Prince George’s are majority-black.

We didn’t support Mr. Hogan in his 2014 campaign. Nonetheless, what has been striking since he took office is neither his ideology (faint), nor his agenda (small-ball), nor his governing style (laid-back), nor his partisanship (run-of-the-mill) but the disproportionate attacks by Democrats on a governor whose record so far qualifies him as a moderate.

Last year they pilloried him for trying to divert money for the state’s underfunded pension system, a cause Democrats themselves embraced just four years earlier, before legislative amnesia set in. This year they derided his anodyne State of the State address, heavy on pledges to work collaboratively with Democrats, with initiatives — some targeted tax cuts and fee reductions; nonpartisan redistricting; efforts to combat heroin addiction — that could easily have been issued by a reform-minded Democrat.

Democrats responded with bills that would tilt the balance of power away from the governor and toward the Democrat-controlled legislature. Some of those measures, such as subjecting the state’s school superintendent to legislative approval, looked gratuitously political; amid criticism, it was essentially withdrawn Tuesday.

Before Mr. Hogan took office, Maryland was a virtual one-party state, led by a Republican governor for just four of the preceding 45 years. Now Democrats, encumbered by a sense of entitlement and baffled by a middle-of-the-road GOP governor, seem bereft of a strategy and grasping for an agenda. They would need both to wrest power from Mr. Hogan if, as expected, he seeks reelection in 2018.

Now, for a hard core conservative, you probably would be disappointed, as the Post notes, that he hasn’t done much to roll back much of Gov. Martin O’Malley’s previous legislative initiatives, but that’s the reality of being a chief executive in a deep-blue state. At the same time, these petty political games from Democrats are the epitome of weak sauce.