Larry Hogan Still Riding High In Maryland, Even With Democrats 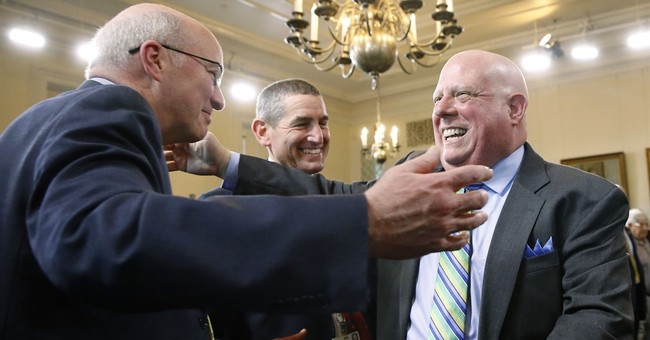 We all knew Republican Maryland Gov. Larry Hogan had a lot on his plate. Personally, he was diagnosed with non-Hodgkin’s lymphoma in June. Politically, he was a Republican governor in a deep-blue state with an overwhelmingly Democratic legislature. Yet, somehow, he’s managed to draw praise from across the political spectrum in a new Baltimore Sun/University of Baltimore poll, where Marylanders also feel that their state is finally heading in the right direction. A far cry from the numbers seen during the O’Malley administration:

Less than a year into his term, Hogan's approval rating among likely voters has soared to 63 percent and exceeds that of Sen. Barbara A. Mikulski, typically the state's most popular politician, the poll found. She is supported by 61 percent of voters.

The governor's popularity is coupled to a dramatic swing in optimism about Maryland's future.

A majority of likely voters — 57 percent — now believe the state is moving in the right direction. It marks what pollster Steve Raabe calls an "enormous" swing in attitudes from the final months of former Gov. Martin O'Malley's tenure, when only 44 percent felt that way.

"You almost never see that sort of shift," said Raabe, president of Annapolis-based OpinionWorks, which conducted the poll. "Everybody, regardless of political stripe, feels like we're moving in the right direction."

His populist moves, such as lowering tolls on the Bay Bridge, and his relative newness in office have contributed to high approval ratings, Raabe said. Hogan is enjoying "an extended honeymoon," Raabe said, especially among Democrats in state where they outnumber Republicans more than 2-1.

"I'm a strong, dyed-in-the-wool Democrat. And I approve," said Larry Regan, a 61-year-old lawyer from Rockville. "Hogan appears to be taking action. … I like his work on tolls. Boom. Doing something."

Gov. Hogan was recently declared cancer-free. And his approval rating seems to be holding steady from his October numbers, where the Washington Post noted that he enjoyed a 61 percent approval rating in October; a huge jump from his 42 percent rating in February.

Keep up the good work, governor.

Poll: Trump leads all Democrats in Wisconsin -- and trails all in Michigan and Pennsylvania
Hotair
Bernie Bros Very Unhappy After Inconvenient 2019 Article on Sanders' Wealth and Three Homes Resurfaces
Redstate