Can Sanders Bern Through Clinton’s Firewall To Clinch The Democratic Nomination? 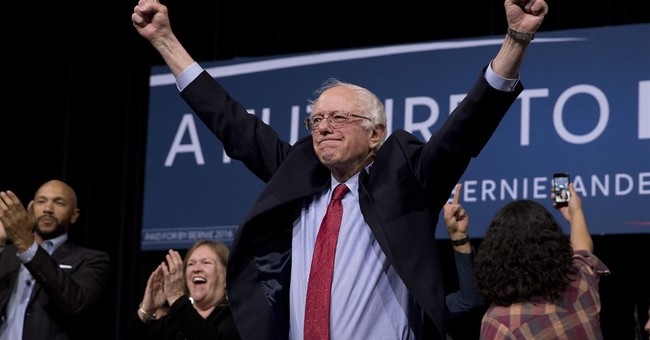 If you look at the exits for the Democratic Nevada Caucuses, the theme of the old guard fighting off a new order insurgency were again revealed in the age groups, Clinton was able to not look like Mrs. money bags winning most of the income demographics, and Sanders took the Hispanic vote. Or did he? Nate Cohn at The New York Times’ Upshot blog noted that the numbers showing Sanders’s winning the Hispanic vote is shoddy for a number of reasons, one of them being how could Clinton lose that voter bloc when she won heavily Latino areas of the state:

…[T]here are a lot of reasons to question the findings from the polls. They have a small sample of precincts and voters, and they simply were not devised to provide precise estimates of the Hispanic vote.

The actual election returns in Las Vegas’s Clark County hint at a different story. Analyzed neighborhood by neighborhood, they suggest that Mrs. Clinton might have won the Hispanic vote by a comfortable margin. She won about 60 percent of delegates in heavily Hispanic areas, a result that calls the finding of the polling into question.

In the 76 precincts in Clark County where we believe that a plurality of registered Democrats are Hispanic, Mrs. Clinton defeated Mr. Sanders in the delegate count by a margin of 58 percent to 42 percent. In the smaller number of majority Hispanic precincts, she seemed to win about 60 percent of the delegates, and she won perhaps 65 percent of the delegates in the precincts where Hispanics appeared to be a particularly large share of registered Democrats.

There’s another problem: There were relatively few homogeneous precincts, where almost all of the voters are Hispanic. Even the majority Hispanic precincts in Nevada have large numbers of non-Hispanic voters, who themselves could have been likelier to support Mrs. Clinton (though the findings still hold if one excludes the precincts where there appear to be an above-average number of black voters, who favored Mrs. Clinton by a wide margin).

Cohn also noted how the entrance/exit polls aren’t primed to gauge Hispanic voters well, noting CBS News’ survey had over 1,000 respondents, but only 213 were Latino. So, Clinton garnered a win, it wasn’t resounding, but it was something she desperately needed after being trounced in New Hampshire (though she did end up leaving the primary with more delegates than Sanders thanks to superdelegates).

So, is this where the end of the Sanders campaign begins? Nate Silver of FiveThirtyEight mentioned prior to Iowa that the disheveled self-described democratic socialist could win Iowa and New Hampshire, but lose everything else once the primaries begin to have more diverse electorates. As the Sanders and Clinton legions prepare to do battle across the country on Super Tuesday, especially in the South, we’re talking about Black Democratic voters who don’t seem ready to leave Hillary en masse. In Nevada, 76 percent of Black Democrats backed Clinton. This comes after Team Bernie made a hard push for Black voters. Nevada also had a more liberal electorate for this year’s Democratic caucuses–and Sanders still lost:

According to the entrance poll in Nevada, Clinton won black voters 76 percent to 22 percent. To put that in context, Clinton’s margin is only slightly smaller than Barack Obama’s 83 percent to 14 percent win with black voters in the 2008 Nevada caucuses. While the result wasn’t unexpected given that pre-election polls showed Clinton dominant with black voters, Sanders spent a lot of money on television in the state. That Sanders couldn’t close the gap with black voters with a big advertising push is a very ominous sign for his campaign.

As Democrats hold their own Palmetto rumble tomorrow, we shouldn’t be shocked if they overwhelmingly stay with her. They’re also a huge part of the electorate, comprising 55 percent of Democratic voters in 2008. If Sanders can’t start seriously siphon these voters away from Clinton in South Carolina, there isn’t much hope he will have much success in other southern states. Nate Silver has compiled the primaries and caucuses that Sanders needs to win in order to secure the nomination, which again is still a long shot. Nevertheless, there’s an avenue for Sanders, who still has energy and a nice fundraising operation going for him to keep him afloat [emphasis mine]:

On the left-hand side of the chart, you’ll find a projection for how each state might go if recent national polls are right, with Clinton ahead of Sanders by about 12 percentage points nationally. The right-hand side is more crucial: It shows how the states might line up if the vote were split 50-50 nationally. Since the Democrats’ delegate allocation is highly proportional to the vote in each state, that means Sanders will be on track to win the nomination if he consistently beats these 50-50 benchmarks. Conversely, Clinton will very probably win the nomination if Sanders fails to do so, especially since superdelegates would likely tip a nearly tied race toward Clinton.

Super Tuesday (March 1). Clinton is likely to compile lots of delegates from the seven Southern states that vote on Super Tuesday, although Oklahoma — which is quasi-Midwestern and relatively white — might be Sanders’s best shot at an upset. Sanders should win Vermont by a huge margin, meanwhile. That leaves the Minnesota caucus, Colorado caucus and Massachusetts primary as the races to watch; they’re the sorts of states Sanders absolutely needs to win to have a shot at taking the nomination.

Big-state primaries on March 8 and March 15. This is probably the most important eight-day stretch on the Democratic calendar. Michigan votes on March 8 (as does Mississippi), followed by Florida, Ohio, Illinois, North Carolina and Missouri on March 15. Together, these states will put 857 pledged delegates at stake, or more than 20 percent of the Democrats’ pledged total. (Pledged delegates, chosen by voters, are distinct from superdelegates.) Based on current polling, most of these states favor Clinton either narrowly or substantially, so Sanders will have to make up ground, perhaps enough to win a couple of them outright.

Favorable terrain for Sanders in late March. A series of Western states vote between March 22 and April 9, as does Wisconsin. Almost all of them figure to be favorable to Sanders — including Wisconsin, where he was already almost tied with Clinton in the polls before his New Hampshire win. A possible exception is Arizona, where Clinton beat Barack Obama in 2008 and where the electorate can be tricky to predict.

Silver adds that Sanders would probably need to win two of the three of the last big primaries for Democrats–New York, California, and Pennsylvania–though that’s assuming that all goes well for the Sanders campaign with little to no setbacks starting Super Tuesday. He adds that California could be an interesting contest, given that the state’s left wing tilt should help a Sanders candidacy, but the diverse electorate would probably benefit Hillary. If the contest is close* (hypothetically), those banking on winning in November, which is where Hillary dominate Sanders in exit polling, could be enough to sway Democrats who may like Sanders’ politics, but do not want to see a Trump or a Rubio become the next president of the United States.

Yet, if the ghosts of 2008 come back to haunt Hillary, where she ran a lackluster campaign and lost to then-Sen. Obama, that electability point may not even matter, possibly leaving Democrats with a “if we’re going down, might as well do it with a bona fide progressive.” That person being Bernie Sanders, but I doubt it will come to that, especially with superdelegates giving her some much needed support on the flanks.

*Silver noted on Saturday that even with a Nevada loss, Sanders could