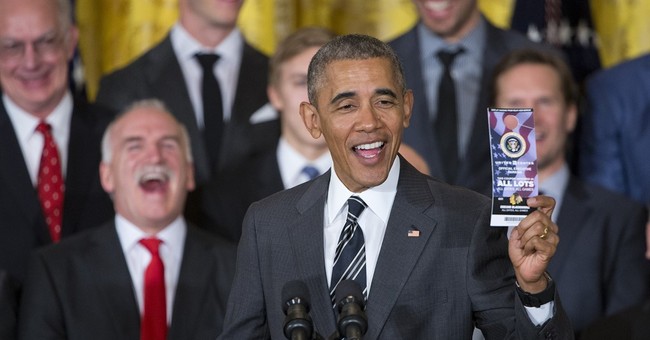 The White House has a very important announcement about the upcoming political battle over filling the vacancy on the Supreme Court left by Justice Antonin Scalia: President Obama regrets filibustering Samuel Alito when he was in the Senate. This is probably due to video of him pretty much doing a 180-degree turn on judicial nominations. In 2006, then-Sen. Obama said that he disagreed with the premise that a president’s nomination to the Supreme Court (or any federal court) should be confirmed just because he won an election. Ten years later, he says that blocking judicial nominations isn’t how our system of government is supposed to work.

Jonathan Tobin wrote in Commentary that this is the height of hypocrisy, along with lamenting how judicial nominations used to be turned down for legitimate reasons, not because they thought the wrong way. The GOP isn't totally innocent regarding playing politics with nominees, but I'll get to that in a bit:

…[I]t takes a special kind of hypocrite to use the bully pulpit of the presidency to excoriate Republicans for not wanting to let a conservative icon like Antonin Scalia to be replaced by an Obama-style liberal and to do so on the basis of fair play. Senator Obama didn’t believe in fair play for conservatives even in, as was the case with Alito’s nomination, they might be replacing another conservative (which in that case was Justice Sandra Day O’Connor) rather than changing the ideological balance of the court as an Obama pick would do. Nor was Obama shy about letting us know that he expected to nominate yet another hard line liberal to the court like his two previous choices Justices Sonia Sotomayor and Elena Kagan.

Once upon a time, Supreme Court nominees were evaluated by the Senate on the basis of the sort of criteria that the president spoke about in his presser. The only reasons judges used to be rejected were ethical lapses (Lyndon Johnson nominee Abe Fortas) or if they were plainly unqualified or holders of racist views (Rich Nixon nominee G. Harold Carswell). But as I noted earlier this week, the boat sailed on that standard in 1987 when the Democrats invented a verb in the course of demonizing the highly qualified Robert Bork because he was too conservative for their tastes. It might be nice to be able to return to the pre-Bork days but in a time of increased partisan and ideological division, that is one genie that can’t be stuffed back into the bottle.

But it certainly cannot be done by a president who thinks it was okay to filibuster a qualified conservative because he was appointed by Bush but believes it is wrong to do the same thing to any liberal that he taps for the high court.

Yet, President Obama acknowledged this vote on Alito at the US-ASEAN press conference held at the Annenberg Retreat at Sunnylands in Rancho Mirage, California on Tuesday:

JEFF MASON, REUTERS: And lastly, as long as we’re doing this in a row, how do you respond to Republican criticism that your position is undercut by the fact that you and other members of your administration who were in the Senate at the time tried to filibuster Judge Alito in 2006?

PRESIDENT BARACK OBAMA: Look, I think what’s fair to say is that how judicial nominations have evolved over time is not historically the fault of any single party. This has become just one more extension of politics. And there are times where folks are in the Senate and they’re thinking, as I just described, primarily about, is this going to cause me problems in a primary? Is this going to cause me problems with supporters of mine? And so people take strategic decisions. I understand that.

When video showing President Obama’s Alito remarks began surfacing, White House Press Secretary Josh Earnest added that the president regretted casting that vote in lieu of Senate Democrats making their case to American people that Samuel Alito was unfit to serve on the Supreme Court. Again, we have some Monday morning quarterback at play akin to what Sen. Chuck Schumer has gone on to say about his 2007 declaration to block Bush-appointed Supreme Court nominations. He said that he would have entertained a hypothetical Bush nomination, which no one should believe. This is pure damage control–nothing more (via USA Today):

The Alito nomination has become one of many historical footnotes that have taken on new relevance as Obama and the Republican-controlled Senate jockey for high ground in their battle over the election-year Supreme Court nomination. White House Press Secretary Josh Earnest called Obama's decision to join in the filibuster of Alito in 2006 a "symbolic vote" based on specific objections to Alito's rulings as a lower court judge.

At the time, Obama told ABC News that he supported the filibuster "because I think Judge Alito, in fact, is somebody who is contrary to core American values, not just liberal values." Obama said the court needed to "provide some check on the executive branch, and he has not shown himself willing to do that repeatedly."

But during his nomination of Sonia Sotomayor in 2009, now-President Obama already appeared to have misgivings, saying "last-minute efforts using procedural maneuvers inside the Beltway, I think, has been the wrong way of going about it."

I mentioned in a previous post that both sides are at fault for the politicization of the nomination process, BUT it’s hardly accurate to say that an eight-member court will lead to the collapse of the United States. We’ve had one before, and we survived. As Guy noted yesterday, there’s been a vacancy on the New Jersey Supreme Court for six years, with Republican Gov. Chris Christie unable to sway the Democratic–controlled state legislature to confirm his nominees. The Garden State may be awful for business, property taxes, and overall government (they have good diners!), but Jersey isn’t collapsing due to the state’s highest legal authority not having a full bench. This is all backpedaling because the left got caught with their hand in the cookie jar.

But, of course, the major news networks–like NBC and ABC–are ignoring Obama’s Alito filibuster, while some on the left are saying that Republicans are going to block his nominee because he’s black. The cards for this typical progressive game, bias by omission and mentioning race, seem to have already been dealt–and now the headache begins.

BONUS: Then-Sen. Obama says one of his concerns about Alito was his apparent belief in an "unconstrained executive." Now, that's just rich.

From 2006, Senator Obama on voting against Judge Alito: "It appears that he believes in an unconstrained executive branch and does not seem to have much concern or regard for the most vulnerable in our society." http://cs.pn/1mHsopQ