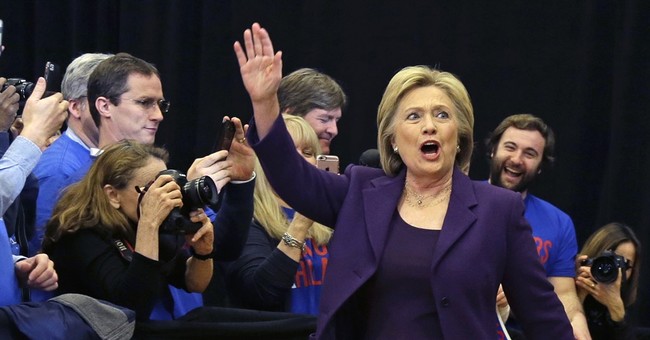 With Maryland Gov. Martin O’Malley out of the race, the Democratic field is now Sen. Bernie Sanders (D-VT) and Hillary Clinton. The average age of the Democratic field is 71. First, read Guy’s post about how the Clinton campaign is nervous about Monday night’s tallies, where she barely eked out a win over Sanders, mostly due to coin tosses. Another surprise was the fact that Sanders apparently overcame the biggest turnout obstacles he faced in the state: turning out voters who really don’t vote. And the voters we’re talking about are young liberals.

In that breakdown, it truly is the old guard vs. an emerging new order, despite both candidates being part of the Washington beltway for at least two decades.

With income, it was hero of the proletariat, Sanders, vs. money bags Clinton:

Clinton won the East Central, Des Moines Area and Central parts of the state, while she tied Sanders in the Eastern cities and the West. Those who described themselves as Democrats broke for Clinton 56/39; Sanders took the “Independent and something else” crowd 69/26. He also nabbed the “very liberal” voters 58/39 over Clinton, whereas the former first lady took somewhat liberal and moderates 50/44 and 58/35 respectively.

Clinton won Democratic voters regarding questions about her electability (77/17) and experience (88/9), while Sanders handily won those concerned with the empathy portions (aka the candidate who “cares about people like me” question) (74/22) and honest and trustworthy (83/10). When it comes to health care, it wasn’t shocking either; the Sanders people only trust him on the issue and vice-versa with Hillary.

Another interesting aspect of the Democratic exits belonged to unmarried women. This key (and mostly liberal) voting bloc went to Sanders, showing that identity politics wasn't really a factor in this contest . This is a woman who had a significant double-digit lead over Sanders–and wasted it (throwback to Obama). The Des Moines Register poll released last August showing that her support had dropped by a third at the time, a course projecting an eventual defeat for her for the then-upcoming caucuses, serves as a prophetic event for the first 2016 bout for Democrats.

As Guy outlined in his post, Monday night’s results prove that Clinton is still a bad campaigner. Yet, she dodged a blowout loss (which didn’t seem likely) meaning that her southern firewall should be able to keep Sanders from toppling her for the nomination, despite the poor optics and criticisms of weakness associated with losing key primary contests as the frontrunner. Also, as the Cook Report noted, the delegate math is still in her favor:

In other words, if Sanders prevails narrowly in Iowa or New Hampshire, his support among liberal whites and in college towns - essentially Portlandia - would be entirely consistent with a scenario in which he also gets clobbered by Clinton nationally.

As Cook National Editor Amy Walter wrote last week, this race will come down to whether Sanders is Howard Dean or Barack Obama. While Dean fizzled in Iowa, Obama's Iowa win solidified his burgeoning popularity among white liberals but also legitimized his candidacy in the eyes of many previously skeptical African-American voters. But so far, there are few hints of a Sanders "expansion" constituency beyond liberal whites.

There's another gigantic Sanders math problem the Post failed to mention: thanks to Clinton's early dominance of superdelegates, he effectively begins the race eight points behind in the delegate count, before any votes are even cast.

So, Sanders is probably going to beat Hillary in New Hampshire, but he faces uncertainty as he heads towards the Mason-Dixon line. Then again, the Clinton attacks against him have only led to significant campaign donations flowing into the Sanders camp. Post-Iowa, the self-described democratic socialist has raked in $3 million from donors.