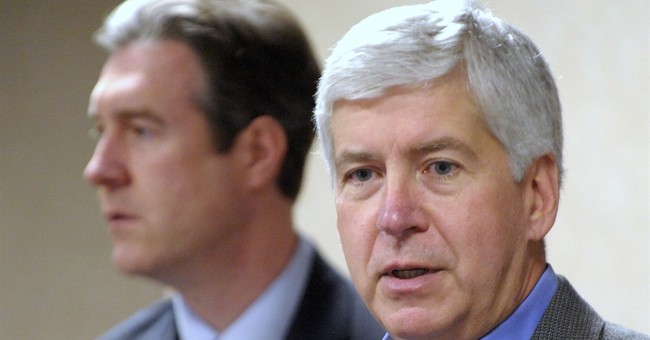 Please go read Justin’s post about the first batch of Syrian refugees arriving in Louisiana. About 2,000 are already here. The Obama administration already said they would accept 10,000 refugees back in September, despite warnings from the FBI that there would be “gaps” in the screening process. Right now, there is no way for the Department of Justice to check every Syrian refugee coming into the country. It’s a glaring national security issue. One that has become more salient given the horrific terror attacks in Paris last Friday, which was ordered by the Islamic State. In Michigan, Gov. Rick Snyder has suspended the Syrian relocation effort until the security issues are addressed (via Detroit Free Press):

Given the terrible situation in Paris, I've directed that we put on hold our efforts to accept new refugees until the U.S. Department of Homeland Security completes a full review of security clearances and procedures," Snyder said in a statement released by his office on Sunday.

"Michigan is a welcoming state and we are proud of our rich history of immigration," the statement said. "But our first priority is protecting the safety of our residents."

More than 120 people were killed in Paris on Friday night, and hundreds more injured, in a series of suicide bombings and attacks on nightspots using automatic weapons.

Multiple news agencies have reported that a Syrian passport found at the scene of one of the attacks matches a refugee who traveled through Greece.

Snyder said in September he was working with the federal government to determine the process for accepting refugees from the ongoing crisis in Syria and the Middle East.

More Syrians could come into the country, as the U.S. plans to raise its overall quota in accepting refugees. The quote is currently at 70,000, but plans to be raised to 85,000 by 2016, then to 100,000 the following year. Secretary John Kerry said he would look at increasing that cap beyond 100,000, while implementing background checks to prevent terrorists from entering the country, according to the New York Times.

I’m not sure that’s such a hot selling point right now. In fact, it never really was.