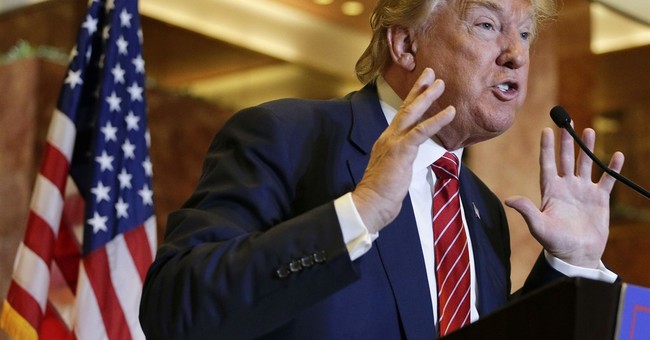 Donald Trump unveiled his tax reform policy, which would make millions exempt from federal income taxes. He also plans to reduce corporate taxes, close loopholes that only benefit the very wealthy, and eliminate the death tax. The Trump plan also reorganizes the code into four income brackets subject to taxation (0%, 10%, 20%, and 25%):

If you are single and earn less than $25,000, or married and jointly earn less than $50,000, you will not owe any income tax. That removes nearly 75 million households – over 50% – from the income tax rolls. They get a new one-page form to send the IRS saying, “I win,” those who would otherwise owe income taxes will save an average of nearly $1,000 each.

All other Americans will get a simpler tax code with four brackets – 0%, 10%, 20% and 25% – instead of the current seven. This new tax code eliminates the marriage penalty and the Alternative Minimum Tax (AMT) while providing the lowest tax rate since before World War II.

No business of any size, from a Fortune 500 to a mom and pop shop to a freelancer living job to job, will pay more than 15% of their business income in taxes. This lower rate makes corporate inversions unnecessary by making America’s tax rate one of the best in the world.

No family will have to pay the death tax. You earned and saved that money for your family, not the government. You paid taxes on it when you earned it.

Here’s the breakdown of the new income brackets (via WSJ):

Under the Trump plan, no federal income tax would be levied against individuals earning less than $25,000 and married couples earning less than $50,000. The Trump campaign estimates that would reduce taxes to zero for 31 million households that currently pay at least some income tax. The highest individual income-tax rate would be 25%, compared with the current 39.6% rate.

The plan proposes to simplify tax filing for many lower- to middle-income households. The plan says that some 42 million households that currently file tax forms to establish that they don’t owe any federal income tax now will be able to file their returns on a single page.

Tax reform is an issue that both Democrats and Republicans agree on, but we’ve been talking about taxes and reforming the code for years with no action. Another radical notion (I mean that in a good way) is that we sunset the tax code. Colin Hanna of Let Freedom Ring, a nonpartisan, non-profit organization that is the brainchild of this policy, said the whole 74,000 page-plus code should expire in 2019, which should be enough time to have a serious national conversation about this issue. Maybe Trump’s plan is a good foundation in the debate.

Americans for Tax Reform’s Grover Norquist came away with some nice things to say about the plan, calling it “perfectly consistent with the Taxpayer Protection Pledge," something that the billionaire business magnate has yet to sign.

Donald Trump’s tax reform plan--released Monday am -- is perfectly consistent with the Taxpayer protection Pledge. (the problem is spending)

Norquist reiterated that point to CBS This Morning, saying Trump’s plan is “pro-growth, it’s not a net tax increase. It will, in fact, be a tax cut, statically scored, and sits comfortably within the parameters” of his organization’s mission.

ATR also analyzed Trump’s plan, saying that they’re opposed on the slight tax increase within his capital gains reforms, and the fact that there’s “no movement” on full business expensing (allowing businesses to expense furniture, electronic equipment etc. from their taxable income). They also added that a little more detail wouldn’t hurt regarding the other deductions that will help pay for this reform:

It's also important to note that with a top ordinary income tax rate of 25 percent, the carried interest tax rate hike on "hedge fund guys" is fairly modest, rising from 23.8 percent today to 25 percent under the Trump plan. ATR opposes this tax increase.

Other deductions and credits: Tax breaks for high-income taxpayers and large firms will also be eliminated, but these are not specified.

No movement to full business expensing: The most disappointing part of the Trump plan is that the tax system would move no closer to full expensing of business fixed investment. Businesses would still be saddled with the complex, distorting, and growth-inhibiting "depreciation" regime where an asset is deducted over several or even many years. Far better would be to move to a full-expensing business cash flow model, where all business inputs including investments are deducted in the year spent. While this is somewhat ameliorated by the far lower tax rates, a lack of progress here is the plan's biggest drawback.

Either way, on tax reform, all ideas should be welcomed because we all know out system is a mess. At the same time, some might feel uneasy about a significant proportion of the country paying no income taxes, while also receiving government services. That creates, as George Will noted, a situation of moral hazard where declining tax participation rates creates a large class of people who have no interest in curtailing a growing government they aren’t paying for on an annual basis. Additionally, this creates a perfect voting demographic wherein the Democratic Party can demagogue (they’re already doing this by the way) and slam Republicans for being anti-poor (ridiculous), while they advocate for necessary cuts, or reforms, to our welfare state that will get our financial house in order.