Donald Trump On The Second Amendment: ‘Protecting That Freedom Is Imperative’ 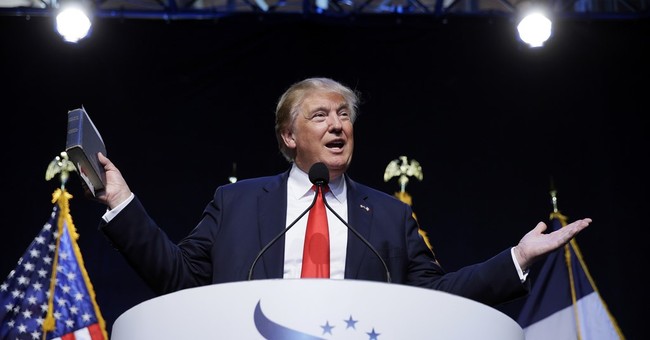 Last Friday, The Donald released his position paper on Second Amendment rights–and it wasn’t too bad. In fact, any freedom loving, gun rights supporter would support it. The vast majority of what’s in this policy paper is good. Mr. Trump voices his support for national right to carry, reforming our mental health system, ending gun-free zones on military bases and recruitment centers, and fixing the background check system.  He also called magazine and assault weapons bans "total failures."

On background checks, Trump noted that we should do more to incorporate criminal and mental health records. The majority of states already provide mental health information to the National Instant Background Check System. The issue regarding expanding background checks to prevent the mentally ill from obtaining firearms is navigating through due process, the right to privacy, patient-doctor confidentiality, and constitutional rights to make sure this process is fair, legal, and effective. Not every person with mental illness commits a mass shooting, though the mentally ill tend to make up the lion share of mass shooters. Moreover, not every mental illness or disorder should prohibit a person from owning firearms. I don’t think Asperger’s syndrome is something that should prevent someone from exercising his or her Second Amendment rights. This is a huge part of the debate that the pro-gun control seems to view as anathema.

Additionally, what if a person voices his plans to commit mass murder on any social media platform out there. Eliot Rodgers did so, he even wrote about it. It became so disturbing that authorities went to his residence to check up on him. Does law enforcement have the right to ask the person if he has firearms when they make threats of violence on social media (normal people don’t do this)? I’m leaning towards yes, but there the due process portion (again) remains to be debated.

As for national right to carry and the end of gun-free zones on military bases, the Donald is right. On the Project Exile portion, in which he voices support for a mandatory minimum sentence on those prohibited persons who use a firearm in a crime, the results of the program were not as shining as the policy paper lays out. Moreover, Gun Owners of America noted that the record of success was mixed.

As for the opposition for a new assault weapons ban, I’m glad the Donald has seen the light, though any gun owner and Second Amendment supporter should be wary. Trump supported an assault weapons ban (including other policies that place his diametrically opposed to the conservative movement) and longer wait periods for gun purchases prior to his decision to run for president, but Dr. Ben Carson and Gov. Chris Christie aren’t the strongest Second Amendment supporters either.

Overall, on paper, Mr. Trump voices support for what most in the Second Amendment community agree upon, but is it authentic?

GUN AND MAGAZINE BANS. Gun and magazine bans are a total failure. That’s been proven every time it’s been tried. Opponents of gun rights try to come up with scary sounding phrases like “assault weapons”, “military-style weapons” and “high capacity magazines” to confuse people. What they’re really talking about are popular semi-automatic rifles and standard magazines that are owned by tens of millions of Americans. Law-abiding people should be allowed to own the firearm of their choice. The government has no business dictating what types of firearms good, honest people are allowed to own.

BACKGROUND CHECKS. There has been a national background check system in place since 1998. Every time a person buys a gun from a federally licensed gun dealer – which is the overwhelming majority of all gun purchases – they go through a federal background check. Study after study has shown that very few criminals are stupid enough to try and pass a background check – they get their guns from friends/family members or by stealing them. So the overwhelming majority of people who go through background checks are law-abiding gun owners. When the system was created, gun owners were promised that it would be instant, accurate and fair. Unfortunately, that isn’t the case today. Too many states are failing to put criminal and mental health records into the system – and it should go without saying that a system’s only going to be as effective as the records that are put into it. What we need to do is fix the system we have and make it work as intended. What we don’t need to do is expand a broken system.

NATIONAL RIGHT TO CARRY. The right of self-defense doesn’t stop at the end of your driveway. That’s why I have a concealed carry permit and why tens of millions of Americans do too. That permit should be valid in all 50 states. A driver’s license works in every state, so it’s common sense that a concealed carry permit should work in every state. If we can do that for driving – which is a privilege, not a right – then surely we can do that for concealed carry, which is a right, not a privilege.

MILITARY BASES AND RECRUITING CENTERS. Banning our military from carrying firearms on bases and at recruiting centers is ridiculous. We train our military how to safely and responsibly use firearms, but our current policies leave them defenseless. To make America great again, we need a strong military. To have a strong military, we need to allow them to defend themselves.