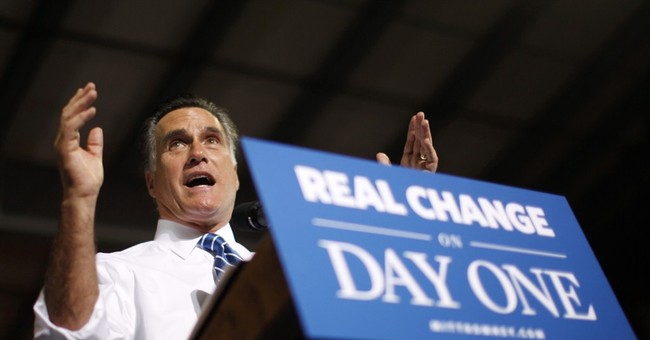 Don’t get me wrong; I think former Republican Massachusetts Gov. Mitt Romney is a good man. He’s a successful venture capitalist, and raised a great family–he’s the embodiment of the American dream. That doesn’t mean he needs to run again.

As Trumpmentum continues to move forward with no sign of stopping, Romney’s people have been chirping about Mitt 2016. For starters, Gabriel Sherman wrote in New York Magazine that the governor holds civility in high regard, something that Trump isn’t interested in channeling as he makes his 2016 run. That "bothers" Mr. Romney. Moreover, the establishment is aloof; unable to pick someone they truly stand behind. Jeb was thought to have been that person, but his donors are reportedly jumping ship, as his candidacy has so far been unable to take off. Romney is also dabbling in the primary by other means in the hope to prevent the chaos that left him bloodied and beaten upon winning the 2012 nomination. So, I could see why some are looking to him to save the GOP from the chaos.

Michael Brendan Dougherty wrote in The Week earlier this month that Mitt should give it another go–and his reasons weren’t bad (though that doesn't meant Mitt 2016 is a good idea):

Romney should be ready to enter the field to save his party from an awful reckoning between its leadership and its base, a reckoning that has been brought on by Donald Trump's campaign. Trump has proven that the "strongest GOP primary field in 30 years" is no such thing, creating an opening for the winner of the last primary. If Romney should win the primary, it would be an incredible political comeback. It would also be a gift to his party, forcing on the GOP the reality of a new and stable settlement between its factions.

Romney, if he can secure the nomination, has a much better shot in 2016 than he did in 2012. He would be running against Obama's third term, with the torch passed to a much less talented and more scandal-plagued Hillary Clinton. Obama and Romney were well-matched as devoted husbands and ethically sound politicians. In a contest against Clinton, Romney looks much better by comparison. Furthermore, ObamaCare is no longer the defining issue of the election, and Romney can run as the man to reform the reform, not revoke it.

The very inability of the Republican establishment to decide on a candidate for the whole party is a sign of the mortal condition of the party's WASP core and the decline of Mainline Protestantism. The Republican Party has for over a century operated with a Brahmin class. It needs a new one.

And thus they are a natural successor class to the WASPs in the Republican Party. In fact, they may be an improvement. The Mountain West is a rich source of Republican leaders, a moderating check on the political and ideological excesses of Evangelicalism, and a wellspring of religious sensibility for an American culture that believes in material progress and prefers pro-family sentiment to pro-family doctrine. These are all the features that Mainline Protestant elites brought to the GOP, but in Mormon America they are combined with a frontier-style relish for competition and entrepreneurship, and a more exalted view of family formation. Mormons are America's more adventurous gentry class.

Yet, health care will still be an issue, and Mitt Romney is the only candidate who cannot run and discuss this issue honestly due to his ties to Romneycare. It served as the blueprint for Obamacare. How can that person honestly be the standard-bearer in the fight to reform it? He’s not going to resonate with the white, working class voters. While this group has so far flocked to the GOP, about three to four million of them stayed home in 2012. Obama was too liberal, but Romney offered nothing that they felt could have improved their economic conditions. As many commentators noted, Romney looks like the guy who would fire you from a job, than hire you for one. Romney would have been elected president if he had won just three percent more of the white vote in 2012.

Concerning Hispanic voters, of course, Republicans should be gunning for every vote possible–but Romney would dredge up the self-deportation remarks he made in the 2012 primary, which pretty much killed outreach efforts for every nonwhite voting bloc, especially those with immigrant families.

Granted, Hispanics are a demographic that has a disproportionate number of eligible voters due to immigration status; they live in states that aren’t competitive (Texas is staying red and California will remain blue); and they will represent a small portion of the electorate in 2016; more African-Americans voted in 2012 than Hispanics. Yet, we need to win Florida, and while it was close; Romney wasn’t able to deliver. And we shouldn’t bank on him succeeding again if he were to hypothetically run for a third time. That’s quite the bet.

There are personal reasons. He said it didn’t feel right to give it another try back in March. There’s also the toll of taking on another national campaign, which is a tortuous and emotionally draining process. It’s one of the reasons why many joke that people who want to be president are mentally insane. There’s also the spouse factor. Ann Romney will probably be one of Mitt’s biggest assets on the trail. A united family front helps with any daunting task. It’s not just politics where your wife (or husband) and the rest of the family can help someone pull through and keep on going. Things are just a little more complicated in the Romney family, given that Ann has multiple sclerosis. That’s not to say that she’s unable to get on the bus again with her husband. But there are more private health matters that need to be tediously analyzed if Mitt wants to do this again. I’m guessing he wouldn't want to do that. Lastly, he has no political team assembled. No infrastructure. No fundraisers. Nothing.

Mitt has a great life story. It’s one that’s certainly an asset in politics, but this Romney 2016 talk needs to go away with grace. Mitt has run for the presidency twice and failed. He can still do great things for the party, but probably not as president. Let’s not go the way of Guns N’ Roses with Mitt 2016; let it die with dignity.