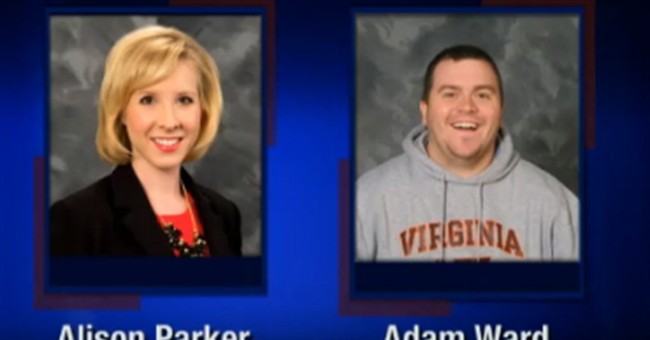 The video showing the deaths of Alison Parker and her videographer, Adam Ward, is horrific. Parker and Ward of WDBJ7–a local CBS station–were in Moneta, Virginia around 6:45am this morning when suspect Vester Lee Flanagan, a reportedly “disgruntled” ex-employee, opened fire. As Cortney reported earlier this morning, Parker was interviewing local Chamber Commerce official Vicki Gardner, who was hit in the back. She’s currently in surgery.

This is a horrific incident. Parker was 24-years-old. Ward was 27. Our thoughts and prayers are with them and their families. Sadly, not everyone had such sentiments. While they may have offered prayers, the gun control crowd unsurprisingly took a jab at the National Rifle Association in yet another feeble attempt to make their cause relevant.

First, let’s go to Everytown’s Twitter account, who decided to remind us that a firearm is the weapons of choice for domestic abusers. Katie wrote a while back how they even produced an ad about this subject, which actually demonstrated why more women should exercise their Second Amendment rights.  Obviously, that wasn't their intention.

The United States the most dangerous country for women in the developed world. #WDBJ pic.twitter.com/ijiIFq5bFY

Then, the New York Post’s Bart Hubbuch who decided to engage in similar nonsensical behavior, praising New York City’s tough gun laws while also claiming that today’s tragedy was “another proud moment for the NRA.”

Horrifying. Another proud moment for the NRA. Thank you, NYC, for your strict gun laws! https://t.co/RyW73dh5nL

I support your Second Amendment right to be well regulated.

People bum-rushing my mentions: If you want to live where guys tote AR-15s to the grocery store, fine. I just choose to live somewhere sane.

People bum-rushing my mentions: If you want to live where guys tote AR-15s to the grocery store, fine. I just choose to live somewhere sane.

Virginia Gov. Terry McAuliffe tweeted that he was “heartbroken over [these] senseless murder today,” but also made a call for more gun control:

Virginia Gov. Terry McAuliffe called for tighter gun laws in response to the deadly shooting of two Roanoke, Virginia-based TV journalists during a live broadcast this morning in his state.

“There are too many guns in the hands of people that shouldn’t have guns,” McAuliffe said during an interview with WTOP. “There is too much gun violence in America,” he said, adding that he has long advocated for strengthening gun background checks and that it should be made a priority.

For starters, I wish I could say a prayer and offer a condolence without things getting political, but the other side has no standards, no decency, and must make made statements in the hopes that the national attitude towards, in this instance, Second Amendment rights might change with this horrific double-murder. It’s hasn’t. It won’t.

In Virginia, our gun laws will be safe. We have a Republican-controlled legislature, with a supermajority in the House of Delegates. We’ve killed gun control measures from the governor before, and it will happen again.

While New York City has strict gun laws, so does Washington D.C.–and they’re seeing a spike in homicides. Police Chief Cathy Lanier says this is due to an influx of firearms with high-capacity magazines. Yet, Fox5DC’s Emily Miller aptly noted that magazine capacity isn’t listed on the police form regarding recovered firearms:

Last week, I asked the chief to back up her claim.

“In D.C., over ten rounds is high capacity, but your department doesn’t trace what kind of magazine size guns have. I’m asking when you say high capacity, where are you getting that information?" I asked.

“From the guns that we’ve recovered,” Lanier responded.

“So I'm talking about 100-round drum magazines -- that would be high capacity.”

She also added, “High-capacity magazines are magazines that are designed to enhance the normal capacity of a firearm.”

But a form police use when they get property in a crime has a section for firearms. It asks for a brand name -- a Glock would be an example for that column -- and then type -- such as a handgun or rifle.

Then there are other specifics. No. of shots is for how many rounds of ammunition is still in the gun when the police seize it.

But there is no section for ammunition capacity on the form, which means how many rounds the gun, could hold. Sources in the police department said they just don’t track it.

Maybe the spike in crime in DC–and in Chicago–are due to stringent anti-gun laws that keep law-abiding citizens open to harm, chief. As for New York City, there’s an ongoing debate about whether stop and frisk was effective. Moreover, a change in policing–broken windows theory–during the Giuliani mayoralty might have also impacted the decrease in New York City’s crime rate. After all, New York City wasn’t always safe. For nearly a quarter century, the city was a nightmare, with homicides soaring to over 2,000 by 1990. I doubt the murder rate ever reached that high in Moneta, Virginia, even by percentage.

Regardless, today was a dark day. The families of these two young journalists are devastated, and they surely got no help from the political left today. Keep in mind, that all of this progressive nonsense was being spewed before the suspect was even caught. We now know that Flanagan shot himself and is in critical condition.

.@NRA Was that on-air double homicide by handgun sponsored content?

The @NRA & the politicians they own must not know this T. Jefferson quote. The 2nd Amendment is a FUCKING BOY'S COAT. pic.twitter.com/cKR0Nk4Uwm

And, we have NYT Mag's Julia Ioffe for the win with these tweets.

Guns and social media. This is America 2015, a brave new world.

Clinton also gave her thoughts, which, as Truth Revolt's Caleb Howe noted, placed prayers for the victims' families in the third spot.

Heartbroken and angry. We must act to stop gun violence, and we cannot wait any longer. Praying for the victims' families in Virginia. -H

Friendly Reminder: That time RedState's Erick Erickson said that everything is political to the left, there's an arc of history where they must land on the right side of, and you will be forced to care. No one can escape. This is why such tragic incidents will always turn into political theater.