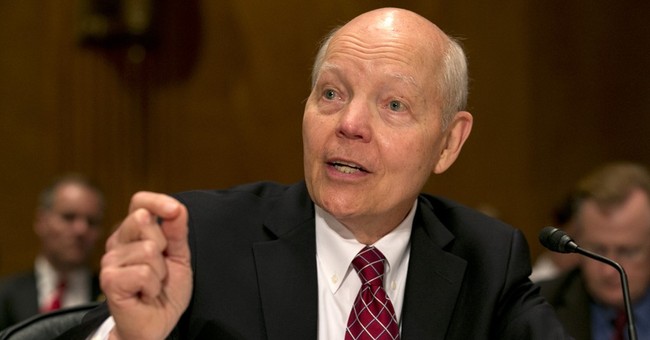 Forget about the stonewalling IRS Commissioner John Koskinen engaged in regarding the Lois Lerner emails; the lackluster attempt to find such emails; and the erasure of back-up tapes that contained 24,000 emails from Lerner which were under subpoena. Today, we honor John Koskinen for being quite the oinker when it comes to government spending (how am I not surprised?). That’s why Citizens Against Government Waste named him the Porker of the Month:

The ceaseless refrain from Commissioner Koskinen when criticized is to blame congressional budget cuts for IRS failures. This response rings hollow in the face of the IRS spending $4.3 million on public opinion polling in 2014 and nearly $4 million on office furniture. On May 5, 2015, TIGTA [Treasury Inspector General for Tax Administration] investigators found that the IRS issued $5.6 billion in potentially phony education tax credits in 2014 alone. The growing epidemic of Stolen Identity Refund Fraud allowed $5.8 billion to be paid out to fraudulent filers in 2013. A TIGTA report on April 14, 2015 found 1,580 IRS employees willfully did not pay taxes, and 18,300 who unintentionally did not pay. Even worse, 108 of those employees received bonuses totaling nearly $145,000. Despite all of this evidence that his agency is inept or worse, Commissioner Koskinen refused to allow bonuses in the IRS to be cut from 2014 to 2015.

I think CAGW made the right call with this one. Congratulations, Mr. Koskinen. It’s much deserved.

Lois Lerner was the Director of the Exempt Organizations for the IRS, and was accused of politically targeting conservative groups filing for non-profit status.