Trump: Single-Payer Health Care 'Could Have Worked In A Different Age' 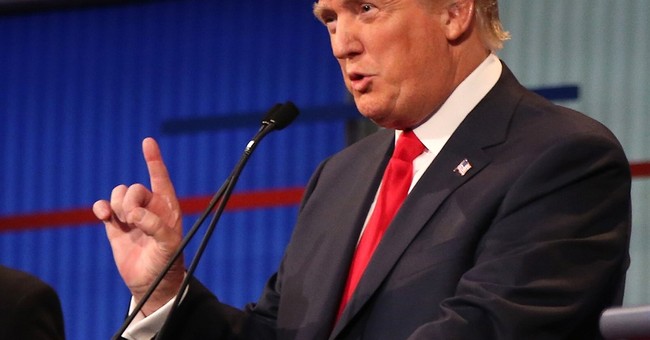 During the August 6 debate, GOP frontrunner and billionaire business magnate Donald Trump had some of his dirty laundry aired out in front of him, specifically his support for single-payer health care. Fox News’ Bret Baier asked the question, in which the Donald replied by saying that he was against the Iraq War. He also said that a single-payer system “works” in Canada and Scotland, and that it could have worked in America “in a different age,” which I’m guessing he means by 15 years ago:

BRET BAIER: Gentlemen, the next series of questions deals with ObamaCare and the role of the federal government.

Mr. Trump, ObamaCare is one of the things you call a disaster.

BAIER: Saying it needs to be repealed and replaced.

BAIER: Now, 15 years ago, uncalled yourself a liberal on health care. You were for a single-payer system, a Canadian-style system.

Why were you for that then and why aren't you for it now?

TRUMP: First of all, I'd like to just go back to one. In July of 2004, I came out strongly against the war with Iraq, because it was going to destabilize the Middle East. And I'm the only one on this stage that knew that and had the vision to say it. And that's exactly what happened.

BAIER: But on ObamaCare...

TRUMP: And the Middle East became totally destabilized. So I just want to say.

As far as single payer, it works in Canada. It works incredibly well in Scotland. It could have worked in a different age, which is the age you're talking about here. What I'd like to see is a private system without the artificial lines around every state. I have a big company with thousands and thousands of employees. And if I'm negotiating in New York or in New Jersey or in California, I have like one bidder. Nobody can bid.

But they have total control of the politicians. They're making a fortune.

Get rid of the artificial lines and you will have...

Okay. Well, let’s go to Forbes’ Avik Roy, whose area of expertise is health care policy. He’s also a senior advisor to former Texas Gov. Rick Perry. He outlines how Canada and Scotland are really not that good regarding health care policy since wait times for the sick are abysmal.  Moreover, Canada's system works because most of the Canadian population can come to the United States for better quality of care. In Scotland, the survival rate for prostate cancer, which is highly treatable, has a dismal 42 percent survival rate after five years:

Lost in the Megan Kelly shuffle is still the best nugget of the debate: Donald Trump still supports single-payer healthcare

Martin Samuels, the founder of the neurology department at Harvard’s Brigham and Women’s Hospital, found this out when he worked as a visiting professor in Canada. “The reason the Canadian health care system works as well as it does (and that is not by any means optimal) is because 90% of the population is within driving distance of the United States where the privately insured can be Seattled, Minneapolised, Mayoed, Detroited, Chicagoed, Clevelanded and Buffaloed,” Samuels wrote recently in Forbes. “In the United States, there is no analogous safety valve.”

The sick in Scotland, unfortunately, have no such safety valve. They are forced to wait, and wait, and wait. In 2008, a group of investigators conducted a worldwide study of cancer survival rates, called CONCORD. The investigators asked the question: if you get diagnosed in your country with breast cancer, or colon cancer, or prostate cancer, how long are you likely to live?

Trump’s policy pronouncements are rarely coherent. But what he appears to be saying here is that he supports a privatized version of single-payer health care, in which perhaps a single private company has a monopoly with which to negotiate contracts with hospitals and doctors. Gone would be companies like Aetna, Anthem, UnitedHealth, and Blue Cross—or perhaps they would be merged into a single entity.

This is hardly a superior outcome to single-payer health care: an unaccountable, trillion-dollar private insurance monopoly.

Some of Trump’s aides attempt to backfill the Donald’s ideas by claiming he really wants to “repeal and replace Obamacare” with something more consistent with conservative principles. But Trump himself has never backed off from his support for government-run health care. Indeed, Trump believes that the problem with Obamacare is that it doesn’t go far enough.

Trump has donated heavily to the Democratic Party, whose electoral dividends led to Harry Reid and Nancy Pelosi passing the Affordable Care Act in 2010.