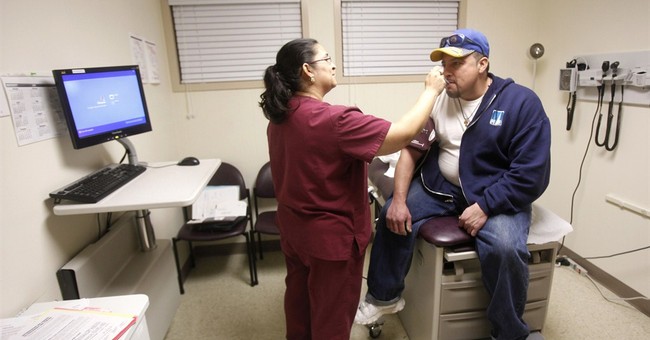 I’m sure most of you already know this, but Medicaid expansion–a critical component of Obamacare–is an abject disaster. In Virginia, almost a quarter of doctors aren’t accepting new Medicaid recipients–and those already enrolled into this government-run health care program experienced no improvement in care.

So, how is this a good blueprint for the rest of the country? Well, as you know, it isn’t–and the figures get worse regarding who is actually receiving care under this government program. As the Foundation for Government Accountability reiterated during their conference in June, there are still a lot of misconceptions about Medicaid expansion.

For starters, let’s go over the talking points (again).

First, it’s not “free money;” the federal debt is projected to grow over $26 trillion dollars over the next decade.

Second, there is no flexibility whatsoever with Medicaid expansion. Nicholas Horton, FGA’s Policy Impact Specialist, noted that the Obama administration holds all the cards.

Third, the costs are easy to predict. This is a government program; need I say more.

Horton is from Arkansas, and he’s seen first hand how Medicaid expansion has been a budget buster.

Medicaid was meant to provide health care to low-income families and individuals, but since it became incorporated into the Obama administration’s ACA arsenal, it’s now taking resources from the truly destitute and subsidizing childless, able-bodied Americans since eligibility has been increased. Oh, and some convicts are getting a nice ride on the government’s dime (via FGA):

Unlike other forms of welfare, Medicaid has no work requirement, meaning states are being asked to expand eligibility for taxpayer- funded Medicaid to able-bodied, non-working adults. Research shows that expanding Medicaid to this new class of individuals discourages work, depresses earnings, reduces labor-force participation and hurts the economy.

Worse yet, the U.S. Department of Justice estimates that more than 35 percent of these potential new Medicaid enrollees have previous involvement in the criminal justice system, with many having been incarcerated.9 Put another way, ObamaCare’s Medicaid expansion does nothing to protect or support kids, seniors, individuals with disabilities on waiting lists or pregnant women. Instead, it gives taxpayer- funded Medicaid to able-bodied adults, largely without dependent children, largely unwilling to work, with many having a record of serving time in jail or prison.

ObamaCare’s goal of adding millions of able-bodied adults to Medicaid will inevitably make access problems even worse. Expansion greatly increases demand for services, but does nothing to increase the supply of health care providers accepting Medicaid patients. Compounding this problem is a perverse and immoral funding formula that prods states to attack the truly needy with cuts in services and gives preferential treatment to adults without any disabilities or dependent children.

ObamaCare does not change the funding structure for patients currently eligible for Medicaid. States continue to receive their regular matching rate for providing coverage to poor children, seniors and individuals with disabilities. These rates can range from a low of 50 percent to a high of 83 percent, depending on a state’s per-capita income.13 On average, the federal government pays for roughly 57 percent of a state’s current Medicaid expenditures.

As Medicaid gobbles up state budgets due to costs exceeding state revenues, legislatures must cut $2 to $3 in cuts from other parts of the budget in order to save just a dollar in Medicaid spending.

Lastly, when it comes to overall care, Forbes’ Avik Roy has described Medicaid as a “humanitarian catastrophe” in 2011. For starters, on average, those who enrolled in Medicaid actually fare worse than Americans who remain uninsured.

Last July, I wrote about a landmark study conducted at the University of Virginia that found that surgical patients on Medicaid are 13 percent more likely to die than those without insurance of any kind. The study evaluated 893,658 major surgical operations from around the country from 2003 to 2007, and normalized the results for age, gender, income, geographic region, operation, and 30 background diseases.

Despite all of these adjustments, surgical patients on Medicaid were nearly twice as likely to die before leaving the hospital than those with private insurance.

Concerning the hospitals, they thought Medicaid expansion would help them recoup the cost of uncompensated care from the uninsured. That didn’t happen (via WSJ):

The health law’s expansion of Medicaid in many states hasn’t benefited nonprofit hospitals in those states as expected, according to a new report by Moody’s Investors Service.

Hospitals in the mostly blue states that expanded Medicaid were largely expected to benefit from fewer unpaid bills and more paying customers, but that hasn’t generally translated into better operating margins or cash flow, Moody’s found.

Performance improved across the board—including in the mostly Republican-led states that opted out of the law’s Medicaid expansion—as the economy gained steam last year and unemployment declined.

In expansion states, hospitals’ unpaid bills fell 13% on average last year compared with 2013, the report found. But, their 2014 operating margins didn’t increase any more than hospitals in the 22 states that have sat out the expansion, the report shows.

In Illinois, where Medicaid rolls grew by about 500,000 after the law’s key provisions took effect, one hospital found the changes didn’t fuel any big financial improvement.

“We did see a significant decrease in” unpaid bills, said Michael Kasser, chief financial officer of Southern Illinois Healthcare, which runs three hospitals southeast of St. Louis. “The bad news is, we saw such a huge increase in Medicaid,” he said, noting that the program pays only about half the hospital’s costs, on average.

He said the hospitals saved about $9 million in unpaid bills, but incurred around $28 million in costs for Medicaid patients, only about half of which was reimbursed by the state-run program. The result: Losses of around $5 million, despite expansion.

So, given the costs, the new enrollees, and the impact on the quality of care, you still will be turned into an anti-poor Neanderthal by the media if you don’t support Medicaid expansion. So, how does one fight back against such a narrative that percolates through the layers of the liberal media like sulfuric acid? For starters, mention how Medicaid expansion would certainly lead to cuts in infrastructure, education, and public safety. According to the FGA's polling, support for expansion drops, with 62 percent opposing a measure given the areas needed to be cut in order to maintain the programs at sustainable levels. Fifty-six percent oppose expanding Medicaid when you mention that a third of eligible recipients could have a criminal background. The highest level of opposition to Medicaid expansion registers at 65 percent when you mention that $716 billion would need to be cut from Medicare in order to cover most of the costs of the expansion.

For now, the best we can do post-Burwell is hold the line–and Medicaid expansion is a key battle in that struggle.