Shakespeare Besieged By Emojis and For Being A White Dude 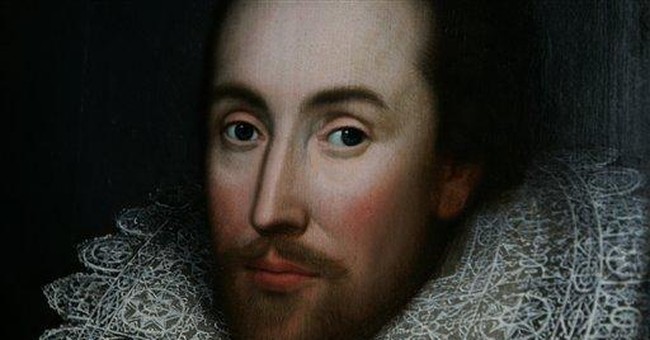 My colleague Christine wrote earlier this week about how Shakespeare is being eviscerated by an emoji-based series of his works. No, seriously; “OMG Shakespeare” is a thing, with "YOLO Juliet” and “srsly Hamlet.” It’s horrifying–and the revered English bard’s works are not that hard to read. Now, there’s a second front to this madness. We should stop teaching him altogether because he’s a white dude, and the world has changed a lot since then. Dana Dusbiber, at Luther Burbank High School in Sacramento, California, argued this point, and why we shouldn’t have to “cling” to him (via WaPo) [emphasis mine]:

What I worry about is that as long as we continue to cling to ONE (white) MAN’S view of life as he lived it so long ago, we (perhaps unwittingly) promote the notion that other cultural perspectives are less important. In the 25 years that I have been a secondary teacher, I have heard countless times, from respected teachers (mostly white), that they will ALWAYS teach Shakespeare, because our students need Shakespeare and his teachings on the human condition.

So I ask, why not teach the oral tradition out of Africa, which includes an equally relevant commentary on human behavior? Why not teach translations of early writings or oral storytelling from Latin America or Southeast Asia other parts of the world? Many, many of our students come from these languages and traditions. Why do our students not deserve to study these “other” literatures with equal time and value? And if time is the issue in our classrooms, perhaps we no longer have the time to study the Western canon that so many of us know and hold dear.

Here then, is my argument: If we only teach students of color, as I have been fortunate to do my entire career, then it is far past the time for us to dispense with our Eurocentric presentation of the literary world. Conversely, if we only teach white students, it is our imperative duty to open them up to a world of diversity through literature that they may never encounter anywhere else in their lives. I admit that this proposal, that we leave Shakespeare out of the English curriculum entirely, will offend many.

Well, speaking as a person of color, I remember from my middle/high school days that I couldn’t have cared less that we didn’t read literature from my neck of the woods (Asia). I like Shakespeare, and I never took Shakespeare’s race and gender into account because, well, that’s irrelevant. Also, I liked the plays we read in class, though I’m fonder of his darker works; Macbeth is one of my favorites.

Yet, here’s the thing: Shakespeare one of the greatest writers (if not the greatest) writers of the English language. The fact that any English teacher would remove him from the syllabus because of some haphazard, white-guilt notion that analyzing his works in class will somehow make Asians, Blacks, Hispanics, or other students of color could get depressed, or feel bad about themselves sounds like a pretty awful reason. I think Dusbiber (perhaps unwittingly) is overthinking this issue. Yet, with liberals, everything is political. That fetish of landing on the right side of history has placed Shakespeare in the crosshairs–at least with this teacher.

Luckily, not every English teacher feels the same way. Here’s Matthew Truesdale, an English teacher at Wren High School in Piedmont, South Carolina, on why it’s “ridiculous” not to teach Shakespeare:

But my complaint Dusbiber’s post is this: She argues that her students shouldn’t have to read Shakespeare because other literature “better speaks to the needs of my very ethnically-diverse and wonderfully curious modern-day students.” She then goes on to write that it might be “appropriate to acknowledge him as a chronicler of life as he saw it 450 years ago and leave it at that.”

So what Shakespeare wrote 450 years ago is not applicable to her teaching today? Ethnically diverse students don’t foolishly fall in love and over-dramatize every facet of that experience? Or feel jealousy or rage? Or fall victim to discrimination? Or act desperately out of passion? To dismiss Shakespeare on the grounds that life 450 years ago has no relation to life today is to dismiss every religious text, every piece of ancient mythology (Greek, African, Native American, etc.), and for that matter, everything that wasn’t written in whatever time defined as “NOW.” And yes– Shakespeare was in fact a white male. But look at the characters of Othello and Emila (among others), and you’ll see a humane, progressive, and even diverse portrayal of the complexities of race and gender.

If Ms. Dusbiber doesn’t want to teach Shakespeare or doesn’t like Shakespeare or thinks Shakespeare is too hard for her students, then fine…let that be her reasoning. Any teacher, myself included, has made decisions to switch out texts based on any number of factors.

What she really seems to be saying is that no one should read anything that isn’t just like them, and if that’s her position as an English teacher, then she should maybe consider a different line of work.

Valerie Struass, who blogs about education for the Post, added that Dusbiber’s opinion is actually shared by many. I’ve heard about the controversies surrounding Catcher in the Rye, Judy Bloom’s young adult works, The Adventures of Huckleberry Finn, and others, but Shakespeare? Granted, if they’re going to just read the emoji-based versions of his plays, then maybe there’s an argument for its removal, albeit still a weak one.