No Exaggeration: Brian Williams Will Return ... To MSNBC 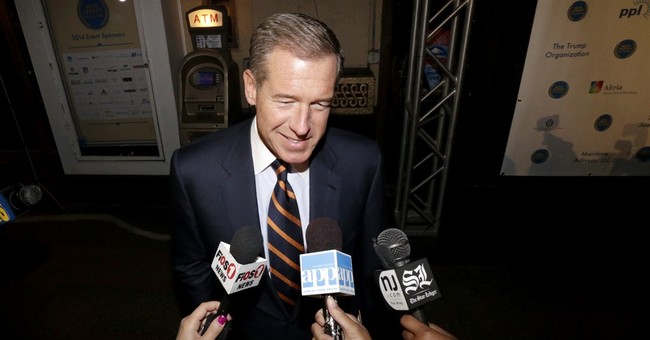 NBC’s Brian Williams will return to NBC News, but will not be retaking his anchor’s chair for Nightly News. The once most-watched evening news program has been reportedly holding steady in the ratings with substitute Lester Holt after a brief dive. He is set to become the permanent host. Williams was suspended for six months without pay for exaggerating a story when he was in the field covering the Iraq War in 2003. He claimed his Chinook helicopter was fired upon, eventually being struck by a rocket-propelled grenade. That turned out be to a gross exaggeration. The situation became even more embarrassing for the network when Williams’ 2005-2006 reports from New Orleans during Hurricane Katrina and Israel’s war with Lebanon, turned out to be flimsy on the facts as well.

Williams was once of the most trusted people in the limelight­. That’s no longer the case. Besides, losing the trust of his audience, Williams also had the NBC newsroom’s confidence shaken in him, according to the New York Times. The publication reports that Williams’ return to the network will be in a breaking news capacity ... for MSNBC:

NBC is planning to announce Thursday that Brian Williams will not return to his position as the anchor of its “Nightly News” show, four months after the network suspended him for exaggerating his role in a helicopter incident in Iraq, according to two people briefed on the discussions.

Mr. Williams is expected to move to a new role primarily at the cable news network MSNBC, probably in a breaking-news capacity in the beginning, according to one of the people.

Lester Holt, who has been filling in for Mr. Williams as anchor, will take on the position permanently, one person said.

NBC opened an investigation into Mr. Williams, and over the last several months it uncovered as many as 10 to 12 instances where he was thought to have exaggerated or fabricated accounts of his reporting, according to people familiar with the inquiry.

The controversy escalated to the very top of the corporation, with Stephen B. Burke, NBCUniversal’s chief executive, playing a crucial role in deciding Mr. William’s fate at NBC, according to people with knowledge of the deliberations.

Television industry executives said that it would have been difficult for Mr. Williams to return to the anchor chair because he lost the trust not only of viewers but also the people in NBC’s newsroom.

Finding an appropriate role for Mr. Williams at NBC posed a challenge, television executives said. Mr. Williams built a reputation as a master storyteller and news reader but wasn’t known for his interviewing skills or journalism chops.

Television executives said that NBC would stand to benefit by keeping Mr. Williams from going to a competitor and talking publicly about the controversy.

In the coming months, MSNBC is expected to introduce more hard news and more reporting from NBC News talent during daytime hours, which would be something of a break from its more opinion-based programming during the evening, according to a person briefed on the plans.

His departure from the anchor chair leaves NBC in an awkward position for the national newscast. In December, Mr. Williams, 55, signed a new five-year contract reportedly worth $10 million a year, and the network was not anticipating having to replace him so soon. No one in the news ranks was being groomed as a successor.

To the many on the right clamoring for Williams’ firing, or a quiet disappearance in a journalist-based Mandyville; that was probably never going to happen since Williams still draws an audience. Furthermore, as the Times noted, it prevents the competition from grabbing, which they would have done. He’s also the face of the network for goodness sake. We shouldn’t be shocked if Williams does fully recover from this ordeal.