Poll: 46 Percent Of Americans Want Stephanopoulos To Stay Away From 2016 Election Coverage 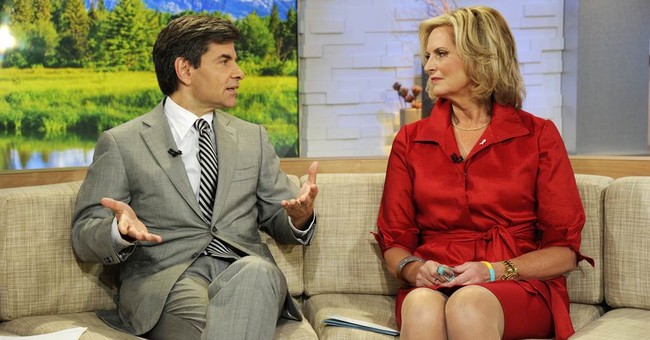 The revelation that ABC News’ George Stephanopoulos donated $75,000 to the Clinton Foundation, even serving as a featured attendee, panel moderator, and panelist at past Clinton Global Initiative annual meetings, confirms every speculation conservatives have about liberal media bias. As Julia Porterfield wrote in National Review, Conn Carroll, Sen. Mike Lee’s (R-UT) communications director, will not allow the senator go on ABC until Mr. Stephanopoulos recuses himself from all 2016 coverage. Oh, and 46 percent of Americans agree with that sentiment:

A new poll finds that 46 percent of Americans want ABC News chief anchor George Stephanopoulos banned from all 2016 campaign coverage following the revelation last week that he’d failed to disclose 75,000 in personal donations to the Clinton Foundation even as he continued to cover the recent controversy over the foundation’s foreign donors.

From May 17-18, Rasmussen Reports conducted a poll of 1,000 likely voters and found that a majority “think ABC should ban Stephanopoulos from any programming related to the presidential campaign since Hillary Clinton is running for president.” As a former staffer for President Bill Clinton, Stephanopoulos has close ties to the Clinton family that have prompted criticism of his reporting in recent years. The poll also found that 48 percent of Americans believe media bias to be “a bigger problem in politics today than big campaign contributions,” and 37 percent believe that “the average media reporter is more liberal than they are.”

At the same time, do we really need to have Stephanopoulos’ donations to the Clinton Foundation as the reason for his recusal from 2016 election coverage? He’s a former Clinton political operative; that alone should be reason enough to bar, or certainly scrutinize, any report he makes with regard to the Clintons on the campaign trail next year. Given ABC News’ shoddy response time to the Washington Free Beacon–ABC actually went to Dylan Byers of Politico–we shouldn’t expect them to remove Stephanopoulos from their campaign coverage.