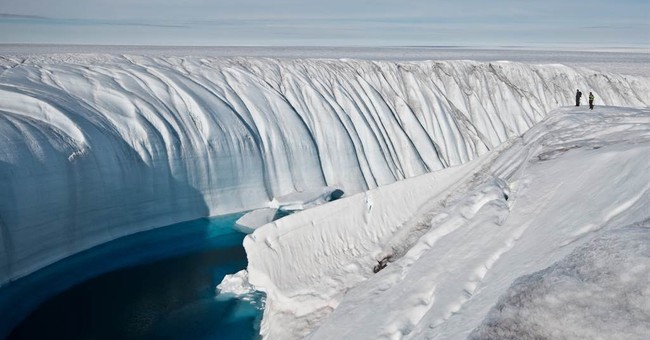 As I've written previously, we’ve experienced the calmest Hurricane season in 30 years, the quietest tornado season in 60 years; the creation of 19,000 Manhattan islands worth of sea ice, and (again) the Arctic Ice Cap has grown by 533,000 square miles. In 2007, the BBC warned the cap could vanish by 2013. Oh, and we’re at the most industrialized point in human history–and air quality couldn’t be better, according to the EPA.

Now, the polar ice caps aren’t melting. In fact, they haven’t retreated at all. James Taylor of the Heartland Institute wrote in Forbes that the 1979 baseline on polar ice recorded a figure with that was unusually high, so when some melted we didn’t really need to panic. Well, the green warriors of the world did, but the ice rebounded in 2012. Taylor wrote,“Ever since, the polar ice caps have been at a greater average extent than the post-1979 mean.” [emphasis mine]

Updated data from NASA satellite instruments reveal the Earth’s polar ice caps have not receded at all since the satellite instruments began measuring the ice caps in 1979. Since the end of 2012, moreover, total polar ice extent has largely remained above the post-1979 average. The updated data contradict one of the most frequently asserted global warming claims – that global warming is causing the polar ice caps to recede.

The timing of the 1979 NASA satellite instrument launch could not have been better for global warming alarmists. The late 1970s marked the end of a 30-year cooling trend. As a result, the polar ice caps were quite likely more extensive than they had been since at least the 1920s. Nevertheless, this abnormally extensive 1979 polar ice extent would appear to be the “normal” baseline when comparing post-1979 polar ice extent.

Updated NASA satellite data show the polar ice caps remained at approximately their 1979 extent until the middle of the last decade. Beginning in 2005, however, polar ice modestly receded for several years. By 2012, polar sea ice had receded by approximately 10 percent from 1979 measurements. (Total polar ice area – factoring in both sea and land ice – had receded by much less than 10 percent, but alarmists focused on the sea ice loss as “proof” of a global warming crisis.)

A 10-percent decline in polar sea ice is not very remarkable, especially considering the 1979 baseline was abnormally high anyway. Regardless, global warming activists and a compliant news media frequently and vociferously claimed the modest polar ice cap retreat was a sign of impending catastrophe. Al Gore even predicted the Arctic ice cap could completely disappear by 2014.

In late 2012, however, polar ice dramatically rebounded and quickly surpassed the post-1979 average. Ever since, the polar ice caps have been at a greater average extent than the post-1979 mean.

Now, in May 2015, the updated NASA data show polar sea ice is approximately 5 percent above the post-1979 average.

It’s been recently reported that there’s so much sea ice around Antarctica that vessels carrying scientists and supplies are having trouble reaching the research stations there. It appears global warming isn’t melting any polar ice in her ongoing campaign against earth and humanity. Additionally, she decided not to make 2014 the warmest year in history. Global warming, we are still waiting for you to kill us all.

Last week, President Obama said global warming is a threat to national security. So, why did the CIA shut down their climate research project?  As Leah wrote, this is pretty "awkward timing," and another example that this administration really doesn't know what's going on regarding threats to the country.  ISIS is pushing forward, China is upgrading their ballistic missiles, Yemen has fallen, the Iran nuclear deal is fraught with uncertainty.  Is anyone home?

Editor's note: James Taylor works for the Heartland Institute (still a great organization), not Forbes. The post has been updated to reflect the changes.