NASA: We're About 38 Percent Sure That 2014 Was The Warmest Year On Record 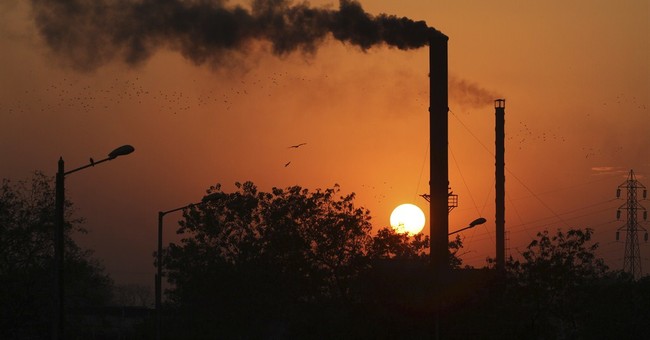 Earlier this month, it was reported that 2014 was the warmest on record; great odin’s raven! Can you hear the Tom Steyers of the world saying, “Look, look I told you global warming exists” within media circles. Well, as it turns out, the model NASA climate scientists used was, uh, kind of shoddy. And by shoddy, I mean they’re only 38 percent sure that their hypothesis about 2014’s weather is true (via Daily Mail):

The Nasa climate scientists who claimed 2014 set a new record for global warmth last night admitted they were only 38 per cent sure this was true.

In a press release on Friday, Nasa’s Goddard Institute for Space Studies (GISS) claimed its analysis of world temperatures showed ‘2014 was the warmest year on record’.

The claim made headlines around the world, but yesterday it emerged that GISS’s analysis – based on readings from more than 3,000 measuring stations worldwide – is subject to a margin of error. Nasa admits this means it is far from certain that 2014 set a record at all.

Yet the Nasa press release failed to mention this, as well as the fact that the alleged ‘record’ amounted to an increase over 2010, the previous ‘warmest year’, of just two-hundredths of a degree – or 0.02C. The margin of error is said by scientists to be approximately 0.1C – several times as much.

As a result, GISS’s director Gavin Schmidt has now admitted Nasa thinks the likelihood that 2014 was the warmest year since 1880 is just 38 per cent. However, when asked by this newspaper whether he regretted that the news release did not mention this, he did not respond. Another analysis, from the Berkeley Earth Surface Temperature (BEST) project, drawn from ten times as many measuring stations as GISS, concluded that if 2014 was a record year, it was by an even tinier amount.

In 2012, the UK Meteorological Office reported that global temperatures have virtually remained steady since 1997. So, global warming has pretty much stopped for nearly two decades.

The Arctic Ice Cap was supposed to disappear in 2013; it actually grew by 533,000 square miles.  We’ve seen the creation of 19,000 Manhattans worth of sea ice, the calmest Hurricane season in over three decades, the quietest tornado season in six decades, but don’t worry; global warming is real.

I think the jury is still out. And until then, no country should gamble on this hypothesis that could cost trillions of dollars. After all, in the 1970s, global cooling was the latest doomsday scenario disseminated by climatologists, who warned, amongst other things, about "extensive Northern Hemisphere glaciation," and the dismay they felt with world leaders who weren't taking measures to stockpile food.

It never happened. We survived.