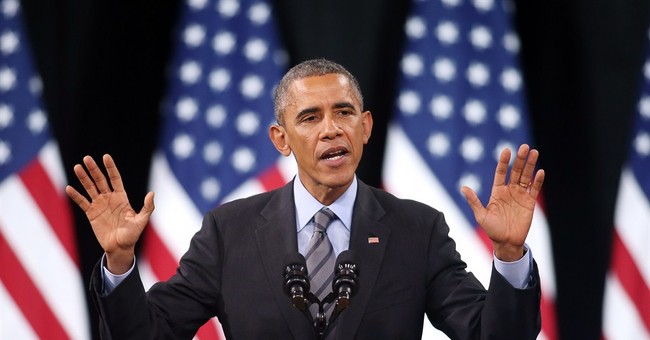 Americans are softening their positions on immigration - even Republicans. A new Associated Press-GfK  poll, which was conducted before Hillary announced that she’s for a pathway to citizenship–found that GOP voters want someone to reverse Obama’s executive action on immigration, but would also vote for someone to keep that policy in place. [emphasis mine]:

"This country has always had open doors," said Dean Talmadge, a Republican from suburban Seattle. "I don't just have a problem with immigration, as long as they are here, working and following the rules."

That's a sentiment shared by most Americans, who according to the poll, favor a path to citizenship by 53 to 44 percent. It did not make a significant difference if respondents were asked instead whether they supported a path to legal status short of citizenship: 50 percent said they favored it and 48 percent opposed.

In the poll, about 6 in 10 Americans and 4 in 10 Republicans support those key measures of the Obama policy. Americans overall were split about evenly on whether they would prefer to vote for a candidate who would keep or undo the executive action.

"I don't have a problem if they want to earn their citizenship while they are here," said Darlene Harmison, a Republican from Colfax, Iowa, a rural town east of Des Moines. "I'm not saying send them all back. But I do agree they need to speak English."

Three-quarters of Republicans in the poll say they would prefer to vote for a 2016 candidate who would undo Obama's immigration action — even more than the two-thirds of Republicans who say they oppose a path to citizenship or legal status.

So, is a pathway to citizenship still anathema to the Republican base? If you go back to 2013 polling–plenty of Republican voters supported it. Also, before liberals attack Ms. Harmison of Iowa for the “microaggression” of saying that new immigrants should learn English, let's not forget that over 70 percent of Americans believe it should be a requirement to gaining citizenship, along with passing a background check and paying back taxes (Public Religion Research Institute) [emphasis mine]:

Roughly 6-in-10 Republicans (60%) and independents (57%) and approximately 7-in- 10 (73%) Democrats favor a path to citizenship for immigrants currently living in the United States illegally.

When there is no mention of requirements that immigrants living in the country illegally must meet, nearly 6-in-10 (59%) Americans support a path to citizenship.

When the question mentions “certain requirements” that immigrants living in the country illegally must meet, nearly 7-in-10 (68%) Americans support a path to citizenship.

When the question references specific requirements such as paying back taxes, learning English, and passing a background check, 71% support a path to citizenship.

As for paying taxes, the illegal immigrants who file probably use an Individual Taxpayer Identification Number. Yet, that’s a debate for another time.

Yet, let’s be honest; Republicans have very, very different views on immigration. Nevertheless, the confusion over pathway to citizenship and legal status continues, albeit it's more of an even division amongst voters compared to polling from two years ago. In 2013, the Washington Post found that while a pathway to citizenship remains popular with Americans, legal status was not [emphasis mine]:

About six in 10 support a new pathway to citizenship for illegal immigrants, according to a new poll from NBC News and Wall Street Journal. And that number jumps to a whopping 74 percent if you qualify that the undocumented immigrants must take steps like paying back taxes.

The very same poll, though, also asked people whether they support legal status -- shy of citizenship -- for illegal immigrants. Support for this, somewhat amazingly, is just 39 percent, with 48 percent opposed.

In other words, huge majorities support a path to citizenship. But on a path to legal status, it's reversed.

If you're confused, you're not the only ones. So are the American people.

While polling has long shown a clear and strong majority of Americans support a path to citizenship, some recent polls have shown far less support for legal status. While the NBC/WSJ poll shows Americans oppose legal status 48-39, a Washington Post-ABC News poll in September showed Americans opposed legalization 50-46. That was little-changed from January, when the WaPo-ABC poll showed an even 49-49 split.

Why the support for citizenship but not legal status? Your guess is as good as ours.

Frankly, AP should conduct a new poll that specifically cites Hillary’s position, which is amnesty on steroids (via Allahpundit):

Hillary’s now promising to expand that by giving legal status to parents of DREAMers — who are themselves illegal immigrants. If kids brought here illegally by their parents qualify for legalization under Obama’s DACA amnesty and the parents of those kids qualify for legalization under President Hillary’s amnesty, then presumably any foreign citizen with a kid has a golden ticket to stay so long as they can make it across the border with their child. And since Hillary’s also strongly in favor of a path to citizenship for illegals who are already here, her trump card next year in out-pandering the GOP with Latino voters, it’s also presumably true that a mom and kid who’ve made it across will eventually become (Democratic) voters in due time. Makes me wonder how the next Democratic presidential nominee, in 2020 or 2024, will try to out-pander Obama and Clinton. The only move left is to offer legal status to all adult illegals, whether or not they have a kid. Open borders, just like those hysterical anti-amnesty nuts on the right always feared.

I’m sure this won’t resonate well with voters, but I could be wrong.  While the confusion between pathway to citizenship and legal status seems to be constant, the fact that Republicans–55 percent–would vote for a candidate who would keep Obama's immigration policies in place if they agreed on other issues is a bit surprising given how some are already writing Jeb Bush's 2016 epitaph.  Moreover, almost 50 percent of conservative Republicans could stomach voting for someone who would keep such policies in place. I guess the silver lining in all of this is that Hillary Clinton is uniting the Republican Party for next year's rumble.  Above all else, beating Clinton is a top priority–and if that Republican has the best chance of beating Hillary, but supports policies like a pathway to citizenship or keeping Obama's immigration policies; then by all means we must vote for that person in order to stop her.  That seems to be the sentiment in the AP poll.

The process is broken down into three stages: First, undocumented immigrants must apply for "Lawful Prospective Immigrant Status," which would allow them to work and travel outside the United States with some restrictions, but which would bar them from receiving any government benefits. Prospective immigrants would have to pay back taxes and prove they're pursuing a Education Department-approved course of study to learn English and an "understanding of the history and Government of the United States," according to the draft. They'd also have to apply to renew their provisional legal status every four years.

Second, those prospective immigrants must either wait eight years from when the comprehensive bill is passed or until the backlog of legal immigrants waiting for visas is cleared before being able to get a green card,"whichever comes earlier," explains Muzaffar Chishti, director of the Migration Policy Institute's office at NYU School of Law. Once they get a green card — which grants "legal permanent residence" — immigrants typically have to wait at least five more years to become naturalized citizens.

So, in total, qualified undocumented immigrants would likely have to wait at least 13 years to get full citizenship. Some pro-immigration advocates aren't happy about that wait.