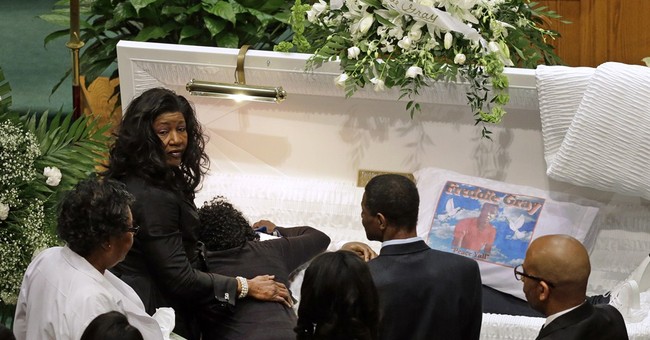 As Cortney reported earlier today, Marilyn Mosby–the state attorney for Baltimore–announced that she has filed several charges against the six police officers involved in the death of Freddie Gray after his April 12 arrest. Gray suffered a severe spinal injury, which eventually led to his death a week later; he had slipped into a coma. He wasn’t properly secured by a seat belt during transit, which is department policy–and did not receive the immediate medical attention.

After the police turned over their files on the case to prosecutors, Mosby brought forward the charges, including second-degree murder, involuntary manslaughter and misconduct in office.

We still have yet to verify what happened during that 45-minute Gray took in a police van that led to these egregious injuries. What we do know is that he did not sustain them from the various videos that captured his arrest. Sources have told WJLA–a CNN affiliate– that the medical examiner’s report showed that Gray's head injury occurred inside the van during transit (via WJLA):

An investigation into the death of Baltimore resident Freddie Gray has found no evidence that his fatal injuries were caused during his videotaped arrest and interaction with police officers, according to multiple law enforcement sources.

The sources spoke to ABC7 News after being briefed on the findings of a police report turned over to prosecutors on Thursday.

Sources said the medical examiner found Gray's catastrophic injury was caused when he slammed into the back of the police transport van, apparently breaking his neck; a head injury he sustained matches a bolt in the back of the van.

Details surrounding exactly what caused Gray to slam into the back of the van were unclear.

The officer driving the van has yet to give a statement to authorities. It’s also unclear whether Gray’s head injury was voluntary or was a result of some other action.

The Washington Post reported that the second person in the van heading to the police station with Gray alleged that he might have tried to hurt himself. Now, that story has been brought into question, as Donte Allen has come forward to say that he was the second detainee–and that there was relatively little banging from Gray in the van. He described the ride to the police station as a smooth ride (via NBC News):

A Baltimore man has come forward to talk about his April 12 ride in a police van with Freddie Gray, saying in an interview that he heard his fellow prisoner briefly making noise on the other side of a metal barrier.

Allen's account, given in an interview on the street with WBAL reporter Jayne Miller, differs slightly from the one described in a report in the Washington Post. Citing police documents, the newspaper quoted a prisoner telling investigators he could hear Gray "banging against the walls" and that he believed Gray "was intentionally trying to injure himself."

The quotes came from an application for a search warrant that was sealed by court order but provided to the newspaper under condition that the witness not be named. Allen appears to be that prisoner; police have said that only two prisoners were in the van during the April 12 ride through West Baltimore.

Asked if he told police that he heard Gray banging his head against the van, Allen provided WBAL with a conflicting reply: "I told homicide that. I don't work for the police. I didn't tell the police nothing."

Even with Allen's account, it remains unclear what Gray was doing on the other side of the partition. Sources have told WBAL that Gray was unconscious by the time that Allen was loaded inside.

Slowly, but surely, we’re finding out what happened to Mr. Gray during those 45 minutes.