New Report Lists 601 Ways To Save $2.6 Trillion Over Five Years 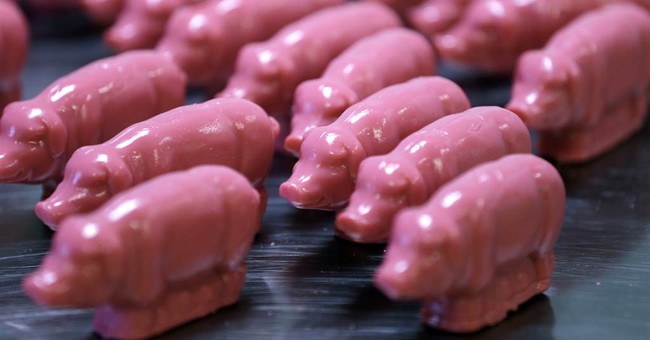 We all know government waste is a problem. Then-Sen. Tom Coburn (R-OK) published an annual Wastebook report to highlight absurd government spending during his time in the Senate. Now, Citizens Against Government Waste (CAGW) has released their Prime Cuts report for 2015, highlighting 601 programs that are costing the U.S. billions of dollars a year. According to their press release, if Congress were to adhere to their 601 recommendations, it would save taxpayers $639 billion in the first year alone and $2.6 trillion over five years.

There are also no “scared cows” in their report; everything is put in the fiscal crosshairs. With a national debt of $18.2 trillion and climbing, everything should be discussed, which could draw some raised eyebrows from conservatives over defense. Here are some of the biggest slices of pork:

The Rural Electrification Administration (REA) was established in 1935 to bring electricity to America’s rural communities. By 1981, 98.7 percent electrification and 95 percent telephone service coverage was achieved. Rather than declaring victory and shutting down the REA, the agency was transformed into the Rural Utilities Service (RUS) in 1994, and then expanded to provide loans and grants for other utilities including telephone service to underserved areas of the country. That mission was further expanded under the 2002 Farm Bill to provide broadband services to unserved or underserved rural areas, which are generally defined as communities with populations of less than 20,000. These services are provided in part through the Rural Broadband Access Loan and Loan Guarantee Program (BAP).

Some of the BAP’s wasteful projects include the $667,120 given to Buford Communications of LaGrange, Arkansas (population 122) in 2009 to build a hybrid fiber coax network and a new community center. This equates to $5,468 per resident of LaGrange.

Another RUS program that has been rife with waste is the Water and Waste Disposal System Loans and Grants Program (WWD), which was intended to improve quality of life and create jobs in rural communities. According to a

July 2012 Department of Agriculture Inspector General (IG) report, “as of September 30, 2011, RUS had obligated $3.3 billion in grants and loans to fund 854 WWD projects throughout the United States.” Only three of the

22 projects examined by the IG were completed on time, and the majority of the projects were started five to 30 months after the funds were obligated. The RUS created only 415 new jobs through the WWD, which is “less than 20 percent of the actual jobs identified in planning estimates.”

Over the objections of senior DOD officials, members of Congress have for many years been earmarking funds for the M1 Abrams tank retrofit program. In his testimony before the House Armed Services Committee (HASC) on February 17, 2012, Army Chief of Staff General Raymond Odierno said that the U.S. possesses more than enough tanks to meet the country’s needs. In fact, the Army has so many M1 tanks that 2,000 of them are parked

in a California desert.

The army intended to retrofit the remainder of the 2,384 M1 tanks it needed by the end of 2013, after which it would delay the upgrade program until 2017, saving taxpayers $3 billion. During this timeframe, the DOD would focus on designing the next generation of tanks, which would be better equipped for the changing nature of warfare. Intended to take on other tanks, the M1 Abrams proved susceptible to asymmetric tactics such as improvised explosive devices employed by insurgents in Iraq and Afghanistan. General Odierno stated that warfare has changed: “...we don’t believe we will ever see a straight conventional conflict again in the future.”

Unfortunately, members of Congress have different ideas. On April 20, 2012,
a bipartisan letter insisting on the continuation of the program from 173 representatives reached the desk of Secretary of Defense Leon Panetta. Although the main tank plant is located in Lima, Ohio, suppliers are spread across the country, which helps to explain the extensive support.

The FY 2015 DOD Appropriations Act contained a $120 million earmark for the program, and hinted at a parochial incentive for continuing the program, stating that the funding will be used to “maintain [the] critical industrial base.” There’s nothing like a good old-fashioned jobs program disguised as national security. Since FY 1994, there have been 38 earmarks for the M1 Abrams program, requested by at least 13 members of Congress, costing taxpayers $906.6 million. As Congress continues to ignore the DOD, taxpayers will continue to foot the bill for modifications to what Gen. Odierno described as “280 tanks that we simply do not need.”

Medicare is plagued with the highest reported amount of improper payments of any federal program. According to the Centers for Medicare and Medicaid Services’ (CMS) FY 2014 Comprehensive Error Rate Testing Report, the improper payment rate was 12.7 percent and the improper payment amount was $46 billion. Because of its chronic vulnerability to fraud, waste, abuse, and mismanagement, GAO has for 20 years designated the Medicare program as “high risk.”

In a bipartisan effort to reduce improper payments and help stave off the impending bankruptcy of the Medicare Trust Fund, Congress first implemented a Recovery Audit Contractor (RAC) demonstration project for Medicare Parts A and B that ran from 2005 to 2008 and recovered more than $900 million in overpayments to providers. Congress enacted legislation to expand the program nationwide and make it permanent, a process that began in early 2009 and was fully implemented by September 2010.

In 2010, Congress further expanded the scope of RACs in the Affordable Care Act to include auditing for Medicare Parts C and D. The legislation also required states and territories to establish RAC programs for Medicaid, noting that the RAC program was a proven, valuable tool in reducing improper payments.

Since the beginning of the RAC program, $9.7 billion has been returned to
the Medicare Trust Fund. In FY 2013 alone, RACs collected $3.65 billion, according to the Medicare Trustees’ report to Congress on the program. Only $57.6 million of that amount, or 1.6 percent, was overturned at the first level of appeal. In addition, only 9.3 percent of all claims that reached the top level of appeal to administrative law judges were overturned in FY 2013.

RACs have an average accuracy rate of 96 percent, which makes them far and away the most successful tool Congress has ever implemented to protect taxpayers and Medicare beneficiaries from rampant improper payments.

The populations that receive Medicare and Social Security are identical; thus, it makes sense that the eligibility age for each should be raised simultaneously. Medicare alone is expected to cost more than $1 trillion annually by 2020 and will become insolvent by 2030. The 2014 Medicare Trustees Report projects Medicare spending as a percentage of the economy to increase from 3.4 percent in 2014 to 6.3 percent in 2085.

Under current law, Medicare recipients can begin collecting benefits at the age of 65.

According to a March 10, 2011, CBO report, using 2017 as the starting point to increase Medicare’s eligibility age by two months annually until it reaches 67 would reduce Medicare costs by 10 percent by 2035. It would reduce federal spending by $124.8 billion over the next 10 years. As life expectancies (happily) keep growing, raising the eligibility age is likely to be the easiest, least controversial method of reining in Medicare costs.

Other recommendations include privatizing the U.S. Postal Service, which has been running at a loss of $10.5 billion over the past two years; minting $1 coins to replace printing $1 bills, which would save $146 million in the first year and $730 million over five years; and privatizing Fannie Mae and Freddie Mac, which would save $1.5 billion in the first year and $6.7 billion over the next five.

Out west, voters and politicians will probably like CAGW’s suggestion that the federal government should stop buying land.

Corporate welfare, peanut, dairy, and sugar subsidies are also placed on the chopping block. Corporate welfare may find some bipartisan support, but the subsidies will be an obstacle. Just look at the agriculture lobby and their defense on sugar subsides, which was detailed by Newt Gingrich during his presidential campaign in 2012 (via NYT):

Asked during a debate in Florida whether he favored sugar industry subsidies, Mr. Gingrich said that “one of the fascinating things about America” was how “cane sugar hides behind beet sugar,” and he went on to explain: “There are just too many beet sugar districts in the United States. It’s an amazing side story.”

As the Star Tribune wrote last year, the lobby has given over a million dollars to over 100 House and Senate candidates, along with spending another million spent on lobbying. Who knew the sugar lobby rivaled that  of big business and banks in influence:

American Crystal Sugar has become one of the country's most powerful lobbying groups, doling out cash contributions to lawmakers at levels approaching big-business groups like the American Bankers Association. And it's all for a single objective: To guarantee tariffs and price supports allow sugar beet farmers to make money, even if it drives the cost of sugar above the global market.

“In an ideal world, you would have an open market …," Gingrich said. "But it`s very hard to imagine how you`re going to get there … The capacity of the agricultural groups to defend themselves is pretty amazing.”

So, while CAGW’s report is a great blueprint for putting government on a diet, there’s the special interests, and other machinations of government, that will make gutting and cutting the pig into nicely sliced “prime cuts” difficult. Still, we should all accept that challenge.