Hypocrisy Alert: That Time Sen. Clinton Said The Bush Administration Might Have ‘Something To Hide’ By Refusing To Turn Over Documents 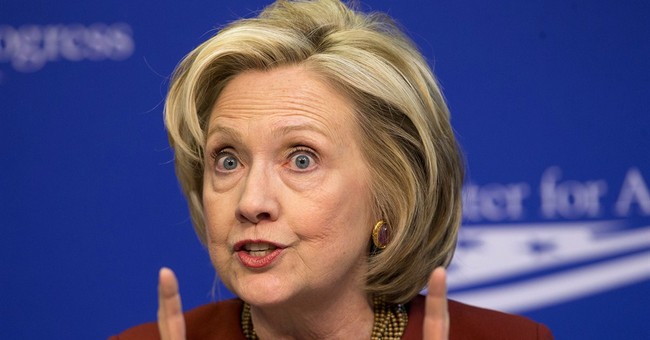 We all know Hillary Clinton used a private email address and server for official business when she was Secretary of State. She said she turned over her work-related emails to State, and deleted the ones she deemed personal. Her lawyers said they wouldn’t honor the request by Rep. Trey Gowdy (R-SC), chairman of the House Select Committee on Benghazi, to turn over the server to an independent arbiter for review, and that it’s been wiped clean, along with any back up systems connected to the server.

This private email scandal has been a nightmare for the Clinton team since it has rehashed all the negative things people associate with them, and elicits questions about transparency. Clinton has said she has gone above and beyond what has been asked over her regarding turning over her work-related emails to the State Department, citing that she used that private email address out of convenience because she didn’t want to use two devices; a claim that Gawker’s John Cook said was “preposterous.” Cook described Clinton’s email setup as “Nixonian.”

This is all the more interesting given that then-Sen. Hillary Clinton criticized the Bush administration in October of 2003 for refusing to turn over documents to the 9/11 Commission chaired by former New Jersey Governor Thomas Kean.

In her remarks at the Center for American Progress’ New American Strategies for Security and Peace Conference, then-Sen. Clinton touched upon America’s war on terror, criticized the Bush doctrine, and the lack of transparency exuded by the Bush administration during the 9/11 Commission’s investigation into those horrific terror attacks [emphasis mine]:

I feel absolutely without doubt that our citizens, particularly my constituents, deserve to know all the facts of how the government was prepared or not. Yet, over this weekend, we learned that the 9/11 commission, an independent commission, charged with the important task of investigating how 9/11 happened, complains that it is not getting access to all the documents it needs.

This is a hugely important issue. And it’s not just important for this commission, but for these larger questions about access to information and how this government maintains the trust of the American people.

The lack of transparency on the part of the Bush administration has forced Governor King [sic; it’s Kean], former Republican Governor of New Jersey, to threaten subpoenas. This should not be happening.

As bad as it was for Vice President Cheney to keep secret how the administration developed its energy policy, this is far worse. The 9/11 commission is not trying to embarrass this president or any former president or anyone else. It is trying to learn what happened, what went wrong. In hopes that we can be better prepared to protect ourselves from any future attacks.

In taking their action to evade or avoid providing information, the administration unnecessarily raises the suspicion that it has something to hide, that it might use the claim of national security to hide mistakes that are literally questions of life and death for Americans.

As mentioned in her remarks, Gov. Kean was ready to issue subpoenas over documents the commission felt were being withheld. At the time, the Bush administration turned over 2 million pages of documents to the commission, and President Bush and Vice President Dick Cheney would have a three-hour session with 10 members of the investigatory board. Critics will certainly mention that Bush and Cheney were not under oath during this session, and that no official record exists since no stenographers were allowed to participate in the meeting. The commission would say the session was “forthcoming and candid;” two things that cannot be said about Clinton and her history of secrecy.  Also, even James Carville mentioned that her email system appears to be set up to avoid congressional oversight, the man who ran point on implementing FOIA throughout the executive branch–Dan Metcalfe–noted that her email was set up to avoid such requests.

As Rep. Gowdy noted in his statement, Hillary decided to wipe her hard drive sometime after October 28, 2014 when the State Department asked for her public record of service. The committee issued the subpoena for the emails relating to Libya on March 4; Clinton’s lawyer sent a letter on the status of the server on March 27.

Just to note: Clinton's emails were under subpoena when she destroyed them.

RNC Chairman Reince Priebus aptly noted that even Nixon didn’t destroy the tapes. It appears Hillary destroyed those emails while under a subpoena; a point that threw the Meet The Press roundtable into “chaos” over the weekend.

Yes, Mrs. Clinton turned over emails, which they say was done after reading all of them, despite this statement coming after Time reported that her lawyers only used a keyword search to conduct their review.  If they read every email, then why hit "Control + F?"

Lastly, in the interests of transparency, a State Department Inspector General might have been able to catch the private email address Clinton was using during her tenure as Secretary of State. The problem is that there wasn't a permanent IG the entire time she was there.