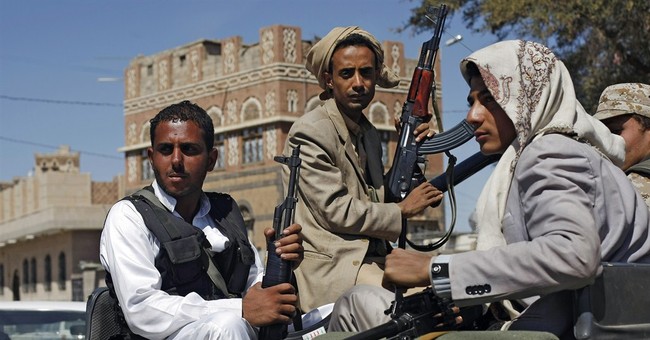 Apparently, some files with sensitive intelligence, including names and locations of informants in Yemen, might have been compromised as the Houthi rebels continue their campaign to consolidate power. With the loss of our intelligence networks, the U.S. halted drone strikes, evacuated the embassy, and withdrew the last contingent of Special Operations forces. Yemeni intelligence officers were able to destroy some of the sensitive documents, but were unable to get all of them with the rapidly approaching Houthi forces (via LA Times):

U.S. intelligence officials believe additional files were handed directly to Iranian advisors by Yemeni officials who have sided with the Houthi militias that seized control of the capital of Sana last September and later toppled the U.S.-backed president.

For American intelligence networks in Yemen, the damage has been severe.

But U.S. officials also worried Wednesday about the loss of the Yemeni intelligence files, including the names and locations of agents and informants with information on Al Qaeda in the Arabian Peninsula [AQAP], considered the terrorist network’s most dangerous and resourceful branch.

There was no indication that the Houthis had gained direct control of U.S. intelligence files, so the loss doesn’t compare to more infamous cases, like the takeover by militants of the U.S. Embassy in Tehran in 1979 or the U.S. retreat from Saigon in 1975.

The U.S. still plans to fly armed drones over Yemen from bases in Saudi Arabia and Djibouti, but officials acknowledged that their ability to identify and locate terrorist suspects has been severely hampered by the loss of the intelligence files, and the collapse of Yemen’s security services.

The article also noted that AQAP might exploit the chaos to re-establish itself in Yemen since the United States can no longer efficiently unleash its silent fury from its drone campaign. They might also ally themselves with fellow Sunnis in Yemen eager to stop the advance of the Shiite Houthi rebels.

Again, have no fear because the Obama administration thinks we’ve “succeeded” in Yemen, which elicited this response from ABC News’ Jonathan Karl –“That’s astounding.”

JONATHAN KARL, ABC NEWS: I know you're asked this every time something terrible happens in Yemen, but now that we have essentially complete chaos in Yemen, does the White House still believe that Yemen is the model for a counter-terrorism strategy?

JOSH EARNEST, WHITE HOUSE: Jon, the White House does continue to believe that a successful counter-terrorism strategy is one that will build up the capacity of the central government to have local fighters on the ground to take the fight to extremists in their own country...

KARL: That's astounding. You're saying that you still see Yemen as the model, that building up the central government which has now collapsed, a president who has apparently fled the country, Saudi troops have amassed on one boarder, the Iranians supporting the rebels. You consider this as a model for counter-terrorism?

EARNEST: Again, Jon, what the United States considers to be our strategy when confronting the effort to try to mitigate the threat that is posed by extremists is to prevent them from establishing a safe haven. And certainly in a chaotic, dangerous situation like in Yemen, what the United States will do and has done is work to try to support the central government, build up the capacity of local fighters, and use our own technological and military capabilities to apply pressure on the extremists there.

Look -- I -- there's no doubt that we would like to see a functioning central government in Yemen -- we don't see that right now -- and that is why we are supportive of the U.N.-led process to try to put an end to the violence and instability.

BREAKING: Saudi ambassador: To have Yemen fail 'is not an option for us'