Obama: I’m ‘Embarrassed’ For Those 47 Senators Who Sent That Letter to Iran 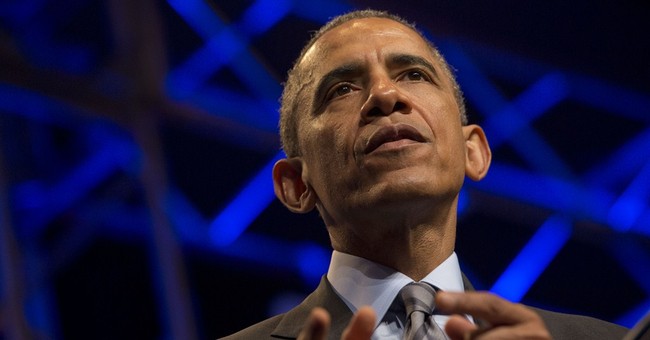 In an upcoming interview with Vice News, President Obama said he was “embarrassed” for Sen. Tom Cotton (R-AR)–and other Senate Republicans–who signed a letter to Iran, warning that “the next president could revoke such an executive agreement with the stroke of a pen” (via NPR):

President Obama said he's "embarrassed" for the 47 Republican senators who tried to undercut nuclear talks with Iran by writing a letter directly to the Iranian leadership.

"For them to address a letter to the Ayatollah, who they claim is our mortal enemy, and their basic argument to them is, 'Don't deal with our president because you can't trust him to follow through on an agreement,' that's close to unprecedented," Obama said in an interview with Vice News.

The youth-oriented news outlet released an excerpt of the interview on Friday. The full conversation is to be released Monday.

First, the letter by Sen. Cotton doesn’t say you can’t trust the president. It details the functions of our constitutional system, how Congress ratifies treaties, and term limits for the president and members of the Senate. It does say, “Anything not approved by Congress is a mere executive agreement.” Hence, the next president and stroke of pen references towards the end of the letter.

Also, let’s not forget that President Obama also sent a letter to Ayatollah Khameni about fighting ISIS last November. Oh, and it was a secret letter (via WSJ):

President Barack Obama secretly wrote to Iran’s Supreme Leader Ayatollah Ali Khamenei in the middle of last month and described a shared interest in fighting Islamic State militants in Iraq and Syria, according to people briefed on the correspondence.

The letter appeared aimed both at buttressing the campaign against Islamic State and nudging Iran’s religious leader closer to a nuclear deal.

Mr. Obama stressed to Mr. Khamenei that any cooperation on Islamic State was largely contingent on Iran reaching a comprehensive agreement with global powers on the future of Tehran’s nuclear program by a Nov. 24 diplomatic deadline, the same people say.

Moreover, Tim Mak over at the Daily Beast wrote that the Obama administration may have fallen into a Republican trap over the letter; they had to admit any deal with Iran would be non-binding:

The Obama administration was so outraged with the Republican attempt to undercut the president’s foreign policy negotiations that it sent the Vice President, the White House press secretary, and others to attack the letter rather seriously—instead of treating as the “cheeky” reminder of Congress’ role that GOP senators intended.

In the process of engaging, the Obama administration highlighted that any deal with Iran would be, like many other past international security initiatives, a “non-binding” agreement. And by taking this bait, the administration undercut its own credibility in making longer-term assurances about American sanctions relief.

“A non-binding agreement with Iran is easier to make (because the President can clearly do it on his own) and easier to break (because there is no domestic or international legal obstacle to breaking it),” wrote Jack Goldsmith, a former Assistant Attorney General who now teaches law at Harvard, at Lawfare on Wednesday.

Some Republicans thought twice about whether the open Iran letter was a needless agitation that hurts bipartisan Congressional efforts to prevent a bad nuclear deal.

But several days after its release, the effect of the open letter has been to clarify how precarious a deal with Iran could be after January 2017.

This raises questions about the durability of a deal that President Obama has said could have Iran agreeing to roll back its nuclear capabilities “for 10 years or longer.”

Whatever you may feel about the letter, it certainly wasn't a communiqué telling Iran to distrust president. Now, was it violation of the Logan Act?  First, it's an old law; it was enacted in 1799. It's constitutionally questionable, and the text suggests that what Sen. Cotton did wasn't a violation.  But, besides all that, the DOJ isn't going to prosecute 47 members of the Senate, which makes this whole debate over this very arcane law nonsensical. In fact, the last time the Logan Act was used in a serious legal manner was in 1803.