It’s Over: Danish Police Kill Suspect They Say Is Responsible For The Copenhagen Shootings 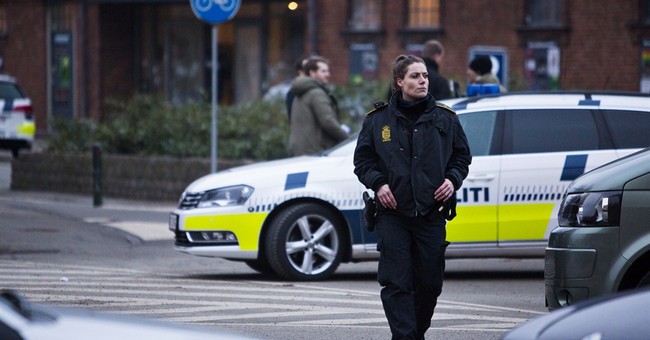 To foreigners, here's a map of the #cphshooting. Green dot is Krudttønden. Red dot is the synagogue in Krystalgade. pic.twitter.com/vsoMxzWxDH

To recap, Lars Vilks, a Danish cartoonist, had organized a free speech event at a café called Krudttønden.  A gunman proceeded to open fire during the seminar.  You can hear the shots being fired at during the event in this chilling audio clip. One man was killed in the attack; three police officers were wounded. A few hours later, shots were fired at a synagogue not far from the café. One victim was shot in the head and later died; two officers were wounded in the leg and arm. The second shooting was confirmed by Danish national police and ordered residents in Central Copenhagen to stay indoors, while the manhunt for the shooter began. The city was pretty much blocked off; no one was leaving.

Looks like these suspects won't get anywhere. Police in Denmark have blocked all ways of getting out @TheYellowPete pic.twitter.com/a5A4gF9EFq

Danish police are now stating that they're not looking for two suspects after the #cphshooting but only one.

Now, Danish police killed a man who they think is responsible for both attacks in the Norrebro district after he opened fire on them, according to the BBC [emphasis mine]:

BREAKING: Police say man killed by police believed to be gunman behind 2 shootings in Copenhagen

Police in Copenhagen say they have shot dead a man they believe was behind two deadly attacks in the Danish capital hours earlier.

Police say they killed the man in the Norrebro district after he opened fire on them.

It came after one person was killed and two injured during a free speech debate in a cafe on Saturday.

In the second attack, a Jewish man was killed and two police officers wounded near the city's main synagogue.

Police say they do not believe any other people were involved in the attacks.

The BBC's Malcolm Brabant in Copenhagen says the city has been on high alert after the shootings.

Early on Sunday, police said they had been keeping an address under observation in the district of Norrebro, waiting for the occupant to return.

When he appeared, he noticed the officers, pulled out a gun and opened fire, police said. They returned fire and shot him dead.

Norrebro is a predominantly immigrant district of Copenhagen, about three miles (5km) away from the synagogue where the shooting took place just hours earlier.

This harrowing ordeal appears to be over.