Confirmed: The Rolling Stone UVA Story Is An Unmitigated Disaster 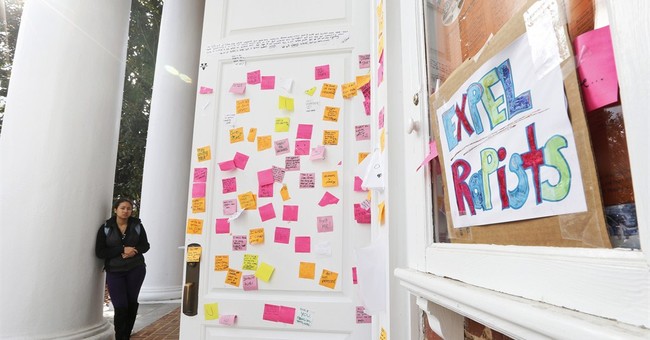 Yes, this was already self-evident with the shoddy journalism practiced by Rolling Stone’s Sabrina Rubin Erdely, who wrote the controversial piece about the alleged gang rape of Jackie at a party hosted by Phi Kappa Psi. Then again, she never gave the name of a specific fraternity according to her three friends “Randall,” “Andy,” and “Cindy,” who were portrayed as “callously apathetic” in the RS piece; details that they dispute.

Jackie told them that she had been forced to perform oral sex on five men. While not at all close to what was reported in the RS article, this is still rape.

The three friends agreed to talk to the Post on the condition that they keep their aliases used in the RS piece due to the publicity of this case–and give their side of the story (via WaPo):

“It didn’t happen that way at all,” Andy said.

Instead, the friends remember being shocked. Although they did not notice any blood or visible injuries, they said they immediately urged Jackie to speak to police and insisted that they find her help. Instead, they said, Jackie declined and asked to be taken back to her dorm room. They went with her — two said they spent the night — seeking to comfort Jackie in what appeared to be a moment of extreme turmoil.

“I mean, obviously, we were very concerned for her,” Andy said. “We tried to be as supportive as we could be.”

They said there are mounting inconsistencies with the original narrative in the magazine. The students also expressed suspicions about Jackie’s allegations from that night. They said the name she provided as that of her date did not match anyone at the university, and U-Va. officials confirmed to The Post that no one by that name has attended the school.

Also, photographs that were texted to one of the friends showing her date that night were actually pictures depicting one of Jackie’s high school classmates in Northern Virginia. That man, now a junior at a university in another state, confirmed that the photographs were of him and said he barely knew Jackie and hasn’t been to Charlottesville for at least six years.

The friends said they were never contacted or interviewed by the pop culture magazine’s reporters or editors. Although vilified in the article as coldly indifferent to Jackie’s ordeal, the students said they cared deeply about their friend’s well-being and safety. Randall said that they made every effort to help Jackie that night.

“She had very clearly just experienced a horrific trauma,” Randall said. “I had never seen anybody acting like she was on that night before, and I really hope I never have to again. . . . If she was acting on the night of Sept. 28, 2012, then she deserves an Oscar.”

In this new account, Jackie’s friends said she went on a date with someone in her chemistry class. In the Rolling Stone piece, it was someone she met during her lifeguarding job.

“Randall” told the Post that he struck a friendship with Jackie, and that she wanted to be more serious in that regard; he wasn’t interested. The three friends soon discovered that Jackie might have caught the eye of a junior in his chemistry class; he asked her out on September 28, 2012 (the night of the attack). Her friends, interested in who this person could be, exchanged texts with this mystery man after obtaining his number from Jackie:

In the text messages, the student wrote that he was jealous that another student had apparently won Jackie’s attention.

“Get this she said she likes some other 1st year guy who dosnt [sic] like her and turned her down but she wont date me cause she likes him,” the chemistry student wrote. “She cant turn my down fro some nerd 1st yr. she said this kid is smart and funny and worth it.”

That first year presumably being “Randall.” The article also noted that when Jackie told her story to Emily Renda, a 2014 UVA graduate who was raped and now serves as a sexual violence specialist at her alma mater, she noticed how the number of attackers in Jackie’s account went from five to seven.

Additionally, Phi Kappa Psi, the frat in question, held no social event on the night of Jackie’s alleged attack (Sept. 28, 2012).

Recently, ABC News did an interview with the three friends, who revealed their real names as Alex Stock (“Andy”), Kathryn Hendley (“Cindy”), and Ryan (Randall); Ryan asked that ABC News withhold his last name.  As previously mentioned, they strongly disagree with RS's account of their interaction with Jackie on the night of the alleged assault–and said it was Jackie who decided not to go to the police.

Jackie also named one of her alleged attackers:

Last week, for the first time, Jackie revealed a name of her main alleged attacker to other friends who had known her more recently, those recent friends said. That name was different from the name she gave Andy, Cindy and Randall that first night. All three said that they had never heard the second name before learning it from a reporter.

On Friday, The Post interviewed a man whose name is similar to the second one Jackie used for her main attacker. He said that although he was a lifeguard at the same time as Jackie, he had never met her in person and never taken her out on a date. He also said that he was not a member of Phi Kappa Psi.

Hanna Rosin over at Slate–a Washington Post-affiliated site–wrote about these new revelations regarding the name of Jackie’s date and the text messages, saying Erdely is either “gullible” or guilty of “active wrongdoing” [emphasis mine]:

The Post story doesn’t connect all the dots, but it’s not hard to do. Jackie has now given her friends two different names for the man she was with that night. Neither of them was in fact with her, ever dated her, or even knew her all that well. She appears to have invented a suitor, complete with fake text messages and a fake photo, which suggests a capacity for somewhat elaborate deception. Jackie, though, has not recanted her story. Her attorney would not answer questions for the Post's story on Wednesday and has told reporters to stop contacting Jackie.

Here's the most disturbing journalistic detail to emerge from the Post's reporting: In the Rolling Stone story, Erdely says that she contacted Randall, but he declined to be interviewed, “citing his loyalty to his own frat.” Randall told the Post he was never contacted by Erdely and would have been happy to be interviewed.

That could mean one of two things: Jackie could have given Erdely fake contact information for Randall and then posed as Randall herself, sending the reporter that email in which he supposedly declined to participate in the story. Erdely also could have lied about trying to contact Randall. Rolling Stone might have hinted at this possibility in its “Note to Our Readers” when it referred to a “friend of Jackie’s (who we were told would not speak to Rolling Stone)" but later spoke to the Washington Post. That would take Erdely a big step beyond just being gullible and failing to check her facts, moving this piece in the direction of active wrongdoing.

By now, we can safely say that this RS story is an absolute disaster.

Nevertheless, forced oral sex is rape, according to FBI guidelines. So, it seems that the gang rape itself is at least probable. Yet, the notion of being gang raped on a broken glass table in a darkened room by seven guys might have been an overly sensational recollection on behalf of the Rolling Stone. At the same time, Jackie–as far as I can see–has stood by her story.

Who’s at fault? We’ll have to see what happens as this train wreck continues, but there seems to be a logical case to be made for Erdely and Sean Woods, who edited the story, to lose their jobs. In fact, Cortney wrote earlier today how the infamous New Republic fabricator Stephen Glass chastised Erdely when she wrote for UPenn’s newspaper.

Regardless, rape is a serious issue; it’s a horrific crime that should be taken seriously. Yet, you don’t do any justice when it comes to addressing this issue when you fail to check your sources, dates, facts, and times.

Jackie might have been gang raped by being forced to perform oral sex. Though that possible scintilla of truth is most likely lost thanks to the RS fallout. This story isn’t about rape apologists, the dreaded patriarchy, or rape hoaxes (rape isn't a hoax); it’s about bad journalism.

UPDATE: I found the video and it's been embedded in the post.  Also, I forgot to add this tidbit from ABC," The [Rolling Stone] article describes Jackie sinking into depression after the alleged rape, and holing up in her dorm room. Not so, say her friends, who told ABC News she seemed fine after the alleged assault."

Again, this is just awful journalism.

P.S. We’re not immune from mistakes; we all make them. Here’s my latest foul up on the Cromnibus. Yet, as my colleague Guy has said before, the point is to own it immediately, which is something that Rolling Stone also botched.