John Barrow: One Of The Last White Democrats From The Deep South 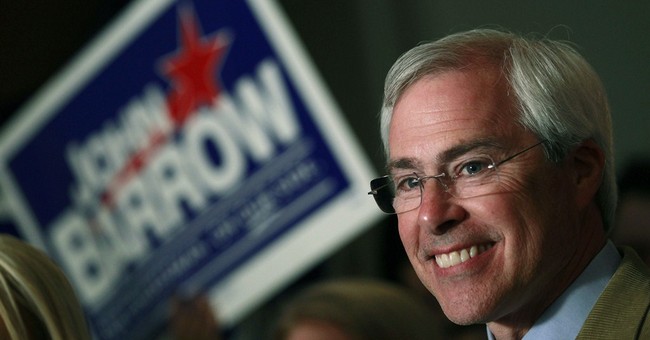 Editor's note: I forgot to mention Sen. Mary Landrieu of Louisiana, who went down in defeat in the Dec. 6 runoff, at the time of this post's publication.  So, let me offer a correction: Barrow is one of the last, not THE LAST, white Democrat to be voted out of the Deep South now that Landrieu was sent packing. Regardless if her defeat was inevitable, the runoff election in Louisiana hadn't happened at the time. The headline was inaccurate, I jumped the gun, and I apologize. I've changed the headline to reflect the corrections.  We should also note that Sen. Bill Nelson still represents Florida.

In Georgia, soon-to-be former Rep. John Barrow was something of an anomaly; he’s one of the last white southern Democrats from the Deep South (Mary Landrieu probably won't survive the Dec. 6 runoff). Elected in 2004, Barrow survived many Republican attempts to unseat him, mainly due to the fact that the GOP had abysmal candidate recruitment.

According to James Richardson of Georgia Tipsheet, he was moderate enough to keep conservative voters at bay, but not so much that he would depress Democratic turnout in his district. This, coupled with poor Republican candidates, had enabled him to survive 10 years in the South. Then again, he seemed to have blown with the political winds:

He was at times both an ally and annoyance to President Obama. In 2009, as Republican advertisements this year repeated ad nauseam, he “voted with Obama 85 percent of the time.” But in 2011 that measure of political affinity had fallen to 59 percent; in 2012, when he crossed the aisle to support a congressional censure of Attorney General Eric Holder, it had dropped to just 35 percent.

Even as Mitt Romney carried the district by 12 points in the last presidential contest, he coasted to an easy 8-point victory over then-state Rep. Lee Anderson.

In 2010, the Augusta Chronicle’s editorial board skewered Barrow’s “duplicitous” behavior after mailers from his campaign showed one saying he stands with Obama, while the other says he stood up against then-Speaker Nancy Pelosi [emphasis mine]:

Georgia Congressman John Barrow has revealed himself to be perhaps the most shameless, duplicitous, self-serving politician of his era.

Those in the know have long realized the 12th District representative has voted as a supposed "Blue Dog" moderate Democrat primarily as a means of survival in a largely conservative district. On major issues in which the Democratic leadership in Washington is pushing the country to the far left, Barrow has waited until the coast is clear -- in other words, until it's clear the Democrats have enough votes without him -- before voting against his party, in order to look good back home.

The Savannah Morning News -- which actually had endorsed him -- now reports that Barrow sent diametrically opposed mailers to different voters in the district saying, in one mailer, that he works "hand-in-hand" with Barack Obama -- and in the other one that he has "stood up to (House Speaker) Nancy Pelosi and the Democrats in Washington."

The Savannah paper also notes Barrow is running an ad of Obama endorsing him -- but just on radio stations that target black audiences.

Then again, liberal women in red states didn’t fare much better; Mitch McConnell slaughtered Alison Lundergan Grimes. Yet, in West Virginia, Democrat Natalie Tennant who ran for the U.S. Senate actually did worse than Obama’s 2012 performance in the state.

Granted, Democrats knew this race was lost, but they hoped the margin of loss wouldn’t be so bad as to sink the rest of the ticket, according to Bloomberg’s Dave Weigel. Case in point, Democratic Rep. Nick Rahall, who was elected to Congress in 1976, was booted [emphasis mine]:

She [Tennant] had, like most Democrats, publicly endorsed the president enough times for Republicans to capture photo evidence. Like Kentucky's Alison Lundergan Grimes, she struggled to avoid admitting that she'd ever voted for Obama. She went into Election Day an average of 17 points down to Representative Shelley Moore Capito. Democrats expected her to lose, but were hopeful that she'd prevent a total landslide and bury their allies down the ballot. As was usually the case with Democratic hope in 2014, it was dashed: Tennant lost by 28 points, ceding every single West Virginia county to Capito. Her 34.5 percent of the vote was actually one point lower than Obama's in 2012.

It was one thing for Democrats to lose in the deep [sic] South—that had been happening for years. The destruction of West Virginia's conservative Democratic consensus is something else. Tennant ran as an anti-Obama populist and clawed back exactly none of the voters who had turned on the president. She lost white men by 38 points; she lost white women by 19 points. She lost voters who made less than $50,000 by 15 points, and did so despite appealing directly to them by branding Capito as the candidate of Wall Street.

And, it goes without saying, like Obama, Tennant didn’t win any of West Virginia’s 55 counties.

Now, does that mean the Republican Party is a regional one that only does well in the South? Hardly; but it could mean that Democrats in the South are finished for the foreseeable future, despite liberals lusting over the deaths of old, white men.